I am working with a Powerboost 500 charger from adafruit, and am trying to create a UPS for a RasPI using the Arduino to control some automated functions. I have it almost entirely figured out but need some help figuring out the right components.

The Powerboost has 2 pins that I am using, One pin is connected to the Input power from the wall plug. I am pretty sure I can't just connect this to an input on the Arduino. I small part of me thinks I can but I don't want to release the magic smoke, I am thinking I need to use some sort of transistor or relay that either makes or breaks a connection when the power is unplugged (the pin goes low). Problem is i don't know enough to know what type of transistor or relay to use....

Is thus what you want to do 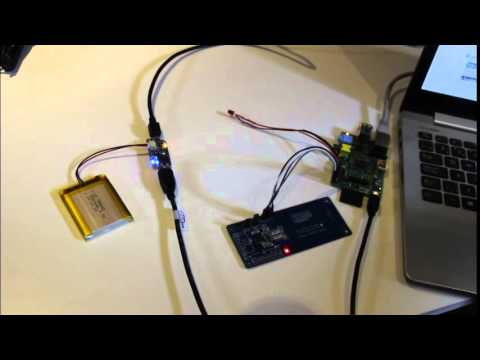 Mike, I'm guessing there is an image there but I can't see it. Last night I got brave (and bored) and decided that since everything shared a common ground I would throw caution to the wind. I pulled the Arduino pin to ground and hooked the Power pin from the PowerBoost straight to. No smoke, Hooray!. Everything appears to be functioning but perhaps I should include some sort of protection?

I'm guessing there is an image there but I can't see it.

It is a link to a You tube video called "Adafruit PowerBoost 500 charger used as a UPS for Raspberry Pi" Which I though was exactly what you were looking for.

for some reason i cant see the link. The power boost with charger can be used as a UPS right out of the box, what I am trying to do is incorperate some intelligent features. I want to have the Pi shutdown aouromatically, disable the output from the powerboost(to conserve power) and turn everything back on when power is restored. I have it working, everything seems okay but its not stable yet. If I run everything with my actual uno board it goes perfect but it doesn't work off board. I have this problem alot. i have a perfboard arduino with headers that I built for fun, and another that I built specifacally for this project. neithr work, some portion of the IO pins are unresponsive, I don't know if its the input or the output but the behavior is slightly different on the two boards, I am going to try and start isolating the issue in the AM

OK, what circuit have you got for the boards? A lot of the circuits on the net miss out the decoupling capacitors because some people think they make no difference but it can cause problems like you are seeing.

If you can't see the link then google directly for movies the words:-
Adafruit PowerBoost 500 charger used as a UPS for Raspberry Pi

Actually mike you told me about the decoupling capaciters when i was trying to figure out my first project.

Sorry, but it supprised me how many people don't know about it.

I'm not even sure if the instructions on the arduino home page include them.

But anyway I've gone over this board for about 2 hours now and can't find anything that looks wrong or differers from past setups. It was working fine but them stopped so I have to assume something went bad. If I pull the ATMega328P It works fine in my Uno Board. I guess I will start replacing pieces one at a time. I did notice when i plug everything in it appears to be workung but only for a moment, any guesses as to which part I should pull first?

Just got it. Defective Crystal!!

Glad you found it.
But

I did notice when i plug everything in it appears to be workung but only for a moment,

Making circuit changes with the power connected is a sure fire way of eventually damaging components.

I am aware, I always power down before removing/adding/changing anything