I have a product that I developed for commercial purposes in Shenzhen, China.
The company that gave me the project refused to pay me my compensation despite I successfully built prototypes and they have tested them.
Since I do not have a company I am wondering if I can give this product for free here. I have everything necessary to go on production: firmware file, PCB files with Gerbers, BOM and source code. All the job has been made by me.

The product is a selectable constant current 3 channel DMX Driver with the possibility to work as a stand-alone unit (playing color scenes) and slave unit (accepting and repeating an external PWM signals).

Would the community be interested in this project? If yes tell me where to post/send the files. I can also sent pictures of the prototypes and offer support since I am the developer of the whole system.
Sincerely,

The company that gave me the project refused to pay me my compensation...

I have had that happen a few times. It is certainly painful. You have my sympathy.

Pickwick:
Would the community be interested in this project?

If yes tell me where to post/send the files.

Thank you very much for your empathy.

The board uses an Atmel AT90PWM316 MCU because of extended operative temperature range, 10 bit PWM signal resolution and presence of the DAC to change current value using dip_switches or jumper. I would like to know, what is the community going to do with my project? Will you produce and make it available for other developers? I do not want to make any money out of this, I just want to prove that the project is working 100% correct.
Specifications of this DMX Driver are:

Thank you for your help. Next post it will come all the PCB and source code files after that my questions have been answered.
Best regards, 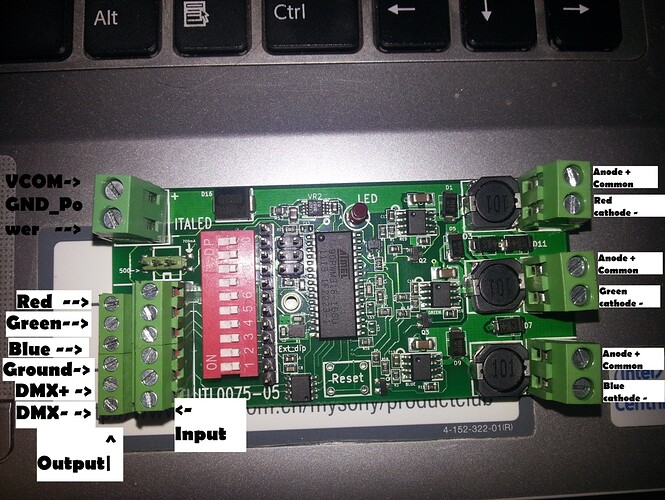 Very nice project, but is it Arduino friendly ?

mcnobby:
Very nice project, but is it Arduino friendly ?

The DMX code comes from a public library:

All the rest of the job comes from me.

If you tell me more precisely how to check if the project is Arduino friendly I will do it. For now I enclose here the source code. I believe it is readable enough as it is, but it could be changed and/or commented if necessary. It is written almost completely in C language so it is portable, the only problem is that I did not make a hardware abstraction layer file but it is together with the main file. The only exception is the routine to change the clock prescaler at the beginning (written in assembler) but still portable among ATMEL MCUs.

If you tell me the other criteria I shall stick on in order to make the project "Arduino friendly" I will give it a look.

thanks for all the info

- I have used that DMX library many times, did you have to adapt it for your chip ?

I actually meant can the software be used within the Arduino IDE ? I dont recognise the Atmel chip as one that is used or is configured in the IDE, but I might be wrong. As soon as I read you are using the AVRstudio to compile/program the chip it made me wonder. Thanks

mcnobby:
thanks for all the info

- I have used that DMX library many times, did you have to adapt it for your chip ?

Yes, the library was written in C++ language that I "downgraded" to C. Furthermore I changed the names of the registers in order to make them match with the Atmel headers files definitions (for example from the original UCSRnA to UCSRA).

mcnobby:
I actually meant can the software be used within the Arduino IDE ? I dont recognise the Atmel chip as one that is used or is configured in the IDE, but I might be wrong. As soon as I read you are using the AVRstudio to compile/program the chip it made me wonder. Thanks

Actually I see many Arduino boards use Atmel ATMega MCUs. The MCU AT90PWM316 also belongs to the Atmel ATMega family so I do not see any reason why it shall not compile. I do not know if in the Arduino IDE is already include the header file with the registers definitions but the fact it is written mostly in C shall assure the portability among different developing platforms.

Anyway tomorrow I will try to get started with the Arduino IDE and see if I am able to port the project in this developing environment.
Stay tuned,

I gave a look to the arduino IDE and the process of porting from AVRStudio to Arduino IDE sounds more complicated than it appeared at the beginning.
I have to confess that I did not have a lot of time recently.

Anyway has anyone already done a similar job? If yes can you tell me which sources I shall look at? Shall I make a new post for this issue?

I'll suggest post your code and hardare files along with other files on the GITHUB rather than at this place because it can be easily lost.

thanks for the tip. Actually now I have an ever more ambitious plan: I want to learn the Bluetooth LE and the Arduino IDE.
The learning curve is much bigger than I ever thought before.
Since I have one SPI gate to spare I want to add the RFduino and add Bluetooth support, so we can translate from DMX to Bluetooth.

I think it could make the product even more interesting.
Stay tuned.
Regards,

Well its an ambitious plan and a good one but you may want to revaluate your plan to know that whether you definitely need BLE rather than the conventional Bluetooth which is the 2.1+EDR, 3.0 etc!
ONly if you think your gadget is going to be battery powered then you should think about BLE else! not much use.

Hi There, just to add a little into this, we have been looking at wireless DMX...