I only have Visual Studio 2012 and I do not believe project files are backwards compatible. Maybe someone with 2010 can rebuild the project file to make it 2010 and 2012 compatible for me?

Hope someone finds some use from this, if you have any questions/compliments/complaints just let me know.

I need to brush up on my C# knowledge for some upcoming work projects and I'm not a big fan of the console application in the VisualStudio plugin or the native Java implementation in the Arduino/Wiring IDE.

What I wanted from a console.:

In the attached screenshot you can see everything above is implemented and the console is showing some test data from the protocol I am writing for my Arduino projects. I hope to release this in the next few days, though the break over the holidays might delay that. In any case, if there is any other features you have been looking for in a console app but did not want to take the time to write your own, feel free to request them and I may incorporate your idea in the initial release.
Keeping with the spirit of Arduino, I will put the source on GitHub when I make the initial release so you can modify/fork/contribute as you see fit. 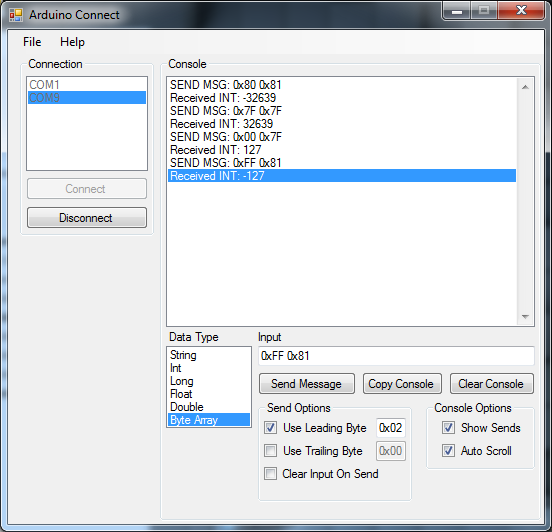 Now released! The exe requires .Net 2.0 to be installed to run. I believe Vista and greater come with .Net 2.0 already installed. Windows XP users will need to find the installer.

I'm new here, not sure if this is the proper place to ask.

I wish to make a visual studio C# program to have serial communication with my Arduino R3. is there a code available here? or file that can be used as reference?

thanks. if I'm at the wrong wall please direct me to the preferred one.

This is a C# application and it was written in visual studio. You can use the github link to get the source. You should note however that I am not going to work on the visual studio version anymore and instead am working on a GTK (Mono) version for cross platform use. That branch is already working well it seems and should be fully tested/bug fixed sometime soon.