I guess I declare "Beta Test."
The idea is to have a single-sided board design suitable for typical "hobbyist" PCB fabrication processes like toner transfer; the minimum track width is 0.6mm, the minimum clearance is (mostly) 0.5mm, and pads were made as large as possible for easier soldering.

This is both the EAGLE cad files and PDFs for bottom and "silkscreen" that should be ready for printing and toner-transfer (photo processes may require reversed printing.)

There's no documentation yet, beyond what's in the EAGLE files (info there is somewhat expanded from the original.) 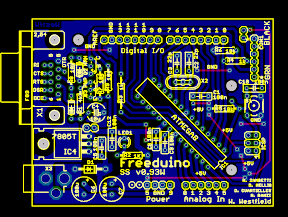 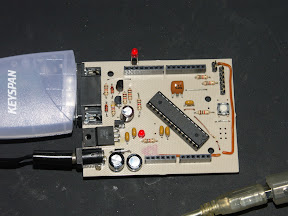 Use this thread for suggestions, bug reports, success reports, etc...

Arrggh. In the process of flipping the questionable cap in the rs232 section around, I seem to have introduced an inconsistency between the board and schematic. They're both correct, but they have a different name on one of the nets.

I'd like to be a beta Tester - or Beta Maker.
I'm interested looking into DIY made boards, different materials and different processes.
Etching, engraving, cutting.
Im a graduate researcher in design from UK. Have access to a sort of Fab lab, CAD machines 2d + 3d and experimenting with applications of this process.

A question - I downloaded the files you provided - and looking at PDF included, not so much experience with EAGLE yet ( your instrucatable on that helps though :D)

What I want - or want to know is how to go from EAGLE .brd + .sch to PDF - or better still .DXF or something that a CAD machine / program can import or read in.
I had managed to get from the original Arduino SSS pdf to DXF to a 2D CAD software and engrave on our workshop laser cutter, but more for fun and aesthetic value.
However, I am serious about making it a working board though, and without using etching acids and stuff.

Looking at the vector illustration of your PDF and the SSS one it seems different produced, lines rather than shapes, I was wondering how it is produced / exported.

If you could let me know - or wanna dicuss it futher. Please get in touch

There's an instructable on outputing CAD files from eagle here: Exporting EAGLE for board houses

I made the PDF files in my download by using the EAGLE CAM processor to output postscript, and then converting the postscript to PDF (using Preview on my Mac.) I suspect the SSS PDF file may have been created by "printing" to a PDF pseudo-printer.

The FTDI USB to TTL converter connector is the 6 pin in line connector, right?

The cable used in the picture is a serial to USB converter, right?

My doubt is: what difference does it make on using one converter cable or another? Does this feature (USB to TTL connector) have some advantage over USB to serial cable connection? I meant beyond being useful for those who already has the USB TTL cable?

Yes, and yes. Using a USB to TTL converter eliminates the need for any rs232 level conversion, which eliminates a fair number of components (this might not be clear in the posted pictures, but if you build the board for use with the FTDI cable, you can leave off a bunch of the other components (and you don't need to drill holes for them, etc...) Sorta like: 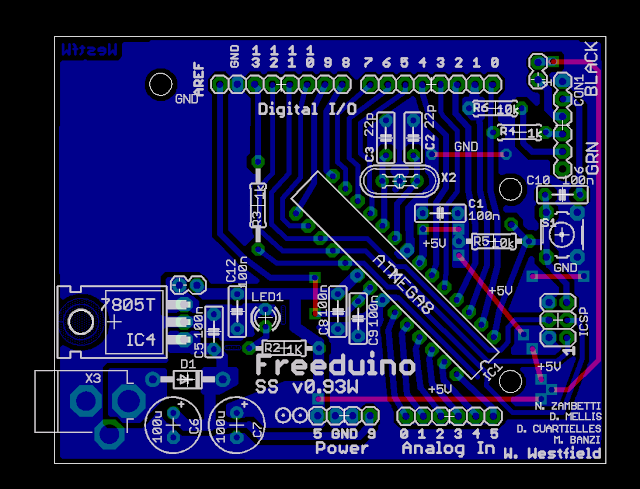 Harder and more expensive to connect.

Like the bare bones board it's intended to be programmed and shoved in a project.

Ordinary serial to ttl cable is easy to make and the parts fit in a back shell.

Harder and more expensive to connect.

but the title of the post is "New Single Sided Serial Arduino clone...", not "New Bare Bone Board TTL",
that's why I said "removing serial circuitry" is not a good idea. And I repeat: it will become a Arduino TTL, not serial.

USB to TTL is 20, a serial to TTL is easy to make, but serial cable is cheaper than 20, and easier to make than any other kind (even if soldering all nine wires). And I think we're talking about the easiest Arduino project, that we can make at home, by amateur people (too). Easiest not only on making the board, soldering, connecting to computer, spending less money, and having fun. But all this together.

The whole point (IMO) of going the "open source hardware" direction is so that people can make (relatively trivial) modifications that more closely fill their exact needs. The "bare bones" version of the single-sided serial arduino is one example; I also did a version with no power supply circuitry (USB-powered via TTL-serial FTDI cable only.) Who wants to drill more holes than you have to?! (another thing that occurred to me was that an arduino with a non-standard connector (say, serial on RJ45) might be less likely to wander away from a classroom...)

just wanted to say that though the idea of boards running away from the classroom is not very attractive, being the cost of making the boards is so low, I prefer to let the students "steal" some by the end of each term. It helps the project growing in unforeseen directions. Non-standard connections are in essence non-open, from my point of view ... but that is meta-babling around hardware and it is maybe unnecessary :-), won't make it again, I promise.

Besides that, I love the point of the rotated processor, boards need some physical characteristics that make easier for students to see how they are plugging things. That is why we make Arduino look a little funky.

but that is meta-babling around hardware and it is maybe unnecessary :-), won't make it again, I promise.

Actually, I hope you don't stop--at this stage in the whole open hardware "movement" meta-babbling isn't a bad thing--particularly from people who have backed it up with action.

I found your description of allowing boards to disappear at the end of the term interesting--particularly in terms of engendering a sense of "ownership" and comparing that with a similar goal the OLPC people have. By ensuring one person really does have ownership of one machine they hope to gain the benefits of care and investment such a sense of ownership can provide.

It's a matter of budgeting. On the one hand, there's no particular reason why a take-home arduino shouldn't be included in the price of the average class that teaches you to use one. On the other hand, if there's no budget to replace the arduino for the next class to come along, that's a big problem!

In my case, since I removed any text books from my class, I don't feel bad at all when asking my students to buy their own parts. But that cannot be applied to every other case.

a US$34 board as a required purchase isn't all that bad, considering many technical textbooks are on the order of US$100.

I would imagine letting the boards walk away saves a great deal of effort maintaining and troubleshooting them after a student has been (ab)using them for a full term. Or two. Or three.

will this work with an atmega168 as well? not sure if they are the same in pinout and such..

Yea, the ATmega8 and ATmega168 are pin compatible.

Has this project been scrapped, surpassed or moved?

Eagle files are a Dead link.....any chance of uploading again, would also love the files for the FTDI cable one pictured below if possible?

If you're talking about My eagle files (single-sided equiv of the original SSSB), geocities went away and the files have been moved to http://homepage.mac.com/westfw/.Public/arduino-ss-071029.zip

I took a brief look at shrinking a version with no serial conversion down within the original formfactor outline, and it's pretty difficult to do...

Thanks westfw, sincerely appreciate those files. :-*