Hi folks,
Brand new to Arduino. I need to control 32 individual LEDs that will either blink, be on, or be off depending on which midi note numbers are received...

From what I can tell, I will need the Arduino Mega for this, is that correct? I see the mega has 54 digital i/o. Does that mean I can hook 54 LEDs, or 27?

This will be a project where it will be built and then live inside a rack, so is there any way to use one of the cheaper boards and just add more outputs?

There are lots of options for driving 32 LEDs from a "non-Mega" Arduino. The MAX7219 is popular, as are "power shift registers" like the TPIC6C595.

In fact, you probably don't want to drive all those LEDs from a Mega, because there are limits on how much total current you can pass through the ATMega CPU chip.

Check the interfacing area in the Playground, and do some searches of the forum for terms like "LED matrix" and "shift register": you'll find plenty of examples.

Hi,
Thanks for the reply. I've seen these LED matrix boxes...I'm looking for something pretty different. Let me clarify more what I need:

Here is a picture of one of the triggers: 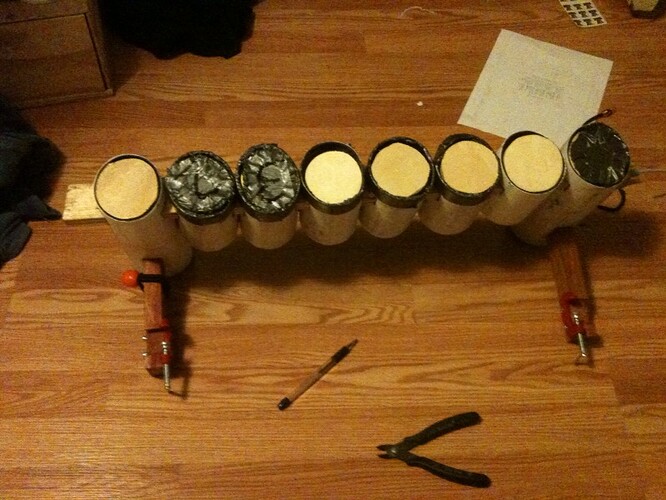 I have a pen in there so you can get a general idea of the size. Now there are four of those around the stage and connected with DB9 cables to the midi controller. So on each of those individual pads, I want to mount an LED that will turn on when activated that pad has been activated and is receiving the MIDI feedback messages from ableton...

I'll have the Arduino in a rack and connect the LEDS with their own DB9 cables.

I'm good with audio electronics but still very green with all of this computing stuff. Would I just use an arduino and then have some sort of driver circuit that is controlled with one of the above mentioned drivers?

OK-reading a little more on that max7221 it looks like this is something I can use for this project...