Hello all,
I'm faced with the challenge of building a robotic arm but minimal knowledge about electronics and programming. Now I have an Arduino Duemilanove and 6 4.8 volt servos but I can't find any helpful resources to design and build the arm. Can anyone help me?

Now I have an Arduino Duemilanove and 6 4.8 volt servos but I can't find any helpful resources to design and build the arm.

If that is the case, then you are probably not up to the job. Maybe the below will get you going.

Thanks for the help but I still can't find anything...

If your question is the second, I can only sympathize that I have similar problems: doing simple mechanical design.

If your question is the first instead, I recommend you start with a little simpler project and work up to the robot arm. For example: project 1: get the Arduino board to blink an LED; project 2: build a circuit and write Arduino code to play a tone on a speaker (this will teach you the Pulse-Width Modulation (PWM) technique you'll need for the servos); project 3: build a circuit and write the code to wiggle two servos (this project lets you get everything working without having to think about mechanical design); project 4 - finally - mount the servos on wooden arms and program your new robot arm.

My problem is more with connecting and programming the servos
and no, unfortunately i can't buy lego technics 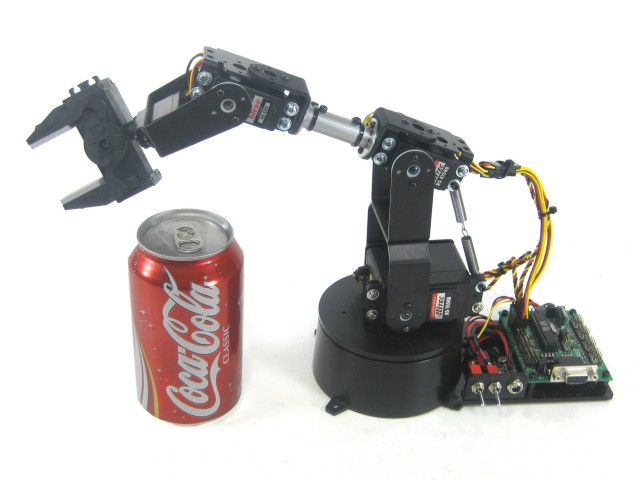 AGGGZ4?, What is your situation? Do you have a time frame to do this in? Is it for college, school, work or hobby?

One of the things you do is write goals. Write down the steps you think you need to complete this goal. Are the steps specific enough?

Have you checked with the society of robots? They can also help with direction.

It is for an extra-cirricular program, I must make one myself, it needs to be done within 2 months, and thanks for the advice.

Would you control it manually with switches or joy sticks or should it move on it's own?

So first I need to know how to properly set up the servos. I have 2 4AAA battery packs and 3 colors of extra wire, but will I need anything else? Such as a bread or circuit board.