No errors but it is doing nothing

Hello, I am making a phone following robot but It won't work. There are no errors but it won't work. I am using an arduino uno and using blynk iot app. I used a multimeter to check if there is problems with the wires and connections but there are none. I am using a l298n motor drive. I have it connected to the arduino but I feel like the arduino is doing nothing please help. I have attached all of the code. I am trying to do it by watching hacker shack at Make an Autonomous "Follow Me" Cooler - Hackster.io 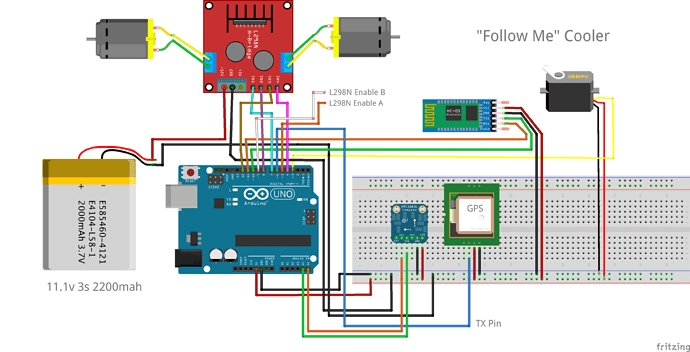 This is one of those cases where it's imperative to test as you build. I may be wrong, but seems to me you just went ahead and followed the other guys' instructions and tested at the end?

You need to go about a project like this in a logical fashion, even if you're going according to some design that already works.

Did you test the major parts of that build in isolation? You need to as a minimum I'd say test the L298/motor subsystem with some code that does nothing but check that works, similarly you need to test the GPS and the compass by themselves. Use a simple bluetooth terminal type app on your phone to send simple commands to the HC-05 and check that the Arduino can (eg) just print them out.

I doubt if anyone here is going to wade through that ton of code you posted, especially since it's presumably known to work for the other guys already, and anyway, that chances of anyone having the exact same hardware as you have to test it are pretty much zero.

@
fionning_macara
very good response.
you wrote straight down to the point..

uddhavkurandawad:
Hello, I am making a phone following robot but It won't work. There are no errors but it won't work.

What is showing up in the debug serial output?

Hello everyone,
I actually did test every single part of my project

How do I debug the code?

Can you be a lot more specific? For something this complex knowing exactly what it's supposed to do and exactly what is does do is critical to knowing where to look in the code and/or construction.

It is basically a robot that can follow a phone using bluetooth and gps. I am using blynk to connect it to my phone. The bluetooth connects but for some reason it wont move or do anything

If none of the Blynk hooks work add a bunch of serial prints to show what does.

Maybe the first thing to do is check for a successful connection:

Is there any chance of you posting your wiring diagram?
The one on the website you provided won't let me download the wiring diagram they used.
Would be great if you posted the diagram you followed.

I just edited the post and put the diagram. I did not use the servo so the servo does not matter

I'm still wondering what shows up on the serial output.

Have you set the baud rate correctly?

Other post/duplicate DELETED
Please do NOT cross post / duplicate as it wastes peoples time and efforts to have more than one post for a single topic.

Continued cross posting has resulted in a time out from the forum to allow you to read the links below.

Could you also take a few moments to Learn How To Use The Forum.

Other general help and troubleshooting advice can be found here.
It will help you get the best out of the forum in the future.

Yikes! I would work on that first. Print a message in setup() and make sure you can read that message on Serial Monitor! Without debug output, it will all be guesswork a to why your sketch is not doing what you think it should.