No life after Uno R3

Hi guys,
After I connected my first Uno R3 to my laptop, none of the older boards or programmers work.

Is there maybe an issue with a windows driver or am I missing something stupid here?

Did you install the new USB driver that came with the Version 1.0 of the IDE? It is different for the Rev 3 board.

Do any of these devices show up in Device Manager when connected to the system?

Did you install the new USB driver that came with the Version 1.0 of the IDE? It is different for the Rev 3 board.

Nick,
As far as I know, yes I did. I have had the Arduino 1.0 running for some time already.
The sad thing is that the older stuff is not working anymore.

Do any of these devices show up in Device Manager when connected to the system?

Louis
They all show in the device manager. The IDE does not talk to them. I get a stk500 timeout. or sync problem.

Since they all show in Device Manager, then we can focus on something with the IDE.

When you say the IDE does not "see" them, do you mean none of the COMM ports show up under Tools -> Serial Port menu?

Louis
They show in the list but I get the

error. When I say "does not see" I mean does not communicate. This happens for the programmer as well as the boatloader.

I have been able to get the Uno R3 to program via the bootloader that it comes with but only under Arduino1.0. Arduino-1.0 also does not see any of the AvrIsp programmers

Arduino-0022 does not see anything at the moment.

Marius:
They all show in the device manager. The IDE does not talk to them. I get a stk500 timeout. or sync problem. 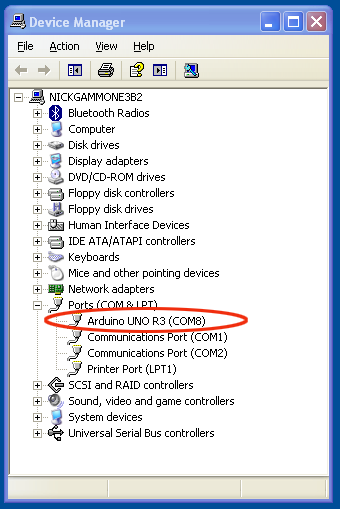 And then show that you have the corresponding port selected in the IDE (in my case, COM8).

Nick,
I almost feel that you think I am telling lies.

Sorry I can't capture the menu option in Arduino IDE but I promise they are all there.

Well the mind boggles at 38 COM ports. Perhaps Windows is at fault.

Maybe your comport-numbers are too high.
A quote from the trouble shooting guide:

On Windows, the COM port assigned to the board may be too high. From zeveland:

"One little note if you aren't able to export and your USB board is trying to use a high COM port number: try changing the FTDI chip's COM port assignment to a lower one.

"I had a bunch of virtual COM ports set up for Bluetooth so the board was set to use COM17. The IDE wasn't able to find the board so I deleted the other virtual ports in Control Panel (on XP) and moved the FTDI's assignment down to COM2. Make sure to set Arduino to use the new port and good luck."

On the Mac, if you have an old version of the FTDI drivers, you may need to remove them and reinstall the latest version. See this forum thread for directions (thanks to gck).

Erni,
It wasn’t a problem before. I used Com31 for the Arduino from the start. It is only after the Uno R3 installation that things are buggered. I strongly suspect the windows driver.

Try the loopback test instructions from this link: http://arduino.cc/forum/index.php/topic,73748.0.html

If this passes, then you can be assured the serial portion of your Arduinos are working as expected.