Not too early to think Halloween..

So, this year I intend to make the front of my house Animitronic via Arduino.

The "eyes", which may end up movable, will be semi-opaque plastic bowls, under which will be 1 watt White, Green and Red power LED's. The main fangs will be a dowel in the center with a ring at the other end, covered with cloth, with Red and White power LED's in them also. Two 40w black lights under the awning (used them for years) along with fog machine, which this year will also be driven via Arduino as the central controller, via some handy OPTO22 Solid State relays I picked up. More of the relays will be driving a couple of xenon strobes also. I have outdoor speakers I toss under the hedges. I'll see how good a system I can get to synchonize with the sound coming through the speakers... would love to modulate some green and UV LED's in synchrony with voice, etc.

That big orange thing is a huge obnoxious inflatable pumpkin I picked up years ago. It's legendary in the neighborhood. The green is fake spiderweb, I get the kind that lights up with black light. I've picked up a pack of 100 UV LED's, some of those might be added along the edge of the roof to light the webs.. very cool effect to fade them in with PWM, I'm thinking... I've got tons of LED's around at the moment, might as well use a few. My house has become a favorite for the neighborhood kids over the years, Halloween is just good clean fun. 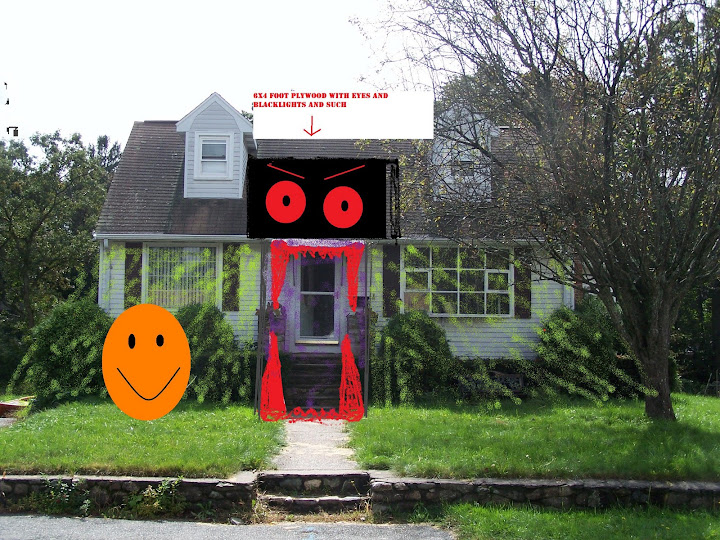 The Eyes and the upper Fangs:

It’s all going up over the next couple of days…

The eyes are three one-watt LED’s per color, RGB plus White. They are being fed by LM317 current sources and switched/faded with PWM via small-signal NPN transistors. I have to change the base resistors though, I made a miscalculation… the LED’s are only getting around 120mA in this video, as opposed to the 350mA that they want. I’ve left it that way during the rest of the building as at 350mA the afterimages last for hours… The whites are also not on in this video, they are just too dang blinding at the moment. The Arduino is just running an extremely basic random fade program:

So, has anyone else Arduino-ized Halloween this year?

LOL! totally forgot about that! Very few memes actually get me… but that one for some reason made me laugh. Just weird enough to be funny, no drawn out punchline. Oddly, I found the spinoffs more amusing than the original. There’s one circulating now that’s way too inappropriate to mention here, but I can’t stop cracking up over it… web humor moves fast sometimes…

I should put a high-powered strobe (hmm, maybe my studio head…) right inside the door. BLEEEEAAAARRRGHHHH!!!

Video name changed and audioswapped with some Drowning Pool. You know I’m going to HAVE to do it now that you’ve said it… at least take the shots and edit it in…

It scares me, sometimes, that I'm even aware of some of this stuff. Well, spend enough time on Fark, and you wind up hearing about just about everything that's on the web in some form.

I agree, we shouldn't mention that rule, or that BBS. ]:D

it looked better in my text editor...

Waiting for the rain to stop, then a buddy is dropping by to help me heave this up on the roof. Electronics are now mounted on the back (and since weatherproofed). The control signals are brought up to the rig via the telephone jack (four wire) plus a ground. Weatherproofed by hotmelt gluing an old plastic shoebox sized tote over it. It may snow here tomorrow. 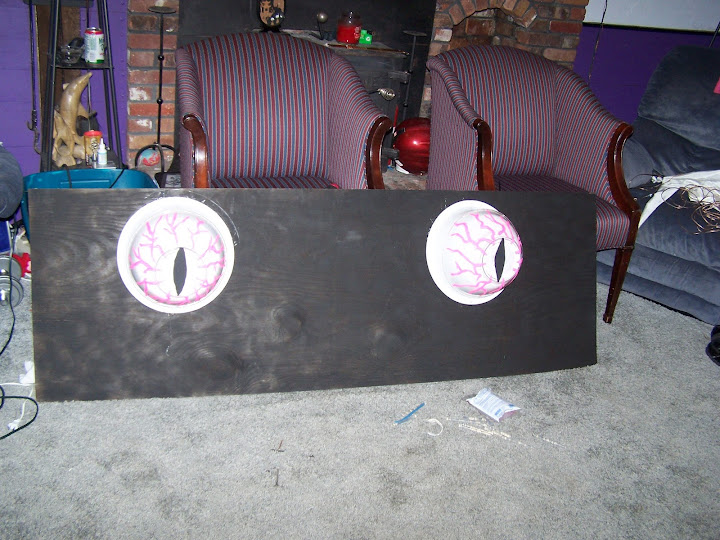 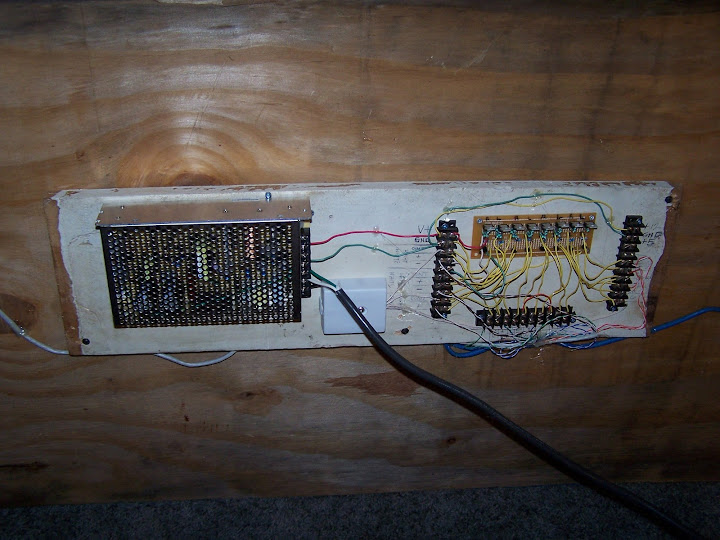 Moderator: Would you please move this thread to the Exhibition forum? I think it's probably more appropriate there. Started the thread as a way to spark people's creativity.. but it's become a bit of a project log. Thanks!

The blizzard that hit New England basically "jackpotted" on our town.. Halloween was "delayed" for the kids until yesterday. We got nearly a foot of snow, but the real problem was downed trees, power lines, and poles. There are still some folks in town without power since Saturday. I lit the house for several days with power LED's run off a cable leading to the car's battery...

In any case, here's some shots of the setup.. was scaled back a bit due to the damage and time.. we're clearing downed trees in the back yard... 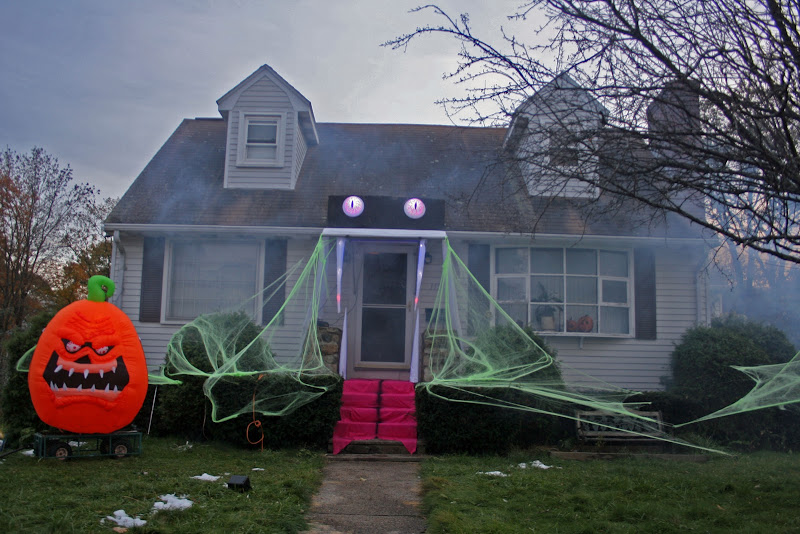 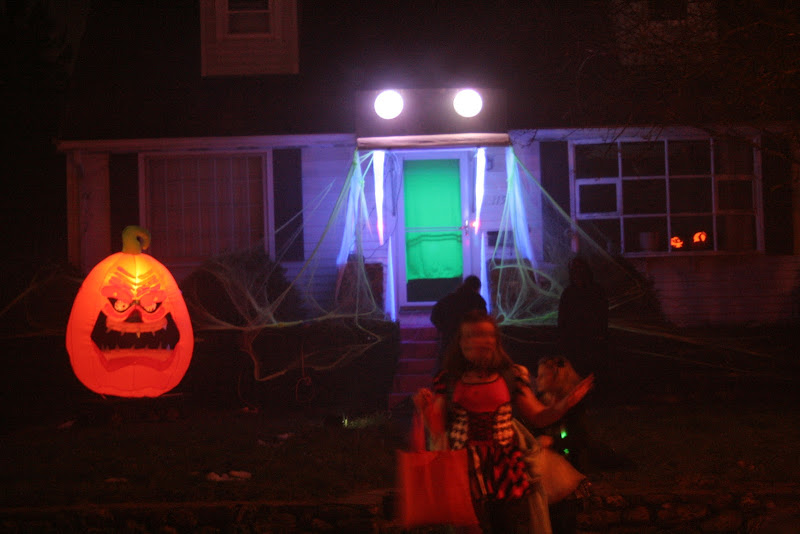 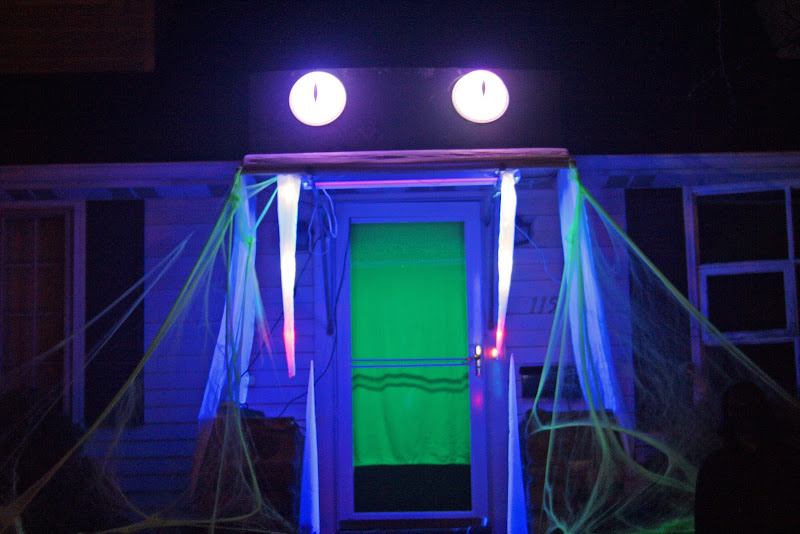 Looks like your were able to charge your Kapacitors!

What about trying something more audacious?