I got some ancient 5x7 flip dot displays without any kind of controller (there are only diode arrays). I already mapped all pins and dots. To turn them on 18 dots need current in one direction (from negavie common terminal to 18 individual positive terminals) and 17 dots are opposite (positive common terminal and negative individual 17 terminals).
To turn them off this is reversed, but I'm not worrying too much about off phase, as I plan to turn off ALL dots at the same time (or in groups) and then redraw. This will not only simplify circuit, but actually the only possible way to do it, because I discovered that magnetic fields of neighbor dots interfere when flipping to "OFF" position, so I have to flip them all off before update (no biggie since it's for the HH:MM clock).
Anyway, to my transistor dilemma. I'm not totally grasping difference between NPN vs PNP. I think that I need 18 NPN transistors to connect some dots to ground, and 17 PNP to connect others to the VCC. There's no shortage of NPN transistor arrays, but I can't find any PNP arrays.
Can I use NPN for both groups?
According to specs I was able to find each dot draws max 120mA, but in my testing I'm seeing around 10-15. Voltage needed is 24VDC
I'm attaching my very very rough schematic for single display in case my explanation is not very clear.
Just to clarify, it only shows one row of dots and I will use shift registers and other components to save on digital pins of AVR... 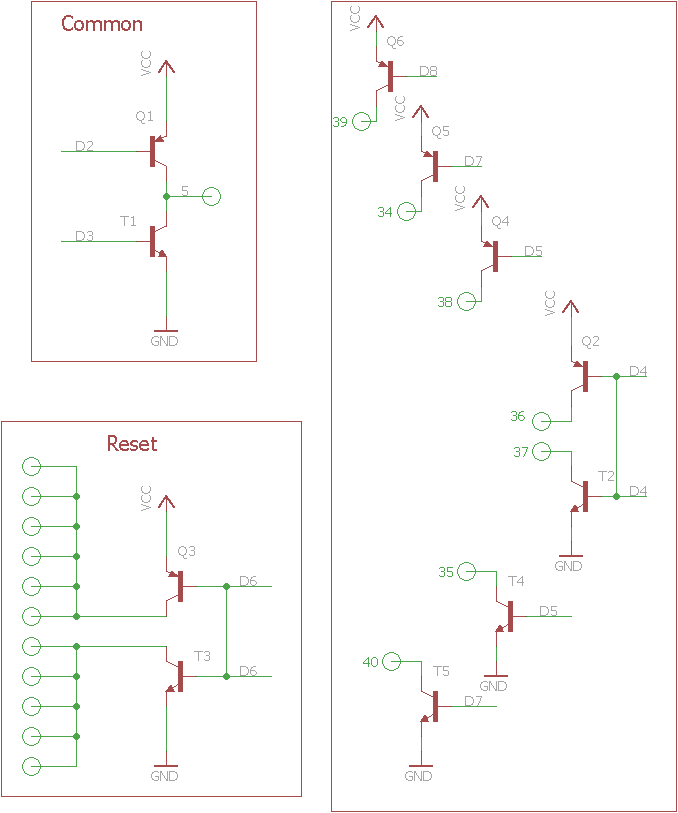 To further clarify. I made following schematic using only NPN transistors. 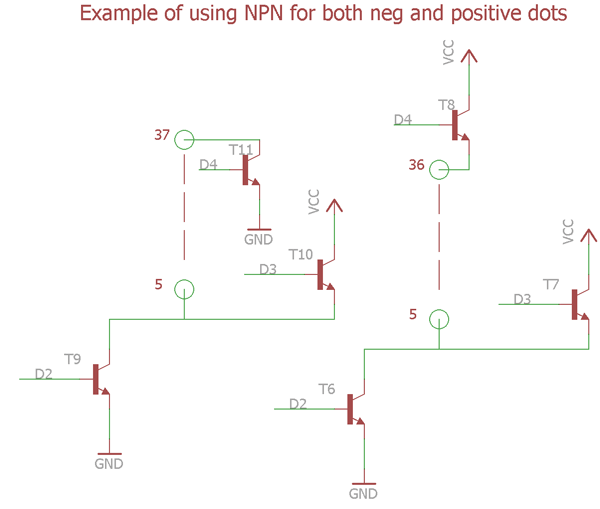 I guess you want to make sure you never turn on both D2 AND D3 at the SAME time !

raschemmel:
I guess you want to make sure you never turn on both D2 AND D3 at the SAME time !

oh right! :o Might need a diode or polyfuse somewhere just in case

If this is how it works, then this electromagnetic operation appears works in the same manner as controlling a dual coil latching relay.

I wonder, if the terminal 5s are joined together and connected directly to GND, wouldn't it simplify the control? Terminal 36 would be the "Set" (ON) terminal and terminal 37 would be the "Reset" (OFF) terminal, reducing the control down to 2 transistors per dot.

The control signal for dual-coil latching relays is just a short duration pulse, is it the same for the flipdots?

Jumper the 36 and 37 control terminals together and connect to power (+24V). Switch each respective terminal 5 to GND with an NPN transistor (one for Set, one for Reset).

According to the Flip Dot explanation you linked, it's exactly like and H bridge bidirectional dc motor driver. ( only one coil necessary ,polarity alternates)

only one coil necessary ,polarity alternates

... this same as single-coil latching relay where opposite polarity needed for Reset. More difficult to control as H-bridge style driver needed.

If 2 separate coils are available ... only 2 control signals / 2 transistors needed.

Yeah my flip-dots are essentially a a coils with magnetic disk on top. Only difference disk doesn't rotate, there's no axis rod. It flips like book page in a binding. This creates unexpected issue. When dot repelled by magnet to off position, magnetic field moves neighboring dots and turns them off. So there's really no reason for me control individual dot's OFF state as mentioned in the beginning.

I really like your schematic! I'm not sure if it will work tho because #5 connector is actually connected to all dot's coils already, so there's no separate 5s, it's just single bus 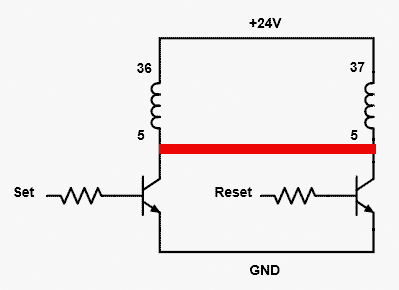 There must be still a better way to control them, but I've yet to figure it out. Gotta be a reason manufacturer wired them in a such a way that each dot in a column needs oposite polarity to turn on/off...

Oh yeah I spent a very long time researching about controlling flip dot display, and certainly a lot of suggestions for using H-bridges. They seems like perfect solution, but I didn't find one that can control more than 2 pixels... Do you know of any that have like 16 outputs?

I should've posted it in the beginning, here's somewhat useful schematic of this display (it's missing some info, and that big reed switch acts as giant on/off switch for whole display. But I'm not really sure why). 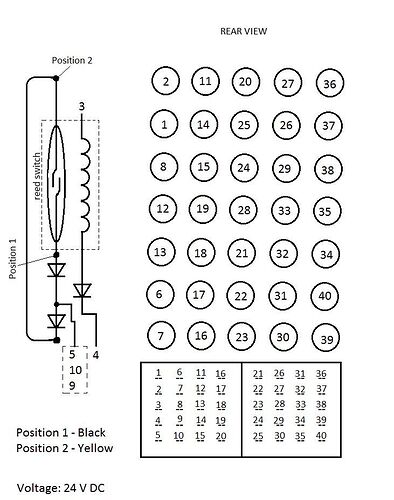 Thanks! I'm working on both Nixie clock and Flip Dot clocks right now. Driving me crazy, but it's a lot of fun

Have you ever seen the miniature 5x7 dot matrix red alphanumeric displays ?

The reed switch may be for flashing .

Thanks for the info ... if my understanding (on the actual interconnections) is correct, then I think something like this could work. If you're creating a PCB with surface mount components, there are low cost transistor arrays equipped with resistors available.

500 mA, 50 V NPN/PNP double Resistor-Equipped Transistor
This low cost chip replaces the 4 resistors and 2 transistors for the ON control.

H-bridge is not required because there's a separate master (all) OFF control.

raschemmel:
Have you ever seen the miniature 5x7 dot matrix red alphanumeric displays ?

Haha, nope never seen those before

raschemmel:
The reed switch may be for flashing .

What do you mean for flashing?

dlloyd:
Thanks for the info ... if my understanding (on the actual interconnections) is correct, then I think something like this could work.

H-bridge is not required because there's a separate master (all) OFF control.

I'm still trying to understand this schematic, but I think it will only work for half of dots because common (5) is not reversible... (i.e. it needs to be connected to Ground or VCC)
I took another long look at my original schematic and realized it's complete garbage

Reset circuit connects all dots so that's a fail right there

So I'll just need to control each dot's ON/OFF state.
But I think I finally figured out a way to get this working.

So there are basically 3 control "cores". One controls polarity of COM1 bus. Second one controls polarity of COM2 bus. And finally 3rd "core" is individual transistor switch that connects each inductor to the COM1 bus.
Schematic shows one row of flip dots, so there will be 4 more. Looks like I'll need 35+2+2=39 NPN transistors or 5 darlington arrays. And I have some idea about multiplexing all 4 displays which should required just 4 more transistors... I hope I'm not way over my head with this one

EDIT: Just realized that it (3rd "core") will only work in one direction because transistors only let current pass one way... Back to drawing board ....

What do you mean for flashing?

Flashing the display on and off rapidly is less software when you have a single Enable signal. This is a convenience. Without it, how would you make the display flash on and off ? Would that not be more code if you didn't have that enable (or DISABLE) signal ?

raschemmel:
Flashing the display on and off rapidly is less software when you have a single Enable signal. This is a convenience. Without it, how would you make the display flash on and off ? Would that not be more code if you didn't have that enable (or DISABLE) signal ?

I don't think this is applicable to flip-dot displays. Power pulse only required to flip pixel. It stays forever in last position when power is turned off. It's somewhat similar to e-Ink displays.

Before you guys start laughing at my poor understanding of Transistors, I re-did my schematic again

I realized that the way display is wired right now (one pin of each inductor tied together in one bus) is not ideal for me to drive as is. Being more familiar with LED arrays, I will rewire flip dot display (I might have to cut some traces) in similar matrix with rows and columns. This way I only need to control 5+7=12 IOs. With 2 transistors each, that's 24 transistors total, or 4 darlingon arrays. 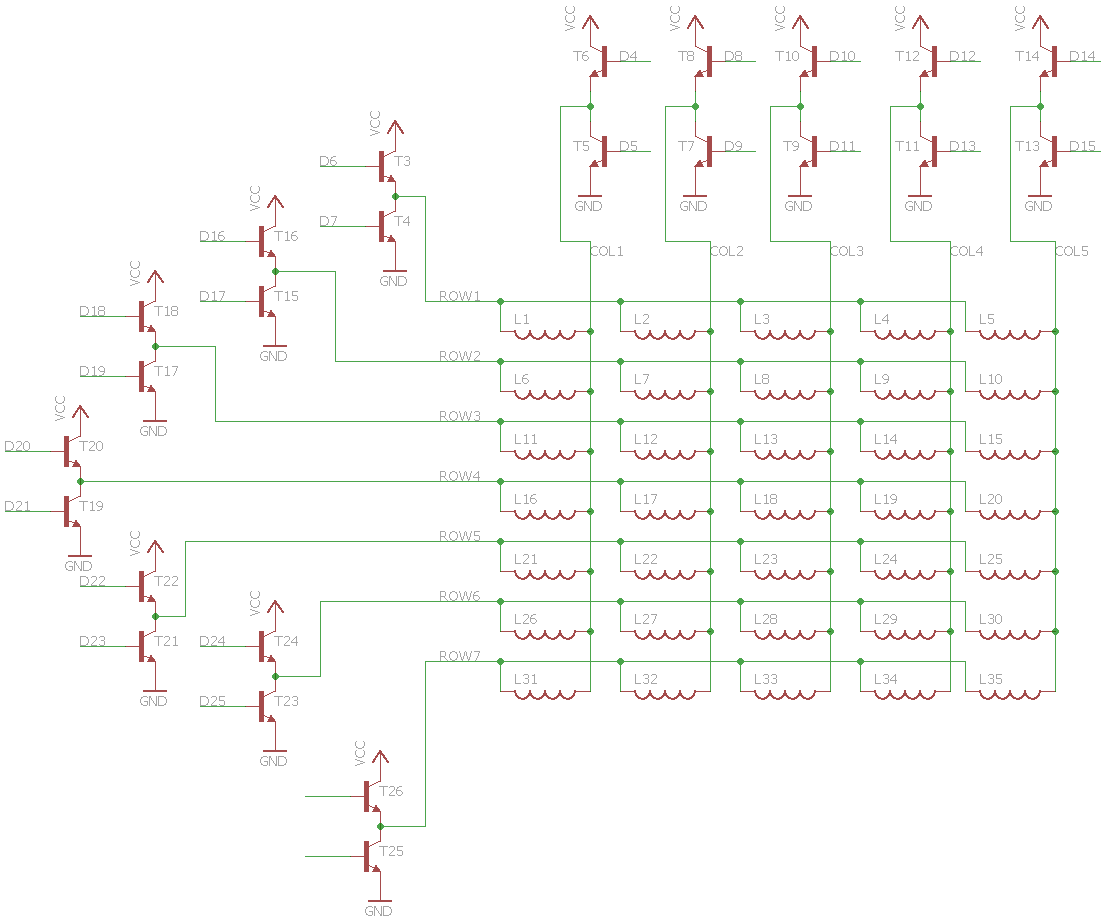