I'm using a standard Nrf24l01+ module inside an aluminium case for a remote control application. I assume this will not work (in an aluminium case) because the case will act as a RF shielding thus killing any usable operating range.

One solution that I can think of is making a slot on top of the case to get the PCB antenna out of the case and exposed to air. That might work, but I find it an inelegant solution and I would rather use a small external 2.4Ghz antenna.

I do not want to use the long range Nrf24l01 + PA + LNA with antenna module because my project is a near range application that must be powered with a small battery.

On the other hand, I also found this hack on the internet: https://hackaday.io/page/476-nrf24l01-sma-connector-mod

This looks slightly tricky but I really like that solution if it can be proven to work.

Antenna connectors for PCB are cheaply available on aliexpress as are small 2.4GHz antennas such as this one or this.

That's how the proposed hack looks according to the link above. 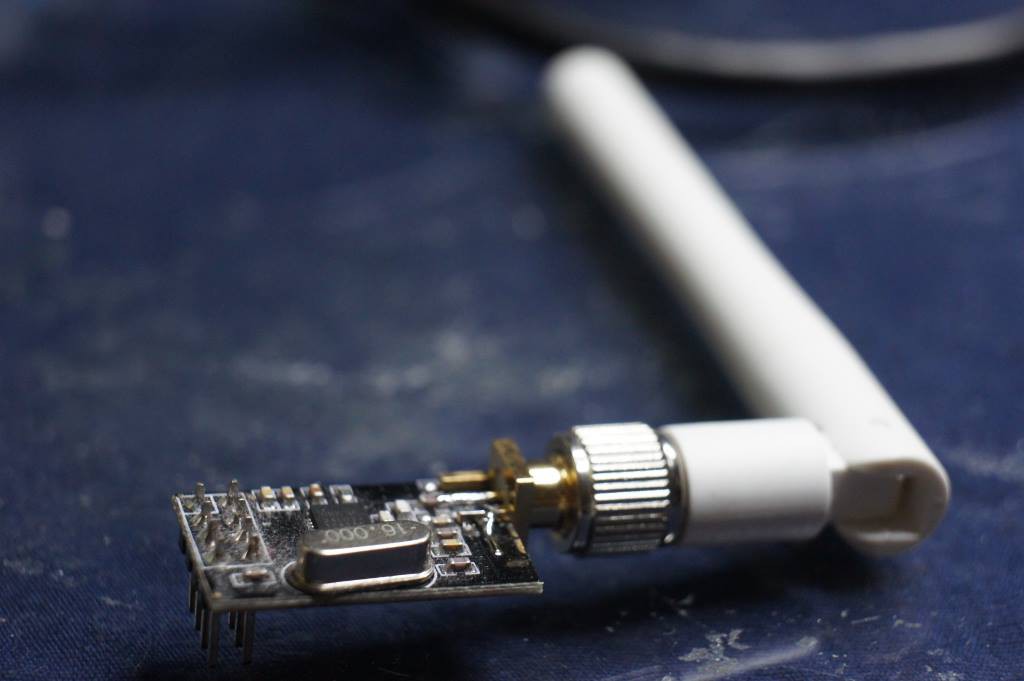 What do you think, is that a proper solution? Other ideas?.

I don’t see the advantage of that hack compared to a high-power nRF24 that is designed for the external antenna.

I have sawed the PCB antenna from an nRF24 module and replaced it with a short piece of insulated wire (just to get a smaller overall package) but the wire is flimsy and tends to break off at the soldered joint if I am not careful when handling the device.

I only use the device for short range so I have never needed to find out what impact the modification has on the range.

Wouldn’t it be a lot simpler to use a plastic case?

Thank you for your reply. I can't use the high power version because I want to make something really compact which is battery powered. Like a remote control that can be held on a single hand. This means a small as possible battery. My understanding is that the high power RF24 uses a lot of power and it can't even be powered through the MCU board regulator. Also, I only need a few metres range.

The subject of the battery and the management of low power has been discussed in part in this thread http://forum.arduino.cc/index.php?topic=596661.msg4053723

A plastic case is not currently an option due to aesthetic reasons.

Battery usage depends on the length of time the nRF24 is transmitting. I doubt if the high-power version uses any extra power (compared to the other version) when it is dormant - but I confess I don't have a high-power version.

You have not told what your project is all about, It is much easier to give useful advice when we can see your questions in their proper context.

Maybe a HC12 module (433MHz) would be more suitable as it has a different style of antenna.

The project is a remote control for the driver or a ridable train in a park. There's already a wired version implemented and running. Now we want to turn in wireless. The remote will display data such as train battery voltage, motor temperature and load, and actual speed. This is all dynamic data so polling is required several times every second to get a good user experience. In turn the remote also has controls for the train such as speed setpoint, horn, and lights. You can look at the currently implemented version in this facebook album https://www.facebook.com/pg/LSFornells/photos/?tab=album&album_id=614575305650878

The system can go to sleep mode and implement a longer polling period, or to power down the radio completelly when the train is stopped, but not while it's running. Also, for security reasons the train will immediately stop when there's loss of communication with the remote, so the remote must communicate all the time with the train while it is running.

Range should be around 5 to 10 metres, but not more. More range is dangerous because the driver must have sight of the train at all times.

The remote version except the battery management hardware and software is already implemented and working fine on a breadboard using NRF24 modules. The radio is set to the lowest possible range (and power)

I think this describes the essentials of the project and why I believe the long range version is not suitable for this project.

I'm asking for a way to put a small antenna attached to the remote, but t's not to increment the range but to actually have range while still keeping the lowest possible setting.

I understand the need for the system you describe.

If it was my project I would just use a plastic case. I built some like this for model trains

There are non-PA-LNA SMA versions of the NRF24L01 available.

Robin2: I understand the need for the system you describe.

If it was my project I would just use a plastic case. I built some like this for model trains

Please can you give me some reference or pointer on where I can fin a case like that. It certainly looks very convenient for this application!

Whandall: There are non-PA-LNA SMA versions of the NRF24L01 available.

I sort of recalled having seen it long ago but for some reason I wasn't able to find it again. The orientation of the antenna connector does not totally suit me, but it's good to know where to purchase it and certainly something to consider. joanlluch: Please can you give me some reference or pointer on where I can fin a case like that. It certainly looks very convenient for this application!

I think they are widely available from other suppliers, including Ebay.

Thank you all for your input and suggestions.

Now I think I have everything that I need.