I am trying to follow the details at http://arduino-info.wikispaces.com/Nrf24L01-2.4GHz-HowTo

I have wired up my Arduino according to the link above.

I am using the RF24 Library from https://github.com/maniacbug/RF24/archives/master

I am trying the getting started sketch

It has this in the sketch

well pin 10 is not even connected?

PIN9 is connected to CSN

Has anyone got this working? I am new to SPI and generally everything.

*** PRESS 'T' to begin transmitting to the other node

There is nothing at the other end as I don't have the 2nd unit runing at all!

OK I have found that the constructor specifies the CE and CS pins - I take it CSN is CS?

Here is the constructor

Creates a new instance of this driver. Before using, you create an instance and send in the unique pins that this chip is connected to.

The pin attached to Chip Enable on the RF module

The pin attached to Chip Select

I have changed the constructor to

According to this image the pin numbers are the same.
I don't have this hardware and the datasheet does not download but a quick look at the links you supply and I agree the sketch looks like it should read RF24 radio(8, 9); assuming your using an UNO.
Have you also tried changing the wires so CE is pin 9 and CS is pin 10 to match the sketch? A look at the ATMega datasheet shows pin 10 as SPI slave select pin so may need connecting to CS to determine if SPI mode is master (transmit) or slave (receive)

Thanks for your reply as it may have put me on the right track.

On an Arduino Duemilanove

Also on the docs for Arduino Mega 2560 it says "The SPI pins are also broken out on the ICSP header, which is physically compatible with the Uno, Duemilanove and Diecimila." 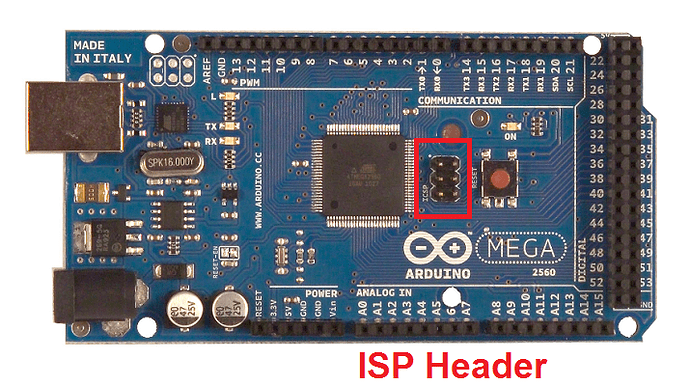 I am about to go change my pins and test...

OK I think I am better now but still not successfully transmitting/receiving.

The error I get is timeout when sending a packet.

Now I am unsure about the radio pipe addresses

Are these some sort of hardware device id? or are they just created as random numbers?

If they are hardware ids then they look like the RX_ADDR_P0-1 from the screen snap above but the numbers are different in this case.

I tried using those numbers in this area but I still got the same timeout message!

I decided to try to run a different sketch - in this case another example - I think it was pingpong?

This worked for me.

No idea why the "getting started" sketch did not but I will try to see over the weekend - work calls now!

I seem to have the same problem with the pingpair sketch.

Got a bad connection, but guessing that you didn't get much help?