I have multi device with nrf24l01, but I have a transmission problem between some devices.

Normally the NRF24L01 PA LNA at a long range

Have you idea ?
You could see my module on this blog ( http://domotique-diy.over-blog.com/ )

Obviously, node 31 needs more signal strength.... replace it with a model that also has the power amp and low noise amp (and an external antenna).

How many nRF24s have you in the network?

Please post a diagram to illustrate how they are positioned relative to each other.

Please confirm that everything works properly when the distances are shorter.

Have you tried using a different channel in case the problem is interference from some other device?

Have you tried moving the nodes around to avoid RF dead spots?

high speed low power 2.4GHz devices with small antenna do not have a long range, especially
as they have to compete with the 2.4GHz leakage from microwave ovens and WiFi spread-spectrum
signals.

I have make many test on different position for Node 31.
When the distance is short no problem.
You can see on this picture the distance ( in meter )who I have the probleme with node 31.
Communication between N0 and N1 no problem.
N1 and N0 are on 1st floor, N31 is on ground floor
N1 is NRF24L01+pa+LNA 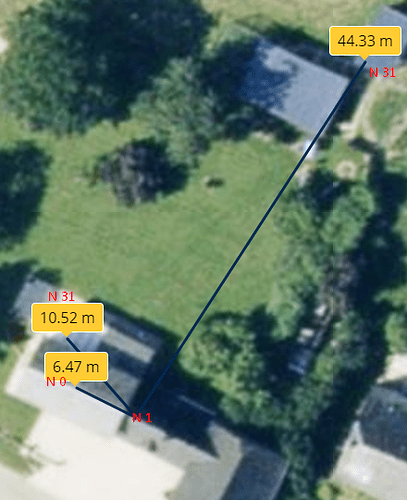 @123Splat, I can't replace the nRF24 of node 31, because the nRF24 is solder on the PCB and it's specific for the size of the box containing.

Yes if I moved the nRF24 around the RF dead spots, it's ok but I can't add new node between.

If I update the antenna of node 1 like a 8db or 12 db, do you think this can solve the problem ?

Thank you for the very clear diagram.

Have you tried moving the high-power nRF24 to Node31 - i.e. the distant one?

I have had a pair of low power nRF24s (with PCB antenna) working at 110m distance outdoors in straight line of sight.

You have not said whether you have tried different channels?

Your Node31 seems to be partially shielded by the building in front of it. Can you raise it above the level of that building?

antennas with gain are directional, so it'll require some experimentation to get the best alignment.

No I haven't change the channels.

alb12:
No I haven't change the channels.

It's well worth trying

Why ever not? Isn't it as simple as plugging out the nRF24s and plugging them in somewhere else?

Yes I wll try to change the channels, I use the tmrh20 library and I haven't specify channel for the moment.
Reason:

Why ever not? Isn't it as simple as plugging out the nRF24s and plugging them in somewhere else?

There is no such thing as an omnidirectional antenna with gain, that's a collinear array. It beams out sideways.

So if I change my antenna 2db by antenna omnidirectional 8 or 12 db, the problem will be same ?

alb12:
Yes I wll try to change the channels, I use the tmrh20 library and I haven't specify channel for the moment.
Reason:

Note
Use radio.setChannel() to configure the radio channel

Maybe it would be wise to invest in another high-power nRF24 - or invest in a desoldering pump.

I don't understand. I thought you said you cannot change the nRF24.

And I always get my decibels mixed up - is 8 more or less powerful than 2?

There is no such thing as an omnidirectional antenna with gain. Its a beaming antenna so you
must point it right for best signal.

Yes for the node 31, but if I change the antenna of node 1 ( See my Schema ).
Normally 8db is more powerful than 2db

Sorry. I feel I am being really dumb here. I thought you said earlier that Node1 is the node with the high-power Arduino?