Outline to control an air pump with arduino

I am new to the microcontroller/electronics world but have a rather concrete project in my mind and need your help to get started. I hope I have got the technical terms almost right and please just ask if something is unclear.

Here is a quick intro of my project:
I will have a microcontroller which is able to read values from a pressure sensor and to open/close valves. I want to check the pressure in some interval and if it drops below a specific threshold the microcontroller should activate the pump.

So, now please jump onto my train of thoughts around the electronics needed for this project:
As microcontroller I have got two board options, namely Pneuduino (http://pneuduino.org/) or Programmable Air (https://www.programmableair.com/). Pneuduino registers as Arduino Micro and Programmable Air has an Arduino Nano on top of it. From my point of view, it does not matter that much which of the two boards I am using, the interesting part is the next step.
However, if some details are missing which I did not provided maybe they can be found at their github repos (Pneuduino: GitHub - oujifei/pneuduino: pneuduino lib, Programmable-Air: GitHub - Programmable-Air/PCB: Electronics for Programmable-Air or an older version GitHub - tinkrmind/programmable-air: A hardware kit to experiment with inflatable and vacuum based soft robotics.).
Note that I won’t use the pumps on the Programmable Air as they are not sufficient.

The next step now will be to control the linear diaphragm pump AirMac DB5 (https://www.airmac.com.tw/en/model/db5/). I want to have the microcontroller and the pump in the same circuit with only one power source. As mentioned before the microcontroller should measure the pressure and also activate the pump if the pressure dropped below a specific threshold, so I guess the microcontroller should control a switch which then gives power to the pump? Based on this assumption I have used the Common ground circuit example from the forum and modified it a bit. I am aware that this circuit is not technically correct, but I hope you will get the idea of my project. 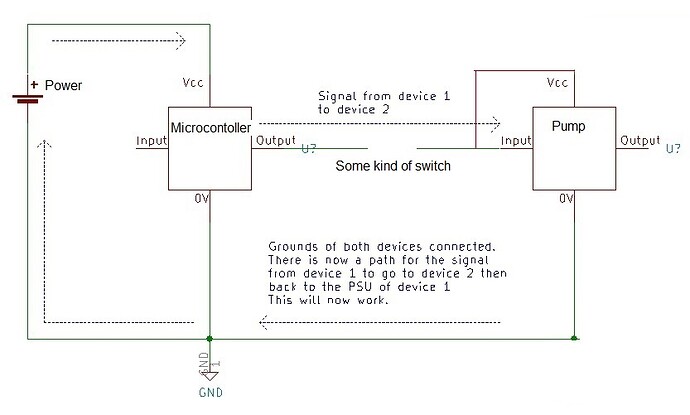 As far as I understand the situation, I need a common ground for the main board and the pump. For this project my power source would be 12V DC (I guess?), in order to be able to run the microcontroller and the pump. Furthermore, an important aspect is that I would need 1.05 A at the pump so that it works in a proper manner, that means that it can pump around 8 litre per minute.

What do I now expect from this post?
I hope someone can give me a basic outline at which elements I should look and how my circuit could look like. As stated in the beginning, I have basically no idea from electronics and don’t know which aspects I should be aware of. Especially, which switch I could use (if this even is a valid solution).

Sounds sort of like a like a school project proposal. What problems do you have so far as to getting started?

zoomkat:
Sounds sort of like a like a school project proposal. What problems do you have so far as to getting started?

Indeed it is a project for my university.
As for now, I have received the pump and I am able to get an arduino. Currently, I am searching the internet for some ideas. For example I think this may be of help for me: https://www.arduino.cc/en/Tutorial/TransistorMotorControl, because my pump is basically a motor which I want to control.
As you can imagine, for me this would like a suitable approach for my project but it could be also totally wrong. Therefore, I would need a little help to find the right direction.