I got few of those Pan and Tilt Brackets with 2 mini servos and they are currently being auctioned on eBay. Check it here

Full spec is in the ad.

These brackets are really phenomenal for robotic projects. Use them to make your sensors scan around or mount a video camera on them.

How much would shipping be to Denmark?

bld, I've posted your Pan & Tilt brackets this morning. Hopefully you'll get them before weekend.

I would like to ask, do you ship to Norway and how much will be postage? As well, what is the size of the front bracket's plate?

Received it, but got some issues with the servo motors...

My arduino simply stops running after a few seconds with them connected.

I tried with some bigger digital servo motors, and no problems with them, also tried one a bit smaller and then one smaller than the ones from the bracket. All of them works fine... but as soon as i connect any of the servos from the bracket, it simply stops running...

but as soon as i connect any of the servos from the bracket, it simply stops running...

It's not just the size of a servo that determines its current requirement but to a bigger degree how much mechanical load is being placed on the gear train of the servo. It is never a good idea to power a servo directly from the Arduino +5vdc pin, but rather use an external source of +5vdc rated at least one amp per servo.

No load, got external power.

This is a mystery, all my other servo's are working like they should, except these two...

Update! Got it working, no idea what was wrong before... Disconnected everything, let it wait for a few minutes, then tried again.

Sorry for the late response, I didn't notice the messages.

I am glad that problem sorted itself. I am running the very same brackets & servos in my own projects and they work quite fine. I think these servos have quite a long travel, more than 180 degrees. Somewhere between 190 and 200 deg. I am using an external power source as well, on 5.0 VDC, although it seems that they use max 40mA, unloaded.

It came to my attention that some people are having problems putting together servo brackets and that they are coming out misaligned. Please refer to those two pictures, in order to see how to put brackets together and avoid the misalignment: 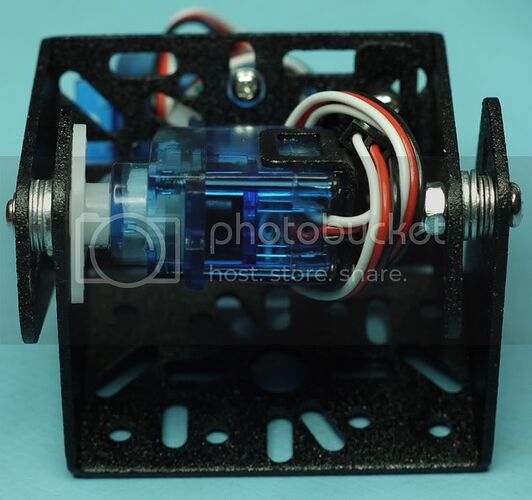 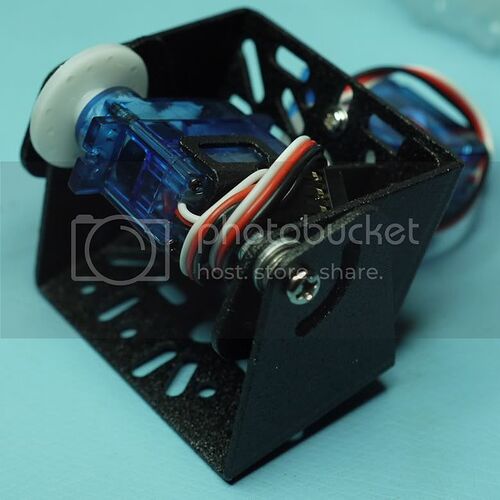 There is a new link for brackets as well:

When assembling... be sure you know what point in the servo's range of motion it is currently sitting at. I.e. has the little post rotated full clockwise? Counter clockwise? In between?

yeah, you are right. One has to set servo exactly in the middle, before inserting it into the bracket. Any mid point estimate just by eyeballing it would be erroneous. The best way is to set servos to the mid point, electronically from Arduino.