Here's a little something I've knocked out in the last week. It's a clone of the 1981 classic Nintendo Game & Watch handheld title "Parachute". It's using the TVout lib, and I'm running on the Hackvision hardware, and I also have it running on my own breadboard variant. I do like the Hackvision though! I did make a few SW tweaks and have fed that back to Michael @nootropic. 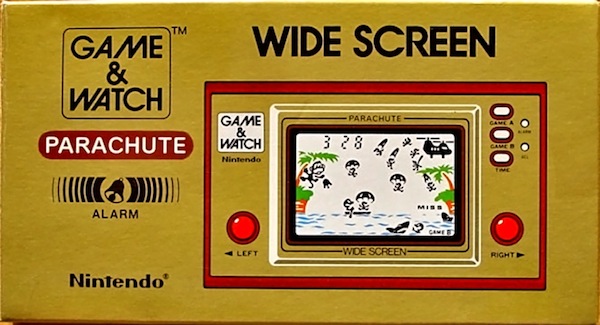 To anyone who's unfamiliar with the original G&W games they used an LCD with each animation frame as a defined graphic in the LCD. So animation is done by flipping cells on then off in a controlled manner. My code emulates that - and I feel it's pretty close to the real thing.

The hardest part is getting decent looking graphics at 128x96 resolution! :) Pixel by pixel tweaking is required - I'm no artist so the bitmaps took almost as long as the code!

Apologies for the video quality - the game looks much nicer in real-life! It was late and I was using my iPhone4 in my right hand to record the video whilst I played the game with my left hand.

Once it's complete I'll post the code somewhere. Need to store hiscores in EEPROM and finish the sounds (beep beepity beep!)

Those where addictive, plain and simple challenge. 8)

Nice one! It really looks like those crappy old games (I hated them myself).

karlboll: It really looks like those crappy old games (I hated them myself).

I am curious about how the screens are being rendered. Are their several bitmaps on top of each other?

I had a game like that when I was a kid where you were Peter Pan and you landed on Hook's ship, fought your way through a bunch of pirates and then at the end fought Hook to save Wendy. I played that thing so much I burned through enough batteries that my Mom sold it in a garage sale while I was at swim lessons. Had one perfect score on it that I could never duplicate and I still let my Mom know about how much I loved that game... maybe more than life itself. Maybe I need to remake that one.

I am curious about how the screens are being rendered. Are their several bitmaps on top of each other?

Not quite. I keep an array for each slot in the sky - each can essentially have one of 2 values (empty or occupied) - although there is a special case for saved paratroopers. There are 3 logical columns and each column is cycled through in turn. All of the bitmaps for each slot are pre-defined, and then simply displayed (or not) depending on the state of the sky array.

I've finished the code now so will post it soon - it's pretty basic stuff.

@Schmidtn - I'm sitting here at my parents right now - in front of me I have Donkey Kong (dual screen), Parachute, Fire, Popeye and Turtle Bridge. I think Fire might be next. These games formed a special part of my childhood too, so breathing new life to them is both fun and emotionally fulfilling. I also have a Galaxy Invader 1000 console that still works - it might make a nice clone as well.

I need to get a few more Hackvisions!

pocketscience sent me the Parachute code and I added it to the Hackvision games page along with a new video. Fun game!

Thanks for posting that Michael - your vid is far better quality than mine!