Im trying to make piezo working with arduino to read very little vibrations.
Piezo can detect these vibrations but changes in voltage are very small (0.1- 0.8 mV). So I tried to connect it with op amp and dc voltage bias to be able to detect it on arduino. That is my schematics:
schematics

I would like to amplify those .x milivolts by 1000 times to have reasonable reading on arduino. I have encountered many problems with that and spent hours trying different configurations with op amp and everytime I try I have different results. So here's what I was doing and what i measured:

2)I did the same but with 100kOhm as Rf resistor and again everything was fine.

3)I did the same but with 1MOhm as Rf resistor and I started to have problems. I had constant 2.3 V output and sensitivity was really same as with 100kOhm resistor.

I tried many times more and I always have different results. Like there is constant 0.9 V output and I unplug und plug battery again voltage changes to 2.5V.

Everytime I checked if the circuit is all right, if there's undesired resistors contact and etc.

What may be a reason of such random behaviour?
Why amplifying doesn't change when I change resistor sometimes?
Also is amplifying by 1000x possible? 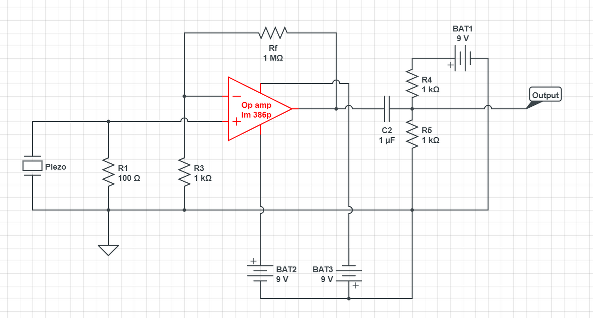 -The output circuit is wrong, and will subject the Arduino input to damaging overvoltage.
-R1 should be much larger.
-The LM386 is not an operational amplifier. It is an audio amplifier. Use a decent op amp.
-There are no decoupling capacitors on the power connections. 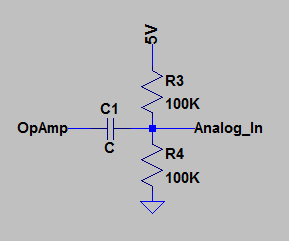 Thank You for reply.

So I did:
-put 1MOhm resistor instead of 100 Ohm.
-put decoupling capacitor as you said.

About op amp I'm sorry but I have normal op amp which is lm358p. Number is worn down and I misread it. Sorry.

Lastly I know output voltages are to high and will destroy arduino, but I read voltage with multimeter for now so I didn't made it properly but to check if it works.

Hi,
Try lowering the value of the 1uF decoupling capacitor.
Try 0.1uF or 0.47uF to see if the offset is lower.

Also some 0.1uF caps from +9v to gnd and -9v to ground on your opamp supply batteries.

What is the application, what frequency are you trying to detect vibrations?

Lastly I know output voltages are to high and will destroy arduino, but I read voltage with multimeter for now so I didn't made it properly but to check if it works.

Is the vibration fairly-constant? A multimeter won't accurately read short-term "spikes". You might get something like an average but multimeters are made to read constant (or slowly-changing) AC sine waves or DC. For example, a multimeter is bad for reading regular audio (voice or music).

The Arduino is even trickier... It "samples" the voltage at one instant in time (usually in a loop). That makes a constant AC voltage "look random", except higher voltages will have a wider range of voltages. It also means that you can miss a short impulse (like if you are using a piezo to detect a drum-hit).

Typically you can find the peaks (but remember you won't sample every peak), or you can calculate RMS, or take an average of the absolute values or an average of the positive-readings (after subtracting the bias). (The average of an AC waveform is zero so the true-average isn't helpful.)

Even with high pressure put on piezo voltage barely changes as if it wasn't amplyfiyng.

[u]Over-voltage protection circuits[/u] If your op-amp has positive & negative supplies, you should protect against any voltage above +5V and ANY negative voltages. (Increase the current limiting resistor to between 1K and 10K.)

What are you detecting.
A simple 1" piezo disk with 1Megohm resistor across, directly connected to an analogue pin, with 1.1voltAref enabled in code, is very very sensitive and can detect a pin dropped on a desk.
You might not need that opamp. Just the right code.
Leo..