I’ve started building a mowing robot (wifi controlled with cam) so that I can mow from my couch.

Turning an old craigslist wheelchair into my robot slave...

I’m currently powering this thing off the 12V batteries from the wheelchair, through a power supply i custom built… only, the power supply runs way too hot.

I’m considering hooking up an inverter to the batteries and just using that. Anyone else run their arduino (+router +wifi cam) off an inverter from a 12V battery?

What other methods of remote power do you use?

Anyone ever replace the 12V batteries from a set of wheelchair motors with a Life4PO battery (with much greater power)?

only, the power supply runs way too hot.

Which suggests a very inefficient power chain. Care to share?

Sure, so basically, I'm taking 12V from the car battery, and trying to split it into 3 5V outputs.

I'm using the 7805 chip to regulate the power to 5V, which seems to be working, as when I measure the power coming out its 5V. 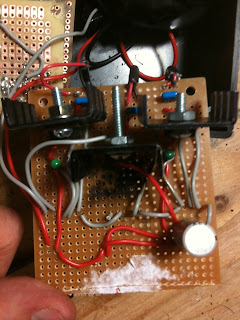 I have a couple capicitors between, as suggested in this diagram:

If I only plug in power to the router and/or foscam camera to this, it works great (Just gets hot).

Now the tricky part... So, when I go to plug in the arduino, which is connected to the wheelchair joystick I hacked into, my ground wire between arduino and the joystick BURNS UP. Literally... melts, fire, etc...

So, obviouslly, I have a short or something in the system right? I mean, is there any real problem with steeling power from a 12V battery that is powering a joystick for a wheelchair, to power an arduino, that also is connected to the josytick?

What currents are your loads? 12V to 5V regulation will dissipate 7V times the amps passing through - those small heatsinks are good for 2W at most, forced ventilation will help a lot.

A switching-mode DC-DC converter would improve the effciency from 40% to 80 or 90%, note.

Yeah, I knew heatsinks were going to be an issue... thats the problem with buying a case before the power supply is done. (The case is pretty small and I was determined to make it fit.

I'm thinking of scrapping my attempt to build my own Power Supply, and in its place, use an inverter: http://www.amazon.com/gp/product/B001RNOHBC

Not the most elegant of solutions, but I suspect it'll be much safter.

I'm thinking of scrapping my attempt to build my own Power Supply, and in its place, use an inverter

What are you going to do with the AC output of the inverter? Not directly power the motors and Arduino, that's for sure.

A UBEC like below is a better voltage reducing power supply.

The intention of the inverter is to simply draw power to run the camera, router and arduino.

The wheelchair motors are actually powered by 2 12V batteries in series. The power for this (and the wheelchair joystick) will bypass the inverter, so hopefully I’ll be ok.

The intention of the inverter is to simply draw power to run the camera, router and arduino.

Draw power from? The batteries presumably, since the purpose of the inverter is to convert DC to AC, and the batteries are the only source of DC.

Does the camera need AC? I doubt it. The router? Possibly, through a wall-wart. The Arduino certainly does not, unless, again, a wall-wart is involved.

An expensive inverter to convert DC to AC and a gaggle of wall-warts to convert the AC back to DC seems a lot more inefficient, expensive, and heavy than just getting something better than a 7805.

Although not very efficient you could get a 9volt regulator and convert your 12volt to 9volts.Then, use your 5volt regulator to go from 9 to 5 volts. The advantage would be that you will spread out you heat across 2 separate regulators and it is cheap.

You would set your 9 volt regulator up the same way as your diagram.