probably fried Uno, green LED on, but chips hot and "programmer not responding"

After several days of better and better results running step motors (yes, my egg plotter actually did plot eggs!), I seem to have had an unlucky event with (my own) motor shield's diodes and external 24 volts when

After unplugging everything, the UNO still has the green light on, also the pin 13 LED sort of dim, the small square IC seems to get hot and the large IC does get quite hot, especially on the notch side (east side in the usual pictures of an Uno). I tried a couple times to reconnect stuff, with no success. I tried to connect, I get "programmer not responding" error. Ubuntu's dmesg doesn't seem to see it any more, though I am unsure on that one, since I do not know quite what to look for.

What I would appreciate are ideas an opinions on testing what else is gone, and/or if anything is salvageable in this unit.

Reading the forums it appears I might be good just by replacing the large IC, but that there is a risk that whatever damage exists might fry the new one also. Is there a way to know?
I also learned here that Fry's has their own brand of duinos, a few dollars more expensive than Amazon, but then a fast way to get back to painting eggs...

If either of the ATmegas are hot to the touch, they are probably no longer good.

Try taking the ATmega328 (big chip) out of the board. See if Linux can see it when it is attached. If not, the 8u2 is probably bad meaning a difficult repair. If, however, the board is communicating with the PC then you might be able to get away with just a new ATmega328...

While there is a protection device on the Uno, it is amazing how often the more expensive chips die to save the cheap one.

All the more reason to go modular in development projects!
Go with FTDI basic for programming, promini for the project, ardweeny, RBBB, standalone build for the embedded part.
Something dies, can pare costs back to most likely just replacing the 328 chip.

I think many would benefit from a DIP USB-less board with headers as one option for connecting wires into the final design.

I thought I gave the eagle files for this to someone a while back - wonder what became of that?
Wouldn't be hard to rearrange to fit 50cm x 50cm for iteadstudio's 10 PCBs for $10 deal.
[Edit] as shown below, all thruhole, and autoroutes nicely just needs a little cleanup to get rid of a few vias. 36mm x 50mm 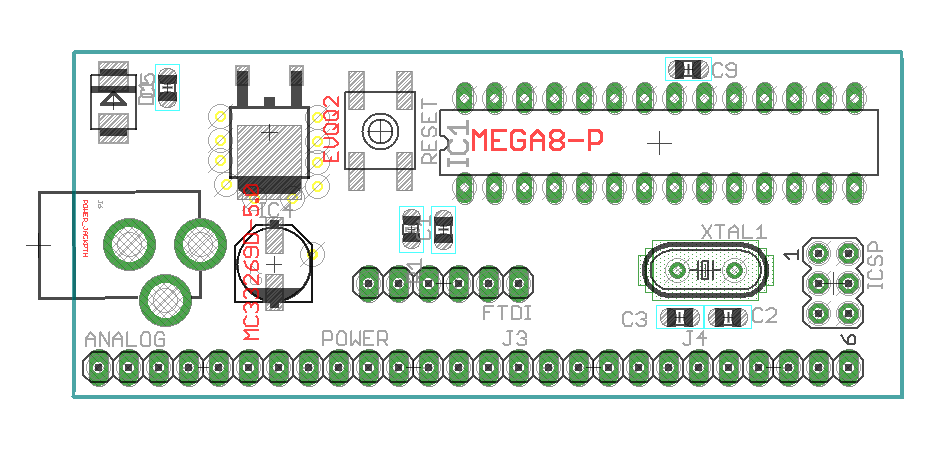 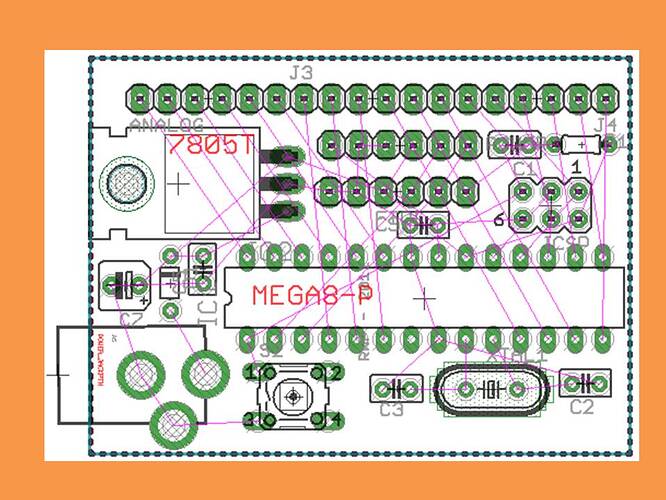 CrossRoads, I was the one you gave the files to. I was trying to find a way to build a "special purpose" board and I needed easy access to the pins which your board design is excellent for. I later went with the Arduino Fio design as a base because of it's small size. I have not completed this board as of yet but, I have been working on it.

I do like the Sideduino, you did a nice job on that design!

Thanks cyclegadget.
I was thinking last night this is awfully like the this board that nkcelectronics sells too, just with the analog connectors arranged differently.

I guess mine is an improvement - little smaller (no mounting holes), has the FTDI pins as a group, and has crystal vs resonator.