I'm trying to make this 3 work together:

I use Arduino IDE 1.8.5 to upload an example under File, Examples, TFT_HX8357_Due, TFT_Meter_4. The file uploads without error message but I'm not getting anything on screen except a white light. This is the same on all the examples I have tried.

I've check the DUE by uploading the basic example 'Blink' and it works. So, the board is fine. The screen has display on it (white light), so I believed it is a good display. The TFT shield powers the screen, so I think it is also good.

I started doing this not too long ago so I'm totally new to this stuff. I hope my explanation is good enough.

Thanks for the help... 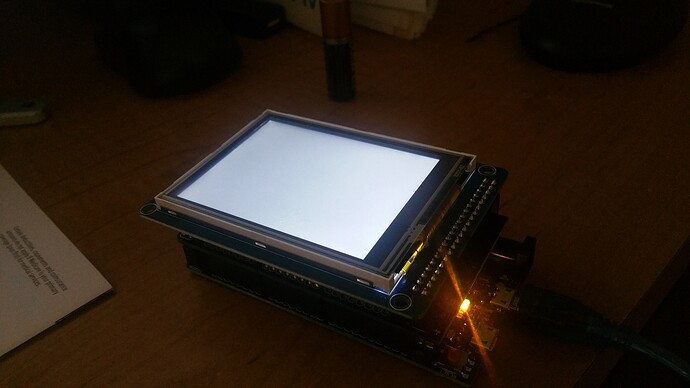 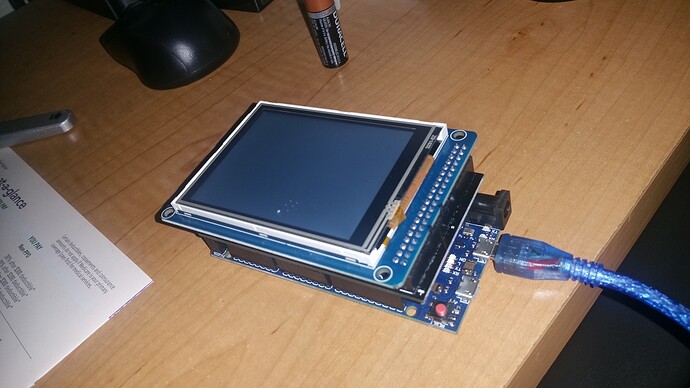 I've check the DUE by uploading the basic example 'Blink' and it works. So, the board is fine.

Or the DUE could just be faulty, the blink sketch does not and cannot check that each and every pin on the DUE is fully working. The pins needed to drive the display may not be connected, have bad solder joints etc.

The screen has display on it (white light), so I believed it is a good display.

Same as above really, it might go white, but that does not mean it will always accept commands from the Arduino .

The TFT shield powers the screen, so I think it is also good.

Or the shield is faulty (see above) in that there is problems with the wiring for the control signals needed to control the display.

The problem with trying to get 3 things to work together, and they do not, is that its very difficult to work out from the outside which of the 3 bits is the problem.

I would start by trying another of the same type of display, but from a different source, its unlikely the same specific fault exists on two seperate displays.

While I'm not a fan of the library, have you tried UTFT which supports the hardware combination you have? You've got to start with software that is known to work with your hardware...

Thanks for the input guys. I've test each one to isolate the problem as per srnet and discovered the screen is defective. To avr_fred, I don't know how I came up using HX8357/ILI9481 :-). Anyway, thanks again for the quick response.