Finally I received my Atmega168V-10PU from Atmel. I want to use them to the university project as they can work at low voltage.
I'm having big troubles trying to program it using my Arduino Uno. I've been searching on the net for a good tutorial to directly program or maybe initialy bootloader this kind of micro but all seems to not work with this micro. 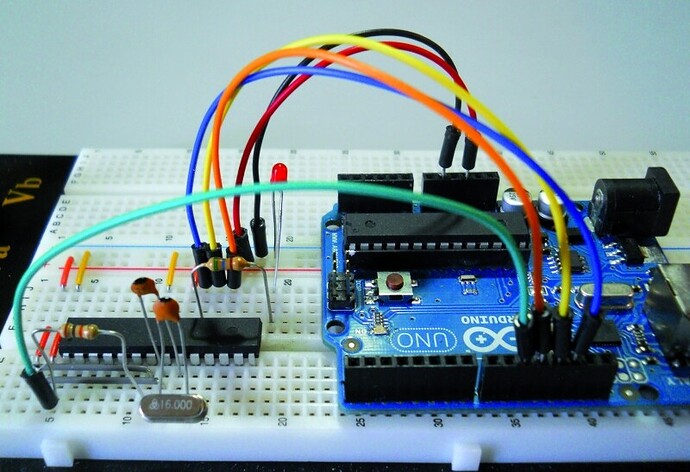 We use an Arduino to program other ATmega without bootloader . This technique allows you to use all flash memory for code and make boards using new ATmega, cheaper than those with bootloader. The qualities that have made the success of Arduino... I am not an expert on microcontrolers and many thinks are difficult for me to get.

I want to use these atmega168V-10pu in stand-alone circuits, so I thought bootloading them would be necessary but in some forums people say that as they leave the factory with the fuse set with the internal clock, and I want to use an external oscilator, I should bootloader them. No idea....
Another doubt is what board I have to use to program it if I'm using Arduino UNO in ISP mode?

So far, creating my own boards (as explained in the tutorial above) and following the normal process explained everywhere I get:

Checking the avrdude file I see the signature is ok... I don't understand why I keep getting this messages.

Does anybody of you have ever done something like what I'm trying to do? what is the process (as detailed as possible please) that I have to follow to succeed?

By the way, in my circuit, I haven't put any external oscilator so far as initialy it would be great to just program the micros with the blink program using the internal clock.

What does the line above that say? (the one with the signature)

The 168V should be burnable using exactly the same procedure as a normal 168. Even the device signature is the same.

Turn on "verbose" for your attempt, so you can see what signature is actually being reported.