ProtoShield using "Household" Items for < $5US

I just posted an Instructable detailing how to make a ProtoShield that accesses all the pins (yes, even the offset ones) using stuff that's cheap and widely available. have fun making tons of cheap shields for all your projects!

This turns out better than I would have expected, I like the way you pot the soldering job in epoxy. However, have you taken an ohm-meter to your connections? I was under the impression that the J-B Weld product mixes metal in with the epoxy to increase the strength. The company does not list electrical properties on the J-B Kwik product information page. http://www.jbweld.net/products/jbkwik.php The plain J-B Weld info page says to "use it as an electrical insulator," so maybe my impressions were wrong.

I did a basic continuity test after everything was done, but that was more to test that I hadn't botched the soldering job. (I really should have done that BEFORE epoxying, but oh well, at least now I can answer your question)

if there's any leakage it's minimal. I'm with you that that could definitely impact things, especially on the analogread side. if I get reports back that there's problems of this nature I'll find a more electrically inert epoxy (even regular glue might do,) and update the instructable accordingly.

I think the idea to be able to utilize standard 0.1" spacing perf board for homebrewed shields is a good one, but the implementation leaves a little to be desired.

There is no good reason to use wire and epoxy for all four header connectors, just use the wire/glue on the one non-aligned connector. Use the following to connect the other three headers:

Doesn't that make a lot more sense and less mess to deal with ;)

yeah, someone posted something similar on the instuctables site. that approch makes sense to me. go for it.

just for reference, I'll paste my instructables reply to "why not just use male headers?"

you do make a good point though. in one of my earlier attempts I used a flipped board, male connectors where they'd work, and wire for the 8 pins where they wouldn't. that definitely sped things up, but I figured I was already using the wire, why not go all the way."

I didn't mean to imply that your way was wrong, just that a lot of labor and time might be saved using premade strip headers.

And anyone using an Arduino should buy a lot of strip headers for hooking up connectors, sensors, etc as just sticking round wires into the Arduino hearders does not make a very mechanically strong connection. Just a suggestion.

Oh, by the way I should caution that using strip headers on SINGLED-SIDED perf-board can be somewhat unreliable over time unless they too have some epoxy glue support added.

Inserting and uninserting the board repeatably from the Arduino will eventually loosen the bonding between the solder pads and the perf-board causing the connecting PCB strip to flex and possibly break. After having seen that on one I build to plug into a solderless breadoard, I now try only to use perf-board stock that uses plated through holes. It does cost more and harder to source, but I would rather build it only once. ;)

I make my shields with plated through boards and use male headers. The only pins on the shield are the ones used. Male headers are quite inexpensive when purchased in quantity. I just tried a board with epoxy on the bottom (epoxy from Harbor Freight less than $1 USD). I have not found any difference from the epoxy free boards, yet. Scoping adjacent pins showed no leakage.

I give Lefty the credit for getting my wheels turning...

no more epoxy. it's gone. I came up with a much better method (a whole day after posting the other one! not embarrassing at all). instead of using male headers and wire, how about using ALL male headers. just modify one of them to handle the offset.

Yeah, bending the header pins works as "well" as such a work-around can expect to--and definitely relatively straight-forward to do.

In my experience, at least.

or you can buy this shield (http://www.nkcelectronics.com/freeduino-protoboard-breakout-shield-arduino-compatible.html)and have a protoboard/perfboard compatible Arduino / Freeduino.

@nkcelectronics: Do you have better shots of that shield?

I don't really get the bend both ends and melt it. I'm thinking it would be better to bend each pin out a bit and then back down a short distance away.

that's an interesting thought. I'm kind of embarrassed that I never even considered it. you could even hold the pin with a pair of needlenose and do both bends at once, with kind of a move-to-the-side while pushing in.

I think I'm going to stick with my method for one reason though. it looks fantastic. with the bend hidden within the plastic it looks exactly like a regular header when installed. I've shown people the board from the instructable; inserting and removing it. the reaction is pretty consistent: "yeah, ok, so what?... hey wait! how did you do that?!" followed by 30 seconds of inspection before they figure it out.

at any rate, from an ease-of-implementation standpoint I think you've got me beat. I'd be interested to know how it works for you!

Okay...I bent a header the way I described, it fits perfectly...but when I went to solder it I realized I'd have to solder on the component side, which I can't do on cheap single-sided proto board.

Looking at your instructable, the pins are on the "wrong" side because I'll have to mount all my components to the solder-side and, again, I won't have any pads to solder to.

If I buy a high-quality double-sides plated through perf board, I may as well buy some of ladyada's protoshields. It would be about the same price.

that is a fantastic point. I've come up with a solution and tested it. no time for pictures. will follow up later today or tomorrow with an update to the instructable.

here's the basics: -locate the 8 holes that will be occupied by the header -cover them with solder -use your iron to re-open the holes, resulting in 8 holes rimmed with solder -put the header in place -for each of the 8 holes, touch the board as close as possible to the header. the solder rim will melt around the pin, making the desired bond

Will those solder joints then be mechanically strong enough to stand up to shield removal and reinsertions over time? Could make for nasty intermitten problems.

Will those solder joints then be mechanically strong enough to stand up to shield removal and reinsertions over time?

I think so. since you have control over how much solder is in the initial puddle, you can use as much as you normally would. this puts the header a little farther away from the board, but you would presumably be doing this with all the other headers as well.

since I only tried it this afternoon, I can't empirically verify the life span ;)

I think so. since you have control over how much solder is in the initial puddle, you can use as much as you normally would. this puts the header a little farther away from the board, but you would presumably be doing this with all the other headers as well.

They'll be cold solder joints for sure, and it will be very hard to get enough solder on the ring to make a mechanically strong joint especially since you don't want the hole filled.

And how will you get heat transfer from the pin to the solder on the ring? Once you've got a few rings making the mechanical connection, you won't even know for sure if the others actually melted.

Though I haven't actually tried soldering it this way.

Maybe I should try not having it completely flush and see if I can get in with a fine iron tip.

it's not an ideal solution to be sure. just to clarify, in the method I described the soldering iron never touches the pin. rather, you heat the conductor on the PC board which melts the solder. maybe you could also tin the header pins prior to insertion to get a better connection.

Update: the instructable (http://www.instructables.com/id/Embarassingly_Easy_Arduino_ProtoShield/) has been changed. key pictures:

The approach I use in this situation is to push the pins so that they are flush against the plastic piece of the header. Then push the header through the board from the opposite side, so the plastic is on the non-copper side of the board and the pins are long enough to be useful and still be soldered.

Here is a couple of pictures with some 2-pin headers from my Arduino AVRUSB shield: 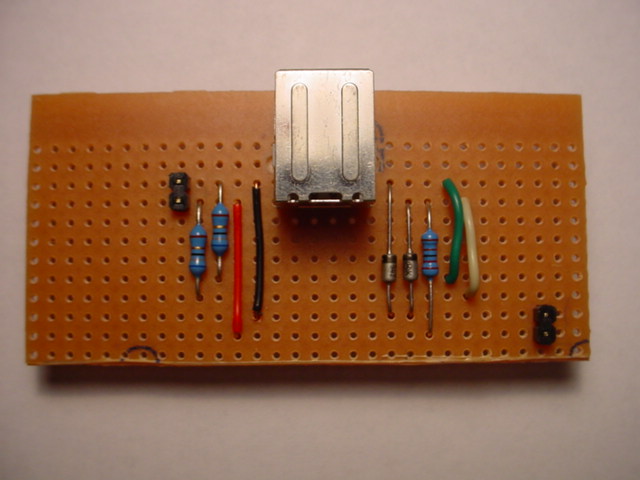 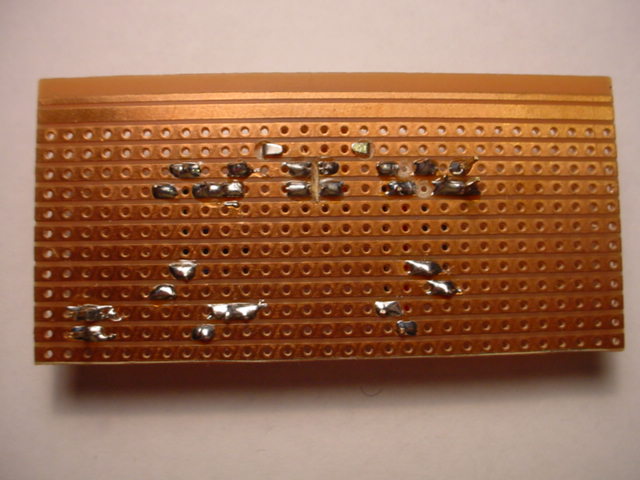 I learned the trick from some blog somewhere as I recall. :-)