I'm slowed down again in my project due to a problem, for my robot I brought an Arduino Uno and a servo shield to make the build a bit simple. 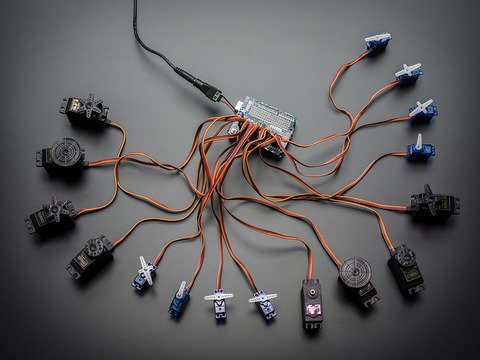 You want to make a cool Arduino robot, maybe a hexapod walker, or maybe just a piece of art with a lot of moving parts. Or maybe you want to drive a lot of LEDs with precise PWM output. Then ...

I tried for days using the example in the Servo lib to get my servos to swing:

But later I realised I need to use the specific library for the shield, as its I2C: This is the code I was meant to use to put servos in the correct position:

This is the main code for the robot: (the character count goes over the limit so I'll leave am link to it, sorry for causing inconvenience)

If anyone could help me by taking time to modify the following files(original code) to solve my problems I will be very grateful, or just help me in general.

Thanks everyone, very desperate for answers and help, my robot is due very soon for assessment, please help (>.<)/

I will also leave my email here if anyone wants to contact me that way.

P.S:
->I just realised that the code is in PWM and I need to transform the code into I2C (:< how do I do it)
->The servos are not faulty, they work (I am using SG90 servos)
->If this helps, here is the instructables link: http://www.instructables.com/id/DIY-Spider-RobotQuad-robot-Quadruped/?ALLSTEPS

Please read the first post in any forum entitled how to use this forum.
http://forum.arduino.cc/index.php/topic,148850.0.html then look down to item #7 about how to post your code.
It will be formatted in a scrolling window that makes it easier to read.