pwm output current to low for my project

i'm working on a project to control the fanspeed of multiple artic P8 PWM fans acording to our central heating, i just tested my code with one fan and it works just fine but i'm pretty sure that my arduino uno wont be able to suply enough pwm current to control all 20 fans
any sugestions how to handel it ?

Arduinos themselves are not designed for such applications directly.

MOSFET control for PWM output can often solve those issues but may involve a seperate PSU to handle all the current required by the fans. 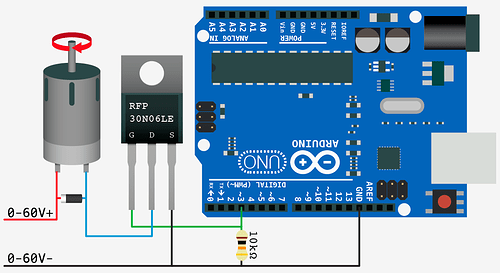 Although much smaller in scale this project may be of interest and uses the same electronic approach.

okay maybe some more details ...
my plan was to use an arduino uno to control those 4wire artic F8pwm fans by temperature so if my tempsesor (DS1820) mesures temps under 27°C arduino should power a relay so the fans get no voltage what so ever, when 27° is reached the arduino makes the relay switch so that i get 12VDC to my fans and i can control the speed of those fans by a map that automaticly ramps up from a 10% duty cycle at 27°C to a 100% duty cyle at 60°C that sends it pwm signal directly from the arduino to my PWM input on my fans...
so is there an option where i can still use the pwm input on my fans ?

(a screenshot of my schematics is attached) 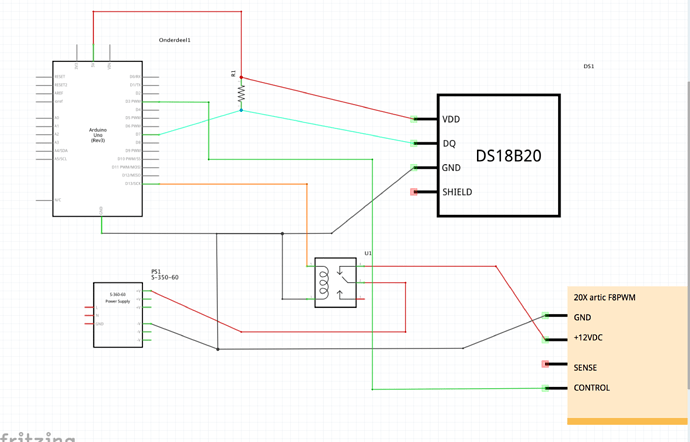 How much current does each fan's control input need?

How far away are the fans from the Arduino?

What relay? Most relays need more switching current than an Arduino digital pin can supply.

Do you have a specification for your fans? I've looked and I can't see any detail of what is expected at the PWM input. But even if 5V @ 490Hz is o.k. I'd guess that you would need some buffering to drive 20 of them.

MarkT:
How much current does each fan's control input need?

How far away are the fans from the Arduino?

Eurm not quite sure about the control current but the manufacturer recommends That when used in a computer to not chain more than 5 fans to the same fan header because some motherboards may only deliver 1.0A per fan so I don’t even know if they are talking about the current on the 12vdc line or on the pwm line

This another reason MOSFETS can be more useful than a relay.
They can be defined as simple ON/OFF devices as per a relay or you can use PWM to decide how much power (in your case speed) is produced.

Mapping the temperature to a PWM output is exceptionally easy and you also get rid of all the relay chatter and associated spikes that will produce.