Remake of the QlockTwo by Biegert & Funk.
Using an Arduino Mega Clone + DCF77 module to get the time.
No buttons needed, just plugin and wait a minute or 2 and it will set the time for you.

This is my first project using an Arduino, or any electronics for that matter.

It looks great. How did you cut the letters in the acrylic?

The letters are cut out of the vinyl sticker thats on the back of the acrylic.

Did you cut them yourself and if you did, what method did you use to do such a nice job.

It looks very well made. Congratulations.

I would love to see more build photos if you have them and the code you're using.

At first I had no idea what it did. For anyone else out there also unsure this is the site for the original: http://www.qlocktwo.com/

Nice, I will now make one

Off to the laser cutter I go!

That looks great! :o
I have been dreaming of building one of these since I first saw the original. I dreamed harder after seeing this instructable build using a self etched pcb board for the display.

Have you room for one more Mowcius?

I am not starting the project yet, got rather a lot of other stuff to do currently.

Who else would be interested in a laser cut front for one?

I would if they don't cost too much

Price will depend on the size, I will get back to you on that, probably about £20 (currently about $30 USD) for a square, with mounting holes and all letters laser cut, about 8" sq (21cm for you metric guys :D)

How is the laser cutting involved in here? What do you actually cut? The vinyl sticker?

How is the laser cutting involved in here? What do you actually cut? The vinyl sticker?

No, I would not do it with vinyl sticker like the copy one is done. I would laser cut the letters into 3mm acrylic and then you would just light up behind each word.

Code can be found at: http://sht.tl/GB
It's messy I know.. hope someone can use it.

There may be a problem with that code because it updates the time using a timer interrupt and if this occurs in the middle of your displaytime routine, the relationship between hours, minutes and seconds can be broken. You can fix this by disabling interrupts when accessing the time variables that can be changed in your interrupt handler. But why not replace your interrupt handler with a call to millis().

Hi RuudBurger - your build looks excellent. Nice finish and it looks so close to the original!
I hope you don't mind but I'm going to just toss mine into the thread. 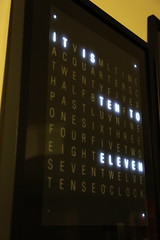 I built mine into an Ikea frame as I didn't have the tools or skills to do the woodwork. LEDs are controlled by two MAX7219 and time keeping is done with a ChronoDot. Also my first project with the Arduino...

How did you cut the letters?

The letters are laser etched on a painted sheet of acrylic. I have a friend who has access to one but there are many places that will do it for a fee.

The letters are laser etched on a painted sheet of acrylic. I have a friend who has access to one but there are many places that will do it for a fee.

@RuudBurger: I am a bit curious of where you got the custom vinyl sticker. Did you order it from an online shop? Do you have a link? I have been doing some research on where I can order a custom sticker like this, but I am a bit unsure about the quality, precision etc.

Very Nice job !
It's look like the "real" one