Question about photocells and sensitivity

So I have a bunch of "adaptors" I made with a photocell on them, and a 6.8k resistor that goes to ground so I can tell if the photocell has tripped. This works fine with the larger photo cells, but I have some tiny ones that don't work. I presume I need to use a different resistor, but I was unable to find one that worked. Should I be going up in resistance (100k) or down (1k)?

My second question has to do with brightness, ideally I'd like to use these smaller (and cheaper) photocells that can detect if a LED is on, normally they are in the dark and they trip when a light source comes on. Should I just use a smaller resistor (1k or under) for these as well?

What are "adaptors"?
The photocells are what - LDRs, photovoltaics or photodiodes/phototransistors? 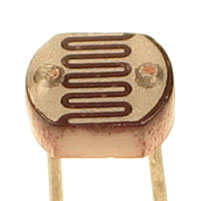 The adapters just shine light onto the photocell when they are on. The arduino just cares that there is light, I don't care about sensitivity.

You should be going up. This is because the smaller current changes make a bigger voltage difference when put through a larger resistor. However a jump from 6K8 to 100K is a bit big. I would go for a doubling strategy.

Of course the proper way to do it is to use a meter to measure the resistance of the illuminated cell and choose your resistor to match that.