I have a question that some of you may shake your head at, but I just want to be extra sure I am doing the right thing so I don’t fry a $30 Lilypad arduino.

For my project I have a configuration of 28 LEDs. 7 groups of 4 LEDs in series with 68ohm resistors pulling down to a common ground with all components powered by a single 9volt battery.

When I was in the prototyping stage of my project I had everything hooked up to a breadboard, including the 9volt on one of the vertical +/- rails.

Now that I have sewn everything together I have to power it, but now I don’t have a breadboard to plug into. My thought is that I need to connect the positive wire to the positive pin on the lilypad and the ground wire to the common ground. I think everything should be fine as all of the pins being used have the 68ohm resistors pulling down to the common ground but I wanted to make sure that the 9volt going directly into the positive pin on the lilypad without some kind of resistance isn’t going to fry my board and LEDs.

Here is a link to my project website which has pictures and descriptions in case my question was confusing.

Thank you all in advance for whatever assistance you can offer me!

You need to post a schematic. That web page crashed my browser. However it sounds like you are close if not over the limit on this project. With 9v powering 4 seriese LEDs are youq using transistors (I hope you are)

Sorry. My first post definitely could have been more specific.

An image of my set up without an arduino, ping sensor and 7805c. 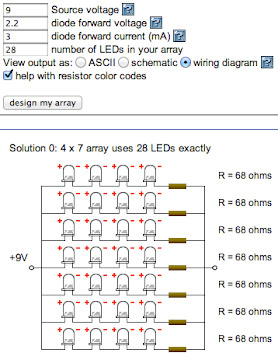 An above image of everything set up on the breadboard. Note: -I was using a regular arduino at this time. It's +/- pins were connected directly to +/- rails on the breadboard that were receiving power from the 9volt (battery just outside frame but you can see the red and black wire on the top right connecting to the board).

-You can see how each group of 4 LEDs has a resistor connected pulling down.

-There is also a 7805c transistor in the lower right corner of the picture. In this setup however it is only being used to make sure the ping sensor only receives 5volts. 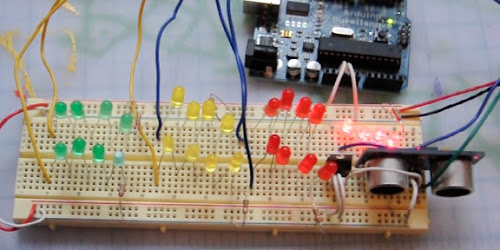 In this setup everything worked for me. I even left it on for over an hour once to make sure nothing would over heat.

So, I guess a second question I would ask now is if there is a more optimal way to set up my circuit.

One more picture of my circuit set up -- I apologize to you engineers out there, I'm an artist and this makes a lot more sense to me than a proper schematic.

I apologize to you engineers out there, I'm an artist and this makes a lot more sense to me than a proper schematic.

Problem is that you are asking engineers about this so you need to talk the right language. It is like going to France and talking to them in Russian.

From the diagram it looks like the arduino is not actually controlling these LEDs. Is this correct? If so this is fine.

However, if you have an LED connection to 9V and then that is connected to an arduino output through LEDs and resistors then that is not fine and could fry your chip. So you need to clarify what you are doing and produce a schematic that actually shows where the wires go.

Problem is that you are asking engineers about this so you need to talk the right language. It is like going to France and talking to them in Russian.

I guess I was crossing my fingers and hoping for a few visual learners, but fair enough. I will get to work on a new schematic, but in the mean time I will do my best to verbalize.

The arduino is witting HIGH to different groups of LEDs depending on the ping sensors readings.

In my prototype setup the battery connected to the breadboard powered all components including an arduino.

Thank you for your help Mike. I hope I’m not making you extra grumpy!

If the arduino output is going to four LEDs and a resistor to ground then I don't see how it is going to work. You only get the supply voltage out of an arduino and that is a maximum of 5V. That is why I can't follow what you are doing.

You forgot one very crucial detail about the LilyPad: input voltage. It's limited to 5.5V. It does not have an on-board regulator like the other full fledged Arduino boards. LilyPad is designed to be used with 3.7V LiPo batteries, and you need to mate it with the LiPower module which has a DC-DC Step-Up on it to bring that voltage up to 5V. Or find another way to feed it between 2.7V to 5.5V ... but don't go past that if you plan on actually using it, as opposed to watching it go up in smoke.

brigidrose: I wanted to make sure that the 9volt going directly into the positive pin on the lilypad without some kind of resistance isn't going to fry my board and LEDs.

As to your circuit, the confusing part for me is the contradiction between some of your diagrams. You say you are providing 9 Volts to each string of LEDs. Instead, it looks like you are actually only providing 5 Volts, coming out of the Arduino output pins. You don't say which pins, and don't give your code, so it's hard to tell what you are doing. Thus the questions.

It sounds like your project is almost done. Hope you can get past the last hurdles.

Studying your drawing, and trying to follow the blue and yellow wires in your breadboard picture, it all seems okay. You are only feeding +5V to your LED strings, not +9V as you believe you are. The +9V on the rail is not what you're feeding the LEDs, it's feeding the Arduino, which then lowers it to 5V through the digital pin.

So, barring the limitation on the input voltage for the LilyPad, it should work just fine, just don't connect a 9V battery to the LilyPad. Get the LiPower module with a small LiPo battery and you'll be all set. Oh, you have to recalculate your resistors for 5V, not 9V. You'll notice a difference in brightness. :)

KirAsh4: Get the LiPower module with a small LiPo battery and you'll be all set.

Any reason she cannot just take power for her Lilypad off her 7805 voltage regulator?

Yup, she can do that too. But I still wouldn't use a 9V battery simply because those things don't have enough juice in them She's better off with 4x AA batteries providing 6V and a lot more mA compared to a 9V. But that's just me.

KirAsh4 raises a good point. As you are running your LEDs on just 5 Volts, and your ping sensor and Lilypad require 5 Volts, there is no reason to use a 9V battery or your 7805 voltage converter. One of the Sparkfun 5V power supplies for the Lilypad should be able to power everything.

And just to reinforce the point, you set your 28 LED circuit up to use 9 Volts, but you are running it on 5 Volts. That works, as you found out. (Overpowering burns things out, but underpowering rarely causes a problem.)

But that's not a good practice. Better to design things correctly. If you want to work on a solid design, we need more information to be able to help. For example, I don't trust your LED specifications. The 2.2 forward voltage sounds plausible. The 3 mA forward current does not.

All that said, if you just want to finish your project and be done with it, I think it will be safe just to run a wire from the 5 Volt output of your 7805 voltage regulator to the + pin on your Lilypad. (Just like you do to your ping sensor.)

Be sure to connect all the grounds, including the - pin on your Lilypad and the - side of the battery.

Thank you all so much for your help!

The last couple of posts were very helpful and made a lot of sense to me. I'll make sure to post my outcome once I make some changes and finish my project.

KirAsh4:
Yup, she can do that too. But I still wouldn’t use a 9V battery simply because those things don’t have enough juice in them She’s better off with 4x AA batteries providing 6V and a lot more mA compared to a 9V. But that’s just me.

Well, just be careful about feeding a 7805 6V and expecting to get a rock solid 5V out - I wasted a bunch of time on a project that would almost work and then the processor would reset.

So perhaps feed it 6x AA batteries for 9V? But it’s a very valid point (plus it will be cheaper in battery cost as well)

You forgot to either disable, or change the BOD on the processor. There are several levels of BOD you can use. Read the datasheet for the microprocessor you're using.

One more note to think about. If you power everything through your 7805 linear voltage regulator, you will waste half of your 9 Volt battery capacity as heat. The 7805 chip is cheap and convenient, but inefficient.

If you want to be more efficient, you should move to a switching voltage regulator, something like this. www.murata-ps.com/data/meters/mpm_78sr-2a_a00.pdf

That will save a lot of your battery power.