Hi guys, I come from a software background and am new electronics.
I'm working on the following project and need some advice:

The questions I have are:

>Will I wear out the LED’s quicker if I used power injection on all 20 rows?<
You won't hurt anything. You are just putting shorter and/or fatter wires in parallel with the conductors built-into the power strip.

>Would the ATmega328, capacitors, resistor or crystal be at risk if the LED strip actually did pull 24 amps? Is the 10uf capacitor still acceptable with a current that high?<
That should be OK but I THINK Adafruit recommends a 1000uF capacitor with ws8212's. The power supply supplies the current. And you should have a 0.1uf "bypass" capacitor "close" the ATmega chip. That's pretty standard for chips of any kind.

> If I did accidentally go with a PSU too low (say, 2 amps), could I end up damaging my components by drawing the maximum rated current of the PSU? Or would the LED’s just simply be less bright?<
If you exceed the current rating on the power supply the voltage will drop and "bad" or "undefined" things can happen to the power supply (but not to the connected components). A well designed power supply will usually just shut down but a fuse could blow or something worse could happen. When the voltage drops the microprocessor program might glitch or crash and addressable LEDs also each have a chip that could "glitch" and behave unpredictably.

The dimming is also based on PWM so at 10% brightness the average current is 10% but the peak current is 100% for 10% of the time. Most power supplies will work OK as long as you keep the average below the power supply's maximum current rating but it's not guaranteed.

Where do things connect to the power supply your frizzy picture is just that a picture. A schematic would be a whole lot better and would show all the interconnections etc. Only a fool would deliberately undersize a power supply. It is the core of your system, and if anything goes flakey it can manifest itself in a lot of different ways in your project. I have seen engineers spending weeks trying to solve an underpowered power supply. Depending on the design of the power supply and failure mode it can damage parts. Yes you can power everything from the same 5V power supply, just run seperate lines for power and ground to the arduino and to the LEDs etc. You might want to reconsider the 22pf capacitors, your assembly is adding a fair amount of capacitance. You also need to use reasonable size wire to connect everything. 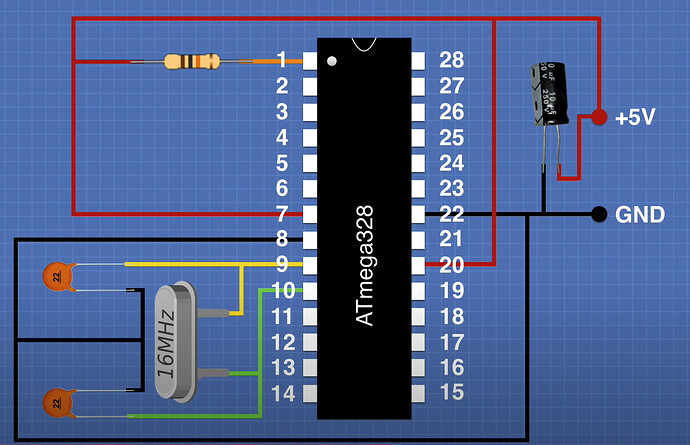