How often do you guys use them?

And i got a led (more then that only on it connected but lets work on the led), the led is shining a litle, far from bright. Atm i have a 10k resistor in front of it, i know it's much, but for the purpose of learning i want to choose the resistor by meassuring.

I meassured the voltage from digital output pin 7 which says 1.58v, is this normal? (the 5v output from the board is giving the expected 5v). I also meassured current which shows 0.33 at the display when the multimeter is set to the range of 20ma so that makes 3.3 ampere if i'm right.

"How often do you guys use them?"

All the time, generally for LEDs & relay coils.

I meassured the voltage from digital output pin 7 which says 1.58v, is this normal?

Depends on what you were doing with pin 7.

I also meassured current which shows 0.33 at the display when the multimeter is set to the range of 20ma so that makes 3.3 ampere if i'm right.

Ohm's law is one of the basic's you use when working with electronics. You cannot do electronics without these formulas.

The pin should give approx. 5V when it is a logic one, 1.58V can mean floating but can also mean a logic zero. This situation is not ok if you use TTL logic. Your do not provide enough info to actually comment on this

If you use a digital multimeter in the range of 20mA it should give you the actual reading in correlation with the scale, so 0.33 should be 0.33 mA and the DMM should give this info on the display. On a analog multimeter you have to check the maximum reading on the scale and calculate the value according to your reading. Often the scale has a lot of different values to help you read the value. If the needle is half way it should be a 10mA reading etc..

Read the manual of you multimeter to see what how it should be used, although they are often very intuitive.

A 10k resistor will nearly have the whole voltage over the resitor with a minimum of current going through it. Check the internal resistance of you multimeter in the manual this can influence the measurement.

Hi, after many years, I still have these mental images:

...just put your finger over the value you want, and do what is left...

And if you want ALL the ways of figuring stuff: 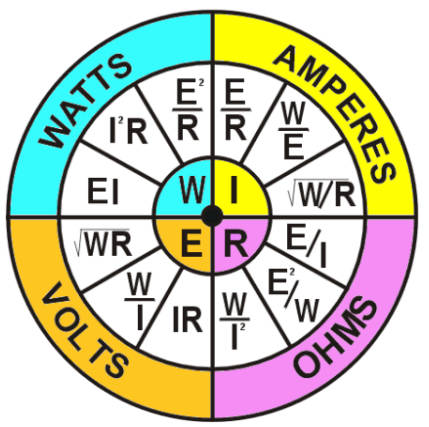 The electronics world is FULL of cheatsheets, and we love them...

Engineers don’t use cheat sheets - we just derive anything needed!
All you need: V=IR, P=IV, substitute as needed for anything else,
and Black-Brown-ROYGBIV for resistors …

that is another formula, how many are there?

floating but can also mean a logic zero?

Read the manual of you multimeter to see what how it should be used, although they are often very intuitive.

I'm checking my manual of the multimeter whole evening since it was my goal for today,

Depends on what you were doing with pin 7.

only a led and a resistor,

Quote I also meassured current which shows 0.33 at the display when the multimeter is set to the range of 20ma so that makes 3.3 ampere if i'm right.

for the 'cheat sheets', the first one, how do you knof if you must multiply or devide?

To measure current with many multimeters, you have to move the sockets the probes are plugged into.

With respect to what?

when the multimeter is set to the range of 20ma so that makes 3.3 ampere if i'm right.

Tough to measure 3.3 amps on a 20 milliamp range. Did you read the manual?

clankill3r: that is another formula, how many are there?

Let's modify that a bit, to indicate points where you would take measurements.

Try the same exercise with this:

I also meassured current which shows 0.33 at the display when the multimeter is set to the range of 20ma so that makes 3.3 ampere if i'm right.

This is a good example of "Checking your work." You could not possibly measure 3A out of an I/O pin on the Arduino. If a pin supplied (or accepted) more than 40mA it would be destroyed.

So whip me up a 4 pole, minimum ripple, low pass filter with a 10khz -3db response with 1K input and output impedeance without using filter tables (i.e. cheat sheets).

Stuff like that I look up in a book 8) Or the internet - okay, I guess that's a cheatsheet :grin:

Here's some 2 & 3 poles for example, took me maybe 30 seconds to locate - hard part is digging thru the parts drawers to find the needed values!

Filters, Filters... It was a filter what led me down this road of complex pleasures... and I never even stopped to thank it...

1972: I am trying to design a 5-pole Chebyshev high pass filter that will carefully attenuate excessive bass below 100Hz, like on "Leaving on a Jet Plane" by Peter Paul and Mary, or "Magic Carpet Ride" by Steppenwolf. I am driving an audio amplifier putting out 33,250 watts RMS to modulate a 66,500 watt AM transmitter that puts out 50Kw. We have extensive AGC (Automagic Gain Control) to push maximum modulation without invoking the ire of the FCC by exceeding 100%, and the bass in those songs pumps the rest of the spectrum up and down horribly. Also those cheap transistor radios sound like crap with the 2 inch speaker flapping back and forth at frequencies they could only handle in their dreams.

So, attenuate the Low lows. BUT the FCC insists that we be within 3 db at 100Hz. BUT we only have to MEASURE at 100Hz, so, hey,if there was a little ripple and the curve just happened to go thru 100Hz at 0db, WhatTheHeck.

Try doing that with a sliderule.

So I used a desk calculator. I could do a design in about, oh 1.5 hours. Then I could build it, test it, and miss big.

So the local SUNY branch had just got a COMPUTER. A DEC PDP11 running BASIC. Whatever THAT was. Ran 5 teletypes.

I spent a few nights sneaking into the computer room. They had a 1-page paper about BASIC taped on the wall. The Guru had the Book locked in his office. Eventually I got the same answers for all the resistor values as a manual design! . The next week I got a LOOP that made a TABLE of values. Holy Crap.. Maybe there was something about these computer things. Maybe I ought to learn more about them.

I built some Opamps with matched dual transistors from Fairchild in the first stage, and 3 other modern SILICON transistors, running on + and - 24 volts to have plenty of headroom for line level audio. Built the filter, came in at 1AM Sunday with the whole station to myself, and ran it. The frequency response curve was within 1 db at 100HZ and within 3 db elsewhere. Legal! And it went down like a stone below 100HZ. Listened to some pop songs, and the troublesome PPM and Steppenwolf. Did AB. On our test set of 5 different radios including a car radio there was NO apparent loss of bass, just cleaner bass, and the damn volume pumping was gone! Later demoed for music director, DJs, Management. It was declared a Trade Secret and I was not supposed to talk about it or leave the diagrams anywhere.

Of course today every podunk radio station has a digital audio processor that does all this and more.

...Don't blame Crossroads for setting me off on stuff like this :roll_eyes:

terryking228:
Filters, Filters… It was a filter what led me down this road of complex pleasures… and I never even stopped to thank it…

Tomorrow morning, I’m going to make a point of thanking my coffee filter.

1972: I am trying to design a 5-pole Chebyshev high pass filter that will carefully attenuate excessive bass below 100Hz

There are several vehicles in my neighborhood needing something like that.

I'm having some trouble measure the voltage drop (forward voltage?) of some LEDs to which I do not have data sheets for. The LEDs are green and blue.

My understanding is that the multimeter does not have enough voltage in the diode test mode to give an accurate reading of the voltage drop of the LED. So how do I measure it?

I can construct a circuit with 4 AA batteries in series, the LED, and a 1/4w 470 ohm resistor and the LED lights and it is bright.

I'm trying to make sure I use the correct resistor so that the LED is receiving an appropriate current: 20 mA. (This is what I was shooting for. I assume its a good current.)

I've measured the battery pack and the voltage is 4.99v. The resistor measures at 469 ohm.

But I am confused on where to attach the leads for the multimeter and what setting to use. I've tried pretty much all combinations I can think of and can't really get an answer and I don't want to continue messing around with it so I don't do something stupid and break the multimeter.

The only time I can get a reading is when the LED is connected in the circuit and the circuit is powered and when I get readings, the numbers fluctuate wildly. To be honest, I don't even know what I'm testing. :(

To measure voltage drop you use a voltage range, not a diode test function.

Set the meter on the "Volts" scale (20V, for most cheap meters.) Put one meter lead on each side of the LED itself.

The current through an LED doesn't HAVE to be 20mA; that's the typical max rated current. I'll usually calculate my resistor assuming that the LED drop is 0 (5V/20mA = 250 ohms) Then any resistor greater than 250 ohms, or any LED with Vf greater than 0 (ie ALL of them) will cause the current to be less than 20mA. So I pick something from the pile of resistors that I have a lot of (470 ohm, 1k ohm, whatever) and evaluate "is that bright enough" from a subjective point of view. There are only a couple of applications where I really want to put the max rated current through an LED...

May I steal that for my Wiki??

Go for it Terry. How's life in Italy treating you?