Re: Using an LED as a touch/light switch

Yeah these keypad thingys are pretty expensive but I guess thats what u have to pay for custom music interfaces. U can get a korg padkontrol for $190 USD and that is a professional product so $240 for a kit that u build yourself seems expensive. I think the sparkfun ones are so expensive cause of the size of the pcb (10cmx10cm). It's actually cheaper to buy the keypad kit from monome if you want to make a 8x8 grid. If you've got the programmer then thats one less thing u have to buy

Yeah if i could find an 8x8 toy thingys, all i want is the keypad, leds and switches and i'd have to hack it apart and use my own interface chips. I'm gonna keep looking in the $2 shops, surely there is something out there!

Yeah if i could find an 8x8 toy thingys, all i want is the keypad, leds and switches and i'd have to hack it apart and use my own interface chips. I'm gonna keep looking in the $2 shops, surely there is something out there!

Ok I probably shouldn't be telling others about this, because it will make my chances of finding a ridiculously cheap one on ebay that much harder, but look out for "Lights Out"

Lights Out is an electronic game released by Tiger Electronics in 1995. The game consists of a 5 by 5 grid of lights. When the game starts, a random number or a stored pattern of these lights is switched on. Pressing any of the lights will toggle it and the adjacent lights. The goal of the puzzle is to switch all the lights off, preferably in as few button presses as possible. Merlin, a similar electronic game, was released by Parker Brothers in the 1970s with similar rules on a 3 by 3 grid. Ano...

I knew it!! ;D I'm already looking on ebay

Have you done anything yet?

I'm wondering how hard it would be to wire up some POTS, attach them to a board with a couple of buttons and have a go at GarageBand or something... similar to the m-audio icontrol.

That would not be very hard.

All you have to do is read the pot values and scale them to be in the range of the MIDI parameters used by GarageBand.
Then send it over to the PC as MIDI.

There are many examples around sending MIDI from Arduino. One good source of information for this is here:

little-scale: arduino (scroll down a bit)

EDIT: Implementing preassure / velocity sensitive pads would be quite a challenge though.

I saw this over at the monome forums, looks like it is possible to use only LED's as a touch switch interface. You can check it on youtube here 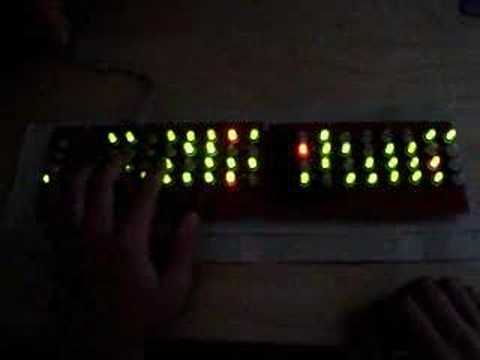