Receive E-mail without a PC

I have an application that needs to sound a buzzer and flash a light when an email is received .

The room has a Ethernet port but no PC.

What hardware other than a PC can be used to interface with an Arduino to flash a light and sound a buzzer when a email is sent to a certain address?

You can use an Ethernet Shield to connect your Arduino to your Ethernet port. An email client running on the Arduino can check for new mail. See: Arduino Playground - Email

This seems like what I need, but the email client you just linked to sends emails out, I need to receive emails.

I don't need any more complexity than: "turn a light on when a new email is received"

megamef:
This seems like what I need, but the email client you just linked to sends emails out, I need to receive emails.

Sorry, try this one: 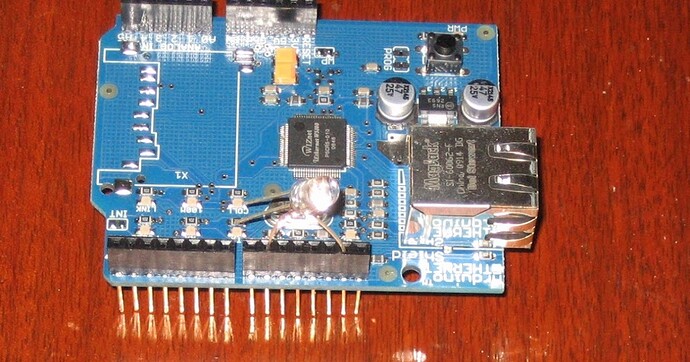 Since it turns out people actually occasionally READ this blog, I decided it was time to go back to do an Arduino project and try something ...

It fetches the number of unread emails. If that number is zero, turn off the light, otherwise turn on the light.

Yep, this and the Ethernet shield look like exactly what I want.

Sorry, I've looked at this a bit more and it seems that the code you posted only works with a POP3 email that is NOT SSL enabled, and a quick Google search shows that there aren't any free email addresses with without SSL any more.

I've come across quite a few people recommending the Raspberry Pi to do the job using Gmail and a pyton script.

The only thing is that I've used Arduino before but haven't used a Raspberry Pi, which would be more appropriate?

If your email provider doesn't support non-SSL POP connections then you should probably use a cheap Linux/BSD platform like Raspberry Pi, Beagle Bone Black, Arduino YUN, or DDWRT (runs on many WiFi routers)..

Thanks OK, I think i’ll go the Raspberry Pi route.