Hi,
I had bought a Rover Robot along with an arduino WiFi Shield.

Now my problem is that since the PCB V2.0 of the rover robot is hooked to pins 5, 6, 7, 8 for its integrated motor control and since the arduino wifi shield uses the same pin 7 for handshake between them, the is an overlapping situation and the shield doesnt work.

Will it be okay to reconfigure the free pin 2 on the PCB V2.0 by connecting it to the bend pin 7 of the WiFi shield.
I need a way out of this problem ASAP, buying a new compatible shield is not ideal for me.

However you deal with the hardware problem you will have to re-write some code.

As for the hardware problem, just don't stack the wifi shield, try putting it side by side with the arduino and then use jumper wires to hook it up.

Just for any one else, the WiFi shield is not compatible with most of of the motor shields, however the wireless/SD shield and the XBee shield fitted with a WiFly module (it has the same footprint as an XBee module) works very well.

I actually solved that by simply bending my wifi shield's pin 7 and connecting it with pin2 . but now unfortunately i have a failed firmware update which has made the board of no use because now my HDG104 WiFi module firmware inside the dataflash is empty.

Please help if u know a way out 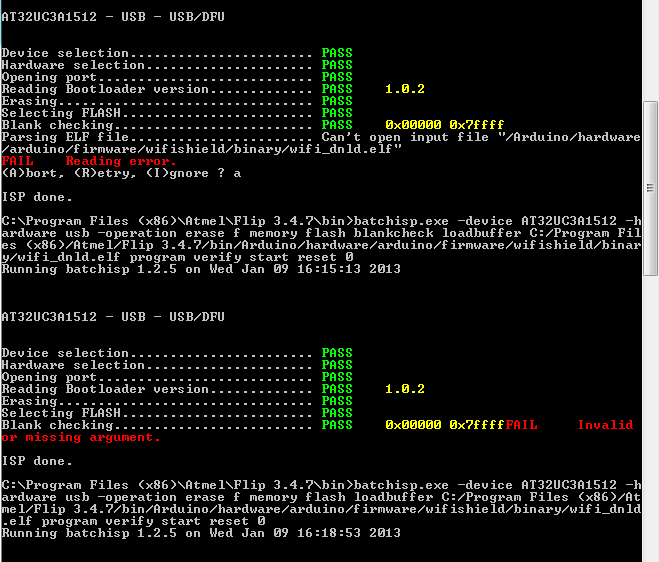 problem solved @ not_found
AVR32 Studio 2.6 can be used along with its tools to update both the firmwares
1.HDG104 WiFi module firmware inside the dataflash.
2. WiFi shield firmware on the AT32UC3A1256.