I am trying to figure out the proper way to hook up a reset button to the 84, according to the datasheet it needs 0.2v to 0.9v to trigger a reset, so should I just put a proper sized resistor between 5v rail, momentary button, and the reset pin?

If a bootloader and capacitive auto-reset circuit is used, a small signal diode (1N914, 1N4148, etc.) in parallel with the resistor, cathode to Vcc is recommended. But that's probably not the case with an ATtiny84.

Would that not supply voltage to reset until the button is pushed causing no power to reset while pushed?

Yes, that's the point, a low level causes a reset. The voltage specs are worst case. At worst, the chip will consider anything below 0.2Vcc to be a low level, and anything above 0.9Vcc to be a high level. Pushing the button forces the reset pin to 0V. When the button is not pushed, the reset pin will be held at Vcc by the resistor.

If that is the case then how come the attiny84 runs fine with the reset pin floating, would that not then cause it to be stuck in reset and never run?

Duh I feel like an idiot now that I think about it... if it's floating it isn't being driven low at all because it's not to ground... BUT that brings me to my next thought, if it works floating why couldn't the button be connected in-line to ground with no resistor from Vcc?

Ok I just tried it on the breadboard, 10k from Vcc to reset, button from Reset to ground, seems to work (I have it running the LED Fade sketch), when I hold down the button the LED stops fading, and as soon as I let go it starts fading again! So I guess that works!

Yeah it may run while floating, or not. If it does, it's just luck. Remember input pins have very high impedance, so if there's nothing to pull it to ground, then it'll run, but EMI or static or the phase of the moon XD could change that from one second to the next. Likewise, there's nothing to pull it to Vcc. So the resistor is to ensure the pin is at (or very, very near to) Vcc and stays there unless the button is pushed. Random un-commanded resets are definitely a thing to be avoided!

Awesome thanks so much for your help! I just tested it on breadboard and it worked perfectly as you said to do so. I am making a attiny84 proto board with 14 inline pins to easily plug into a breadboard, my first ever PCB circuit I made! Did it earlier and it came out perfect, so now I just added the reset switch to it! I still have a 5v 500ma regulator to put on there too yet.

Pics from before I added the reset button :).

Very cool. I've played with some of the other ATtiny MCUs, but not the '84. Someday...

I like the 84's. I think of the Tiny series they are the closest to the atmega328 in terms of how the timers and other registers are layed out. They also seem to behave well when given a bootloader.

I have to say, you have done a great job with that peice of veroboard, it's very neat indeed!

Thanks! Here is a pic after adding reset button to it, next step is 5v regulator up in the top right corner somewhere, 2 caps for it, and some sort of lead for power input and I think it will be finished :). 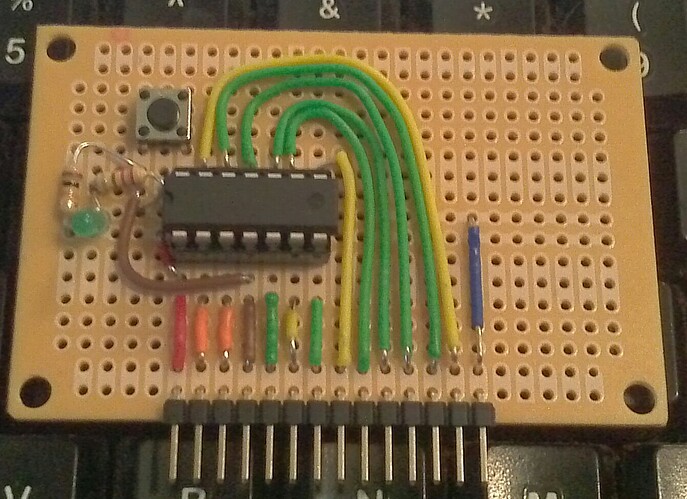