Resources for making PCB board layouts

Does anyone know where I can source images for the templates of certain devices on a PCB Board?

Is there any such thing? I tried searching the internet but have not found anything yet.

I am looking for a pin configuration at size as for devices such as DIP sockets, relays, LED's, Transistors, etc. to import into a layout program/art program of some kind to produce PCB boards.

I hope I'm explaining this in a way that makes sense to everyone.

Thank for any ideas that you can shoot my way.

The footprints come with the designs package.
Packages also let you design new ones as needed.

You can Google, for example:
dip footprint dimensions

and for SMD
smd footprint dimensions

http://www.cadsoftusa.com/download-eagle/freeware/
Bit of a learning curve, but well worth it.
Leo..

Thanks Guys! I'll check it out.

(Wow... I did't know there was a limit to the number of posts you could make in a 5 minute period?)

If you decide to give Eagle a try, two things to do - read the tutorials that come with the install and check out youtube - there are a number of good tutorials there that will help you get going. Hint: use "net" to connect components in the schematic not "wire". Yeah, I've heard the arguments too - that's just the way it is

Wawa:
http://www.cadsoftusa.com/download-eagle/freeware/
Bit of a learning curve, but well worth it.
Leo..

For me at least.. once I grasped a couple basic concepts.. things were much smoother for me.

1.) Eagle was designed to be used with a 3-button mouse (left, right and scroll/click wheel).. each of these button events will give you different menus and/or behavior..

2.) Eagle also behave the opposite than most US/Windows applications.. where are normally we would select the object/text (whatever).. then go to the tool bar to apply said effect/formatting..etc..

Eagle is the opposite.. you need to select the tool first, then apply it/select the object you want it applied to.

Very robust community and support out there for it too.

Less Complicated and more with the hobbyist in mind... (But does cost money)

What about OrCAD Lite?
Any opinions?

I really don't like Eagle. Very steep learning curve, very expensive if you need to use it for a commercial project.

If you want small boards only, there is a free version of the "dead program" WinQcad .

I like Eagle a lot. I have a Pro License and have done some amazingly dense 2 layers boards with parts on both sides. Luckily I was not the one assembling them!
MrsCrossRoads and I have started doing double sided assembly now too, tho not very high parts density yet. I do like the mini system on a board tho! Here's a 2560. We did up a couple 2561's last night, will post some pictures later. Both have all pins (except xtal1 and xtal2) brought out for header pin access.
http://www.crossroadsfencing.com/BobuinoRev17/ 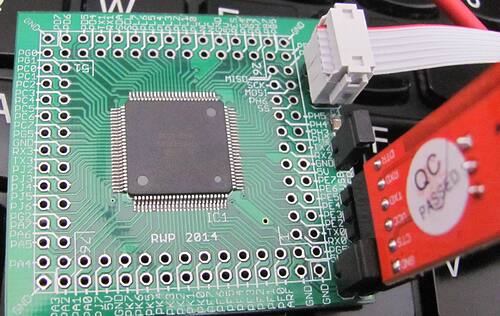 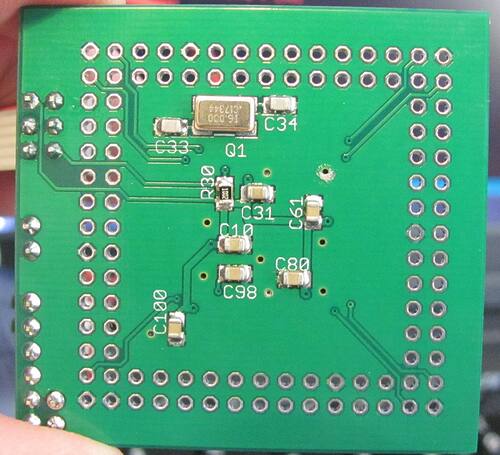 And you can put a lot of stuff onto the free eagle 80x100mm double sided board.

I need a LED and mounting holes

Luckily I was not the one assembling them!

Did you solder the controller with toaster oven and other side by hand?

Very nice, does it work? 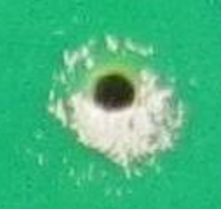 We did both sides in the toaster oven. Bottom first, let cool thoroughly, some Kapton tape just in case (didn't want the crystal falling off), then the top side. Then added the male header pins, attempted to bootload, added the DTR enable jumper and the 5V from FTDI jumper, then bootoaded and added Blink to make sure the interfaces were working.
I've received a request for 2 already.
Not sure what's at the bottom of the via. Residue from the Kapton tape maybe picked up some dust or something? Or maybe the some alcohol I wipe down the pads with before applying solder interacted with the tape during baking?
Had not noticed that the zoomed in picture before.

Will add holes and an LED like I did on the more recently designed 1284 and 2561 boards. This design was done a while ago, we finally got brave enough to try putting these processors on.

Well, that and ordered a couple more as the first pair I ordered and sat on for a while seem to have vanished.

I have them listed at $46 right now. About $22 in parts, but a 3-step process to assemble them, and then bootload/program, so it takes time.