I currently have a monoprice dual band IR repeater in my home theater rack. I'm automating my setup and want to replace the repeater with an arduino. That way I can use a mobile app, mqtt etc. to send signals. I would like to reuse the emitters and receiver as they are all run and are convenient.

The unit consists of a receiver with a ring/tip/sleeve 3.5mm male jack, a 5v module with (5) 3.5mm female tip/sleeve jacks and 2 dual emitters with 3.5mm mono jacks.

I hooked the receiver up to my arduino and was able to receive IR using the IRremote library. This part I have.

I hooked the emitter in using a 500 ohm resistor and if it is basically touching the equipment's receiver it will work but the range is abismal. My assumption is the 500 ohm resistor is too high but unlike regular LED on a standard full on circuit, I have no idea how to gauge how much current is going through the thing. Being that it wasn't purchased as a component, I have no clue what the specs are.

Again, it's really not a cost thing, more a this stuff is pulled through the walls kind of thing:)

I have to chuckle at the "Dual Band IR" description. It refers of course to two alternate modulation frequencies.

Well, a 500 ohm resistor is quite correct, but it must be feeding the base of a decent transistor which in turn switches more like 30 ohm resistors to feed the IR LEDs. Actually, the same 500 ohm driving the gate of a true logic-level FET would be more to the point and you must have a 4k7 pull-down on the Arduino output that connects to the 500 ohm resistor to prevent the FETs being held on while the Arduino is in reset/ starting up.

I’m sorry, I don’t fully follow. I’m a computer guy that dabbles in electronics so I’m a little slow to learn.

You say the 500 ohm is feeding a transistor to switch 30 ohm resistors feeding the LEDs. Are you suggesting this is what “monoprice” is doing inside the module I’m “tossing”?

I have it hooked up pin 3 to 500ohm to anode and cathode to arduino ground pin.

This DOES work but the range is a few inches at best.

If I understand your statement as I said above… are you suggesting I should substitute the 500ohm in my setup with a 30 ohm?

I’m not sure why a fet comes in. All diagrams I have seen of people doing IR simply have the emitter LED connected to a PWM output with resistor. Are you suggesting the digital pins aren’t powerful enough to saturate the emitter?

moxified: I'm not sure why a FET comes in. All diagrams I have seen of people doing IR simply have the emitter LED connected to a PWM output with resistor. Are you suggesting the digital pins aren't powerful enough to saturate the emitter?

At 500 Ohm, the IR LEDs will be pulsed with about (3.6/500) 7.2 mA. You want them to be pulsed with 100 mA each and there are four of them, so you really want 400 mA and for this you need a FET or a couple of "ordinary" transistors in cascade to provide the current as you cannot use the Arduino to drive more than about 20 mA itself (or a single 180 Ohm resistor). 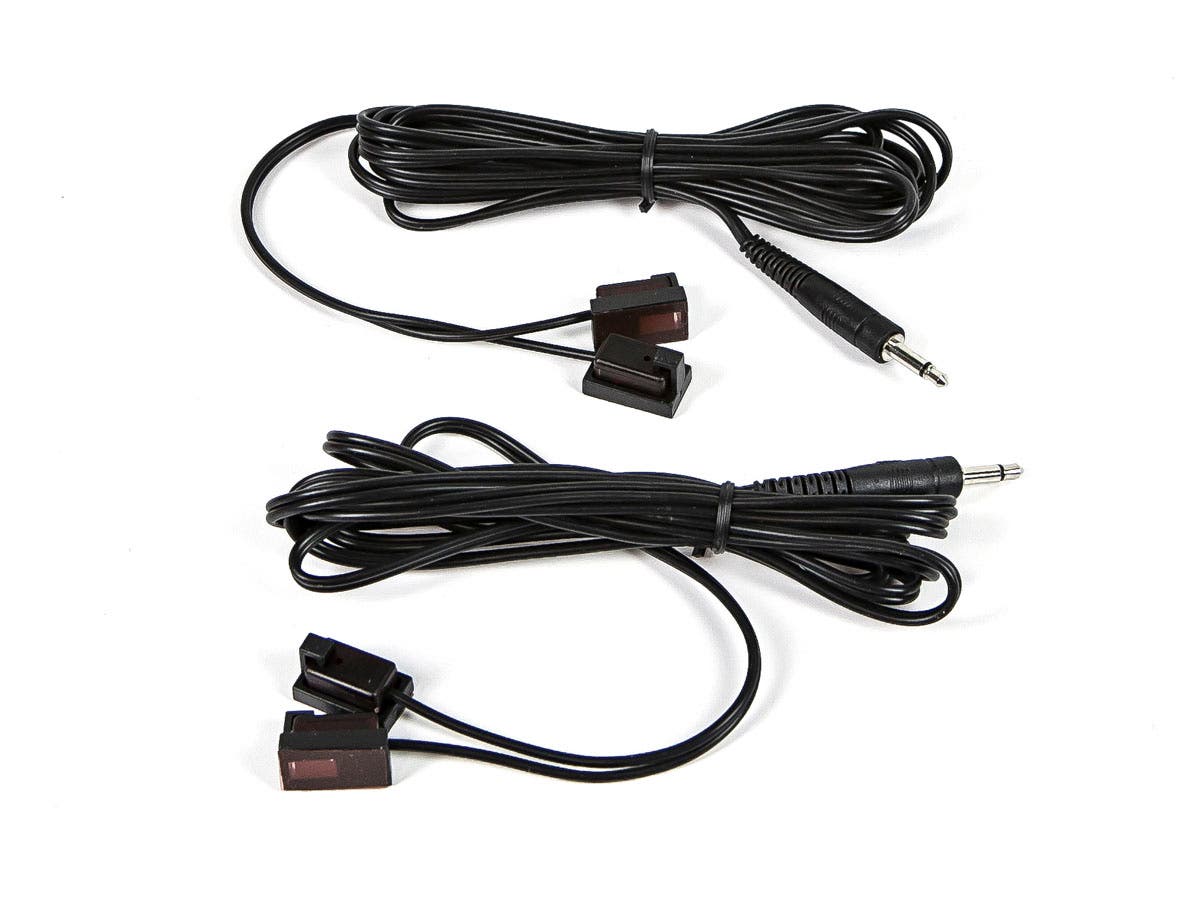 I wonder whether these LED assemblies have the resistor incorporated? They should, as there should be a separate resistor for each LED. To find out, connect one to 5 V through a 47 Ohm resistor and measure the voltage across the plug. It will be about 1.5 V if there is no resistor, but over 2 V if a resistor is present.

So the "instructables" (a bad word here!) you have seen show the LED driven directly by an Arduino output with at least a 180 Ohm resistor in series (because if the resistor value is less, it is really dangerous advice)? Well, that is good for demonstrating IR communications across the workbench at least.

OK, I get ya. I was actually only driving a pair of them... I don't need all four but still, I get you. Not that it matters as I am with you on instructables... I was going off of spark fun mostly which may not be a whole lot better :)

No, don't cut anything. :astonished:

While many people (particularly Grumpy Mike) will assert that you must not wire LEDs directly in parallel, in the real world of consumer electronics, it is routinely done. This is why on your cheap 12-LED torch, as the batteries go flat, some of the LEDs fade out before others. (I do not buy those any more, only single LED "Cree" ones with LiPo batteries. :grinning: )

It does mean that in your original control box, the resistor was in the box, and presumably a separate resistor (or separate driver transistor) for each of the two pairs.

With a suitable FET (by preference), you should be able to pulse the LEDs at 200 mA per pair. Note that you must limit the duty cycle (presumably the IRremote library does this already, but you would want to check) to less than 40% and ensure that they cannot accidentally be left switched on, which is why I pointed out about the pull-down on the FET gate. The resistor value would be ((5-1.4)/0.2) 18 Ohms.