I posted her a while ago with some low quality videos of an RGB LED chaser. Since then, I've made up some eagle files for a shield PCB. I wanted to get some opinions.

First, how does the PCB look, it seems kind of clunky to me.

Second would anyone actually be interested in a kit for a shield like this? I talked about my software in the previous thread and it's very simple to control the LEDs and very responsive, so it could easily do interesting things as a PC display or even a more colourful POV toy.

Third, I have those 2 buttons and a pot going to analog inputs for other functionality a user might want to add (even a photoresistor in place of a button). Does that sound like a good idea and is there anything else I should consider there?

The LEDs themselves use Digital pins 2-12. I have a reset button and ICSP header, but I'm not even sure if they're needed. 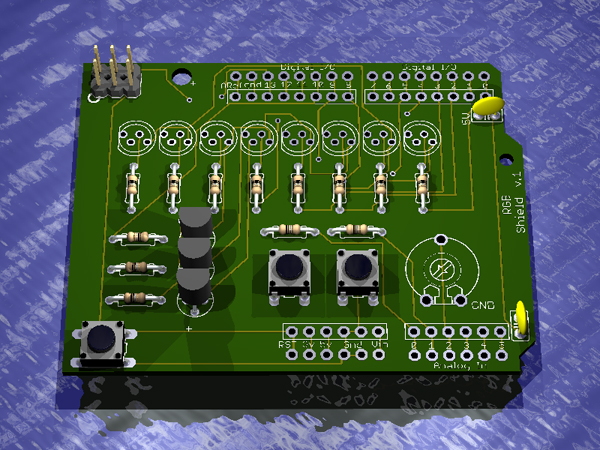 Is it real, or is it Memorex? Sorry for going off the subject, but how did you make that image?

Sorry for going off the subject, but how did you make that image?

This looks strongly like it was done with Eagle3D.

Is it real, or is it Memorex? Sorry for going off the subject, but how did you make that image?

As spiffed said it was done with Eagle3D. It's a great little tool, but as you can see the parts library is never going to have everything.

No comments on my actual questions though? :-[

Sorry. I've been thinking on it a while and I can't think of much I'd personally apply a row of RGBs to. Would be nice for direct feedback while experimenting with a new sensor. Could also see it in a box doing a real-time display for metal detector or something else.

But, really, I can think of more ideas for that software than a row of RGBs. A row of 7-segments might be a nice bridge between the cost and display quality of a full LCD display, but still allow you to get some numbers back. Drivers for 8 x 8 LED matrix might also be nice. But how to adapt the form factor?

Well...since these are display elements, this is likely to be the top shield in the stack. Omit the stacking headers. Frees up space for a specialized display header, so you could run ribbon or wire tangle to a display mounted somewhere else.

Very clean, professional board, tho. If I had an application, I'd snap it up.

With how popular the POV toys are, I was thinking an RGB version would get some attention.

I've thought about a 7-segment segment driver. Given what those 7-segment displays cost, I think this way would be more expensive than an LCD shield for more than a few digits, though they do have a certain appeal.

A matrix driver might be a good idea given that the ATmega168 is cheaper than those dedicated driver ICs. With 3 74HC138 decoders, I should be able to handle an RGB matrix off a single Arduino. Though I'd still be using so much IO and processing power I'd want it to be a slave chip to a main Arduino.

I included the stacking headers more to keep it open and expandable, so it's easy to solder in other devices. I'm more thinking I should lose the ICSP header. And I should be able to fit 10 LEDs on there if I wanted.

For what it's worth, I figure a complete kit should cost $20-30, which isn't bad considering the LEDs alone are $2 each at Sparkfun.