The resolution would only be 64*64 pixels, but writable as 32*32 pixel blocks Only 3 blocks can be used, one for red, one for green and one for blue but the block can be moved, copied, inverted etc to make patterns

Obviously all R/G/B blocks overlaid in the same place would create white, and other combinations follow suit

The sync would appear at PB0/OC0A, red at PB1, green at PB2, blue at PB3, and possibly an audio input at PB4

I have worked out this resolution CAN be done at 16mhz, but only by using the internal clock, so there may be errors created by temperature or just plain off-day !

I am writing this along side the 32MHz 128*96 (TVout clone) that I have adapted for RGB VGA video, which forms the precursor to a major video driver I shall be writing for the STM32 72MHz maple-style micros

It looks like I can make a straight transition from TIMER1 (used on other micro's within TVout) to TIMER0 on the t85, although the resolution has dropped from 16bit down to 8bit, but that doesnt bother me as all I need to do is divide the load value by 256 and check against the timer prescaler

After doing lots of internet research I found this...

This is mental considering the lack of pins and ram the ATTiny85 has !!

Its not what I want to do as I am not into gaming, but I have had a look at some of the ideas going on there and may have to consider a few

Main change will be the upgrade to 32mhz clock gen, as I am only considering PAL at the moment this is perfect for the H & V sync timing, and this gives me 26 clock cycles to pull data from red green and blue arrays (plus some clever manipulation) and write it to the screen

This is going really well, I have changed the resolution to 48*48 pixels but it is done in the following way...

the screen area is split into 4 quadrants, each quadrant is 24*24 pixels I have 72 byte arrays for Red, Green and Blue which map to the top left quadrant

I have flags to determine if each of the red, green or blue arrays are switched on in any particular segment, OR mirrored vertically or horizontally

The permutations for creating amazing video effects are almost endless and the whole 48*48*8 colour pixel array takes only 216 bytes to store, less than half the 512 available on the t85

I have also created a second video mode which combines ALL the data arrays together in one continuous array so that I can create a 40*40 pixel screen in ONE selectable colour, but there wont be any mirroring or copying involved.

I am using the following connections :

this leaves pin2 for connection to the 32mhz clock generator.

Therefore, if I alternate between a RED and a YELLOW line I will get generally ORANGE Similarily I can do this for other colour mixtures and create a secondary palette

Its not perfect, but its FREE !!

So far I have been using

but I guess I can extend it to a mixture of not only the vibrant colours like... ORANGE = RED + YELLOW

I am not sure how many colours are usable, but this seems to open up quite a few more possibilities for me

latest video - please excuse the interference pattern, it improves on the close up shot

All this looks really interesting, thanks for sharing. One question - How is the 32MHz clock used exactly? Do you overclock the ATtiny, send the signal directly to the VGA and prescale on the ATtiny... ?

I connect a 32mhz crystal oscillator with TTL level output directly into Pin 2 of the attiny85. my boards.txt file has this entry

and thats pretty much it to get the t85 overclocked

The vSync & hSync are created from timer0, and the pixel generation made from exact clock timings

Wow, I didn’t know the ATtiny85 could be pushed so far above specs. There are probably other scenarios where this can be handy!

Its pretty much as much as it can do in one go as the VGA signalling takes up a fair bit of processing time - the 'early video' creates a 48*48*8 colour picture with very little spare time outside the interrupt for processing of 'normal' code... the second video requires some tiny no-op loops but is basically uninterruptable when drawing/rendering video pictures

I like to try and squeeze every last ounce of blood out of these little jiggers, and its great that they cost so little too

One slight correction about the colours, I am working on a algorithm to create 16 colours rather than 64 (as mentioned) - I looked at some of the colour involving more black or white and they didnt look so great so I am omitting them for the time being

My next challenge is to create indexable colour going HORIZONTALLY, which is much harder than vertically as there is so little time to change between colours as the line is being rendered AND without disturbing the timing, the last thing I want is lines to look rickety !!

Been working on colour dithering today…

between each primary there is another colour, by ORing two primaries together you can get the other colours

Here is a list of colour I put into an array

If you alternate any of the above colours with the colour next to it on an adjacent video line you will get a dithered colour. This will be a colour between the first and the second, but only really viewable from a distance

Seems to work quite nicely, see pic for more details

I shall probably manage that resolution with such little RAM by creating a ROWS/COLUMNS coincidence array for red green and blue, that will take 30 bytes in total for that resolution in 8 colours

Watch this space for a video soon :astonished:

Hey, nice to see another Mad Hacker pushing an ATiny to do VGA!

I have made serious progress since my last attempt... 170x240 with 8 colors!!! Will post example code soon. 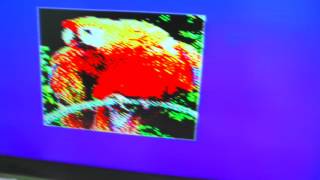 I have some videos on youtube, but this one is my most recent, typical UNO at 16MHz with 17bit colour

It's amazing how far an AVR will go. 40MHz was no problem for the ATiny. I decided to push it to a safe "36MHz" now. Here is the little 512 byte ATiny doing Amiga Boing...

On the other end of the AVR scale, XMega can easily reach 68Mhz. Over 70MHz, it's a bit unstable.

Anyhow, keep up the great work, I will probably contact you again as I am starting a website just for Video / Audio micro-controller project and would like to show off your work.

Wow, really like your bouncing ball, its incredible how far you can push.. never tried 40mhz, 32 was always my tops !!

Please contact me, I can always do a few better videos (I always seemed to rush them in one take ha ha)