I’ve been fiddling about with a rotary encoder and my Arduino with pretty hopeless results. I’ve done plenty of Googling and tried various different approaches including the basic one detailed in the Playground page for rotary encoders, using interrupts and a very clever one that used some analog pins and some seriously indecipherable code!

The various problems I’ve been having include detection in one direction only, no response at all, too many turns needed than is practical and of course some horrendous bouncing!

First of all it’s worth saying that the encoder I’ve used may well be rubbish or even faulty. It was salvaged from a dead Akai Sampler. So I’ve ordered an Alps STEC12E08 which is specifically named in some examples as working well and hopefully that’ll be Ok. 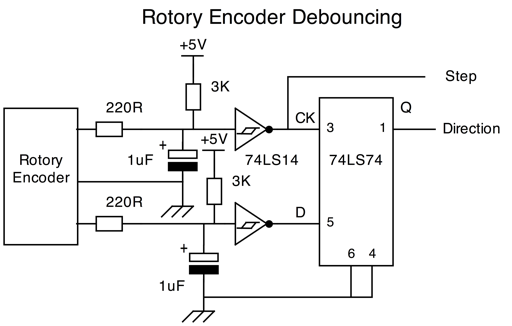 Although you can just use the capacitors the Schmidt input inverters clean things up and the 74LS74 gives you simple step and direction pulses without any software at all.