I am an artist creating an installation sculpture. In brief, the project will consist of multiple clear acrylic rods set up vertically in a grid with an RGB LED underneath/inset into the bottom of each rod. The intention is that these LED's will illuminate the acrylic rods and with the use of some coding/arduino board and a microphone, they will respond to the sound around the piece and change color accordingly (red for loudest, blue for quietest).

I don't have an exact number for how many LED's I will use at the moment, but I am imagining somewhere between 40-60. I was told that an Arduino Uno would be fine so I went ahead and bought one. I planned to use a wall socket as a power supply with a step down transformer.

I have a few questions and would love any feedback possible:

Basically if any of the above doesn't make sense or looks to be a real problems issue I would love to know!

If you have discrete LEDs, use common anode and then use shift register to sink current thru the cathodes. Do you need more than white, red, green, blue, red+green, red+blue, green+blue, off?
If not, then a shift register board like this one with 96 cathode-drive outputs can drive 32 LEDs, and can be daisy chained for 64 LEDs.

If you need PWM for each color for more color choices (like 1/2 red, 1/4 green, 1/3 blue) then you need a chip like WS2803, can drive 6 LEDs each with 256 levels, or TLC5490, 5 LEDs with 4K levels.
Or you may want to look at LED strings with individually controllable RGB LEDs controlled in different ways from an Arduino serial data stream.

@crossroads and @mirith thanks for the help. I have since researched a bit about multiplexing and its starting to make some more sense...essentially I am creating an LED matrix (something that for some reason only just occurred to me)

@mirith - Is a wall wart just like a cell phone charger or something like that? Does this go straight into my arduino? If so then i think blackberry or apple charger could just plug right in using the usb slot.

A quick note: The installation has now grown in size to 120 LEDs - presumably I just need to daisy chain drivers/registers together depending on how many they can power?

@crossroads - I dont think i will need anymore color choices than what is standard. It seems as if that would just make it more complicated and with my time frame and limited knowledge, I am more focused on just getting the piece to function - in truth, the exact colors are somewhat arbitrary so don't really matter too much

*Apologies is any of this is totally wrong/doesn't make sense!

Forgot to post the board I referenced above:
http://www.crossroadsfencing.com/BobuinoRev17/ 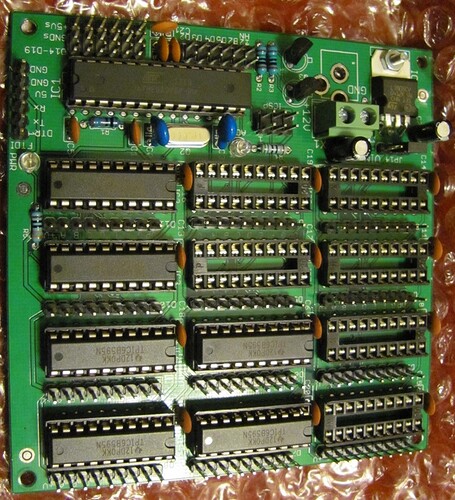 If you want it matrix-like, RGB complicates that. With MAX7219 & common cathode devices, you can connect up two per columns and use a board like this to connect them up easily, drive 16 LEDs per board, and daisy chain 4 boards for 64 LEDs.