A bit adventurous for a home brew but I thought I’d look into the issue of a walking biped robot. To make my life easier I wanted to power the legs by continuous rotation of a motor - adjusting gait and speed with mechanical adjustments to leverage and motor speed… Hmmm

It looked to me like walking gaits had been pretty well mastered and I found some very realistic walkers on the Internet.

Starting somewhere I decided to look at getting the running gait sorted (theoretically of course) before even contemplating anything else as walking could hopefully be ‘’‘scaled down’’’ with less movement, slower pace and so on. Therefore I started with a running gait

Look forward to seeing your progress.

Good point. I’ll get some of these for Albot.

They’ve had such good reviews

One motor, as I recall. Fell over easily.

I'm aiming for low inertia - so keeping as much mechanics out of the legs is important - this is just like the benefits of reducing unsprung weight in wheeled vehicles.

Mind you there have been some great successes with a more robust approach... 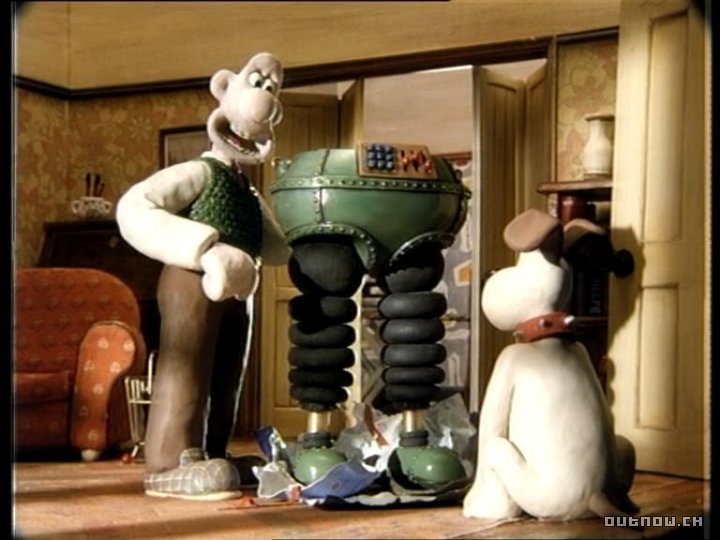 Sorry image seems to have been lost... try again.

oric_dan: One motor, as I recall. Fell over easily.

The reason Jimmie Neutron fell over was because it was top-heavy. Would have been better, actually, to have had more weight in the feet, such as the batteries.

As regards the linkages, as I recall, there was only a single linkage piece that went from the hip down to the feet to operate the whole thing, and it worked completely off of a single motor that went round 360-degrees continuously, as normal, like you were talking about initially. Very simple mechanism, if you could run down a schematic. That’s why I mentioned it in the first place. All those plastic pieces could easily be replaced by circular rods.

Sounds nice, but OTOH, such simplistic mechanisms are just not very robust - ie, fall over easily. Anything in nature that used anything so simple would have been selected against by evolution 500MYA, ;-).

FWIW, David Buckley has been in the business of designing simple bipeds for a long time now.
http://davidbuckley.net/DB/index.htm

I’m not sure where this project is going but it started out by me thinking about what I would consider useful parameters in designing a walking bipedal robot. Below is what sprung to mind and so inspired me to have a stab at the mechanical end of the problem and hence the running legs design (and as I have said I have done a more perambulatory walking design to ensure stability).

These are some of my driving thoughts, most of which are to do with weight saving, momentum and inertia:-

Minimise the mass of the legs. Strong enough to hold the robot and move it but no extra for actuators if possible. When the actuators are in the legs, the legs get heavier to deal with having to move the legs and their servos. As the legs get heavier the servos get bigger and so on. Keep the masses nearer to the hips and further from the feet.

Lower mass legs will swing more easily with lower momentum and inertia changes to deal with. Consequently the robot will suffer less from these mass/velocity changes as it moves, especially if the mass can be moved into the body area. I also have a swinging body/arm linked to the main driving motor to assist in countering the leg swing and stabilise linear momentum changes of the robot as a whole.

Continuously running motive force - compare running motor with stop/start/reverse servos. This can reduce the loading on some of the ‘joints’ and hence make for weight saving. It still requires speed changes but these are of the same order as the speed change of the entire robot and not of the stop/start/new direction of the legs which is pretty rapid.

Gait changes are the difficult thing to achieve with minimal actuators and my latest model allows changing the internal leverages... but the robot currently doesn’t walk as nicely as it runs :(.

Also it will have to deal with variations required by left and right legs in dealing with lumps and bumps and other external forces as well as its own balancing (to be done with body orientation changes as well as roll gait changes) but in the main these are synchronised for most activities.

Stall protection (such as a locked leg when falling over or excessive loading) can be provided by a clutch device on the main motor drive. Stall protection can mean the robot doesn't have to be strong enough to stop its own actuators from breaking itself apart.

Servos are used to control the leverage ratios of the linkages thereby meaning they have lower force requirements and are therefore smaller/lighter.

This comes mostly from an automaton/animatronics perspective which would add a control system (mechanics and software) on top of it.

This is a shed load of work but I may try to build a physical model depending on what else I’m working on, my energy and enthusiasm but I will refine the software model (as this can be done easily during tea in the kitchen!).

The modelling work is basically more of an art than a science as predicting the detail changes that happen are impossible even with small changes but there are some pretty impressive automatons (created by people a lot smarter and more persistent than me) - look at this one!!! The Silver Swan. I have seen it and it is mind blowing. http://www.thebowesmuseum.org.uk/collections/the-silver-swan/history/

Bipeds are especially tough. All of your considerations are valid, and if you seriously mine the literature, you'll find a shed load of academic research on this topic. Many people, like Iguana, work on the mechanisms for years and haven't gotten very far (although I've not followed more recent work).

Rodney Brooks, the MIT robot guy, famously said "simulations are always doomed to [u]succeed[/u]", but when you build in the real-world, it's a completely different story. This is more so for biped walkers than anything else. Real-world physics is a real b*t*h.

You might also look at the MIT LegLab site, and also Boston Dynamics. Marc Raibert has been doing fundamental walker research for about 25 years now. And Honda spent several $100,000,000 and 15 years or so developing Asimo, and it barely toddles along.

Another thing to look at are Passive-Dynamic walkers. These specifically are designed to take advantage of real-world physics from the get-go, albeit their designs and linkage systems are not overly robust in terms of stability.

Not discovered Rodney Brooks before, thanks for the info. Nor passive-dynamic, at least not with that label but now I can find more stuff…
My runner mechanism has a more swinging gait now but spends more time with foot on ground during the cycle and has rationalised the motive force into a single motor. I also added a foot articulated at the ankle on the earlier design which helped the contact period and this was linked back to the body rather than the leg. I’m now trying to get it on the latest design but it’s taking longer than my wife shopping for shoes.

I have an advantage over Honda in that I don’t have to succeed at anything (I assume there is some expectation of success there) and take joy in even the little that I do achieve even if it’s just theoretical ramblings.

This is MUCH easier to do with hexapods than bipeds - like 1000X easier. Besides the extra hip joint in Petman, look up Robert Full's Poly-pedal lab at Berkeley, and the concept of "preflexes" = natural mechanical dynamics.

I've been studying locomotion for 10+ years now, and built 6 or more walkers, mostly quads and a couple of hexapods, plus one biped like David Buckley's Loki. Quads are fun, since their gaits are half-static and half-dynamic stability, and they don't fall over all the way either.

EDIT: For the roboticist, bipedal walking is more a systems-level problem than actually "mindless", like with humans, who have 10,000,000,000 brain cells and 20,000,000 or more muscle fibers to recruit and train for walking. The following book has a chapter about development of walkers, especially Asimo as I recall, and they mention in there a serious AHA moment. They tried all kinds of things to get the biped's walking stable, and finally discovered the best and simplest way was to push the "gut" forwards and backwards to make compensatory movements. Try to figure that one without going into the field, and actually trying things. Before that, you'd think of things like bend the knees and ankles, move the shoulders, flex the back and neck, swing the tail [if you're a cat or dog], on and on. http://www.amazon.com/Loving-Machine-Science-Japanese-Robots/dp/B001SARCOI

This is very interesting stuff. I've been in need of cerebral stimulation

Have ordered the book from UK Amazon, can't wait

Ah, the UK. If you're anywheres near Manchester, David Buckley hangs out at the FabLab there on weekends.. There is another guy, Peter Balch [website under same name] who wrote a leg kinematics simulation a few years ago, similar to what you showed earlier, but I couldn't find it on his website. There were long [interesting] discussions on this stuff with these guys on the Seattle Robotics Society Yahoo forum 4-5 years ago, but it died out.