I am doing a mini project that involves controlling about 60 LEDs as a runway strip. one LED comes on after the other. I want to stop the program after the last LED is lit.

I have some experience in EE and very minimal knowledge of programming. I already have a working program for 3 LEDs but I know I don't have enough power to drive all of them. I was looking into a 74HC595 shift register and also a FET but I haven't used FETs before. Any help would be greatly appreciated!!!

How far apart are they?
If a real strip, you really need LEDs with a controller for each, either as a chip, or built into the chip. Then you send out a string of basically of 60 messages that each chip passes along to the next, and when the data stops flowing each chip performs to the last message it recieved.
See the WS2812 here and the individual boards and the strips below it. WS2811 is a seperate controller chip only that does the same. There are other LED strips with similar controllers as well. 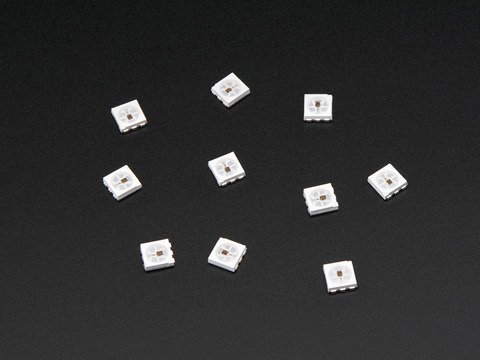 Make your own smart LED arrangement with the same integrated LED that is used in our NeoPixel strip and pixels. This tiny 5050 (5mm x 5mm) RGB LED is fairly easy to solder and is the most ...

I appreciate the help!!! each LED can be an inch apart. but the WS2811 is exactly what i was looking for.
basically what i want to do is turn each of them on one by one and when its at the end, the LEDs would flash in the opposite direction and the code would stop once it reaches the starting point. also button activated...