Hi all,
I'm searching for a solution to generate S0 Signals. I'm reading the energy consumption from the Smartmeter (EHZ) and want to send the current energyconsumption with S0 signals to another device.

Reading the EHZ is no problem, but It's getting a bit tricky to generate the S0 output:

The Basic:
One positive pulse is always 30ms long. The low time depends on the current energy consumption, but must be >30ms also, plus 5ms each slope change gives 70ms min. periodlength. This gives a max. frequency of about ~15Hz.

The S0 pulses are weightet. This is individual from device to device like 1000 Pulses per kWh.

I think it would be possible to do this with delay loops, but I want the arduino also doing other things, so I would like to solve it with timers and interrupts if this is possible. I have not worked with the timers except the arduino based basic funktions like tone() PWM and so on. But these seems to be very specific.

Could you maybee give me a hint how to do this with timers? or is there a other way to let this the arduino do in background?

Thank you very much in advanced!

Look at the example Several Things at the same time to see how to break your code up into small bits so you can be transmitting this information and doing other things.

SO.. are you looking for a binary output? No? It sounds like you are looking for something that could follow a timed voltage profile as a signal.

Here's something that seems to work on an Uno, if I interpret your description properly.

It's basic S0 output on the LED for visuals. You'd call the S0Signal(...) function frequently with the latest kWh value as the parameter.

Hi all,
first of all thanks for your effort.

I try to explain the S0 signal. It's used to read out energymeters. It's digital (high/ low). The high pulse is always 30ms long. The low pulse is also minimum 30ms long. Just for example this would indicate 60kWh usage at time. (1/0,06 * 60sec * 60min / 1000 Pulses/kWh). The longer the low pulse, the lower the indicated power consumtion at the moment.

@hzrnbgy: I'm not sure if I understood you correct, but It's not like I've got 0,3kw to "transfere" and then need to wait 5 Min. to do that. It's like the pulses are indicating the power consumtion right now in presence. Only at a constant power consumtion for one hour of maybee 0,3 kWh it would be static 5 Pulses per Minute..

The other thing is, my loop() is not as fast as the "statemachine" examples sugest. There is also very delaying code for sending on LAN and waiting sometimes. So I can't call the S0Signal() like @Blackfin expected within the loop() because I expect the loop() to be sometimes slower than 30ms.
I'm thinking of a solution like from @Backfin but beeing called from timer/ interrupt driven. I suggest, it will then be independent of what's loop() doing.

I started to sketch it, but the ISR_S0() is not called yet. There I'd like to use timer2 to do this.

Do you think this will be a solid solution?
BR
Chris

Which Arduino are you using?

I don't suppose that the OP did a internet thingy using the words "c++ read smart meter ehz"?

The interrupt for the timer fires roughly every 4mS and the ISR execution time measures out at around 5uS so it's taking 0.12% of the processor time.

This example uses a fixed value for the kWh reading. It is "updated" in ReadEnergy() once every 100mS. You'll have to add your own EHZ reading logic in place of the fixed test value.

It doesn't update the S0 signal with the new energy value until the next falling edge of the 30mS start pulse. It can be modified to update on the fly but it would add complexity to the ISR.

Hi Blackfin,
first thank you so much! Your solution is even better than I was thinking about! It's hard to follow your code, but It's greate for me to learn how to make things better.
I was thinging of using the timer just as periodic trigger. But you're using the timer directly for high and low time individually...

I checked the output on the oscilloscope (picture attached)

Just for interest, you're using static variables within functions. Is this different to using global variables? Are there advantages/ disadvantages?

Thanks again and
BR
Chris 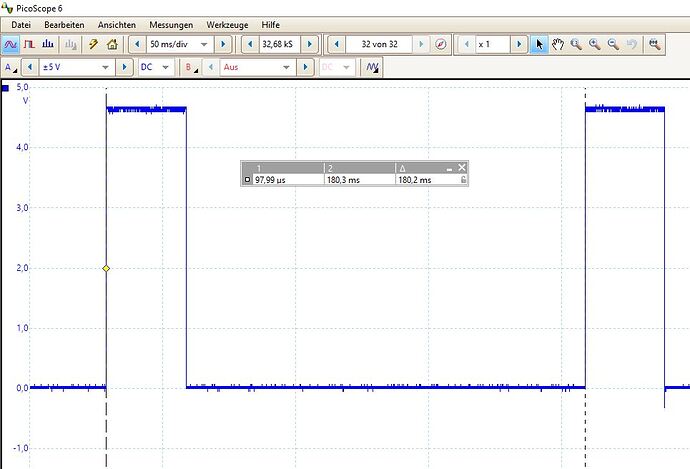 ard24:
Just for interest, you're using static variables within functions. Is this different to using global variables? Are there advantages/ disadvantages?

From a memory usage perspective, it's no different. Variables declared as global (i.e. outside a function) and those declared static within functions occupy memory in the same way; they're persistent during the execution of the program.

But those declared as static within a function are "visible" only to that function so there's a degree of protection against them being inadvertently modified somewhere else in the code. This can be beneficial in bigger programs with multiple source files. So you get the benefit of persistence when a function exits (to maintain a state or a time/count value etc) but also that protection. On a personal note code -- especially larger more complex code -- is easier to follow if variables used in a specific function are declared within that function.

If you zoom in to a function level you may see furtherance of this thinking where a variable is declared within a specific part of a function. For example, in the ReadEnergy function:

Those being fkWh and kWhTicks. Those two are visible only within the if( (timeNow... ) statement braces. In this particular function there's not really a critical nor protective need to isolate these variables this way, it just makes the code a bit clearer to the reader.

One could argue, I guess, that if declared globally (within the scope of ReadEnergy()) the processor must make space on the stack for these two variables each time the code is called which occupies a few machine cycles which are needlessly wasted cycles that are really needed only once every 100mS.

Anyway, if you need any help understanding the code feel free to PM me. I usually try to be more verbose in my comments but sometimes just get lazy.