I've completed my most-recent project which basically tells me when the International Space Station (ISS) is overhead my home, and whether or not it will be visible. It consists of 2 pieces - firstly a Python app that scrapes data from a website and transmits customised data via XBee modules to an Arduino-based (Ardweeny) remote unit with a LCD and RGB LED. I've designed this in such a way as it can be configured to track a number of different satellite (eg changing it to track the Hubble Space Telescope would take about 30 seconds changing a config file for the Python app). 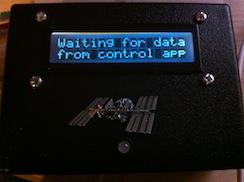 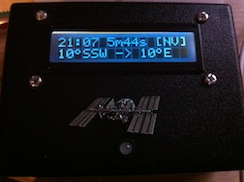 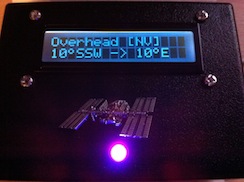 I've written the project up in more detail here.

My young kids love the RGB LED - they go a little nuts with the pulsing green light - meaning the next pass will be visible to the eye, and flip-out with the pulsing purple meaning the ISS is overhead! We've made quite a few trips outside to watch the ISS pass through the night sky. It's such an amazing achievement for mankind to have this first real home-away-from-home, and seeing the wonder in my kids eyes as they stare up at it pass over our home is a lovely feeling.

That is really cool!

I want to build a camera tracker so I can do this a little better http://www.youtube.com/embed/mauXAFz4yKk

I run Predict in server mode on my Linux box, it outputs the tracking data on port 1280. With either a ethernet or WiFi shield I'll "listen" and control a pan and tilt mount for my video camera.

One thing, when running Predict, make sure you remember it is running! The number of times I've nearly jumped out of my skin when the voice out of nowhere says,

"This is Predict, satellite is at n degrees and approaching"

I swear I have a few more white/gray hairs coz of it!

Damn! I'd never heard of Predict before! Must get out from under this rock more often!

Gonna have to check it out and see if it'll run on a Mac!

Cheers for the tip!

My kids haven't bored of my little setup yet - they still lose their minds when the LED arcs up... :-)

The other program I run, either on my DR-DOS machine (DX4-100) or under DOSEMU is STSPLUS.
You will be able to run a DOS emulator on your Mac like my mate does.

Awesome project. Has given me some ideas myself. I can well imagine my kids doing the same as yours. ;)

For those without a Satellite Notification System and who are on twitter, follow @twisst and it will give you ISS pass notifications based on the location you have set in your twitter profile.

If you're game for a bit more work you can see way more than the ISS. http://arduino.cc/forum/index.php/topic,72921.0.html

I was wondering if you could me write a python program similar to yours? I don't need it control the arduino - I just wanted a small program to tell me the over head passes at my location!

See also http://open-notify.org/ a guy who has got some serious kickstarter backing to create something similar, which I spotted the other day.

Personally I prefer yours pocketscience ;)

I was wondering if you could me write a python program similar to yours? I don't need it control the arduino - I just wanted a small program to tell me the over head passes at my location!

perhaps the Heavens Above web site directly would give you what you want without Python http://www.heavens-above.com/allsats.asp?lat=45.467&lng=-75.517&alt=0&loc=Orleans&TZ=EST&Mag=3.5