My project requires a lot of user input options -- lots and lots of buttons, mounted in some easy-to-see and easy-to-press configuration.

So I'm trawling Ebay looking for prefabricated controller devices with tons of buttons -- like 20? -- button-bars, button strips, arcade controllers, etc. So far not finding anything exciting. I can build one from scratch, but it will be much faster if I can find some cheap obsolete game controller or toy to rip apart and re-use.

Tons of old gamepads out there... but not enough buttons on those, and I really need a more console-like layout, preferably long and horizontal, not something you grip all the time. User will be holding other control devices (wiichucks most likely) and briefly selecting options by pressing buttons, moving switches etc.

would be nice, but it's a bit too big and clunky (and spendy!)

I have considered J-random remote control, disabling the IR and hardwiring all those handy buttons to an i2c breakout, but they are very small and fiddly and hard to read in halflight (this is a gaming setup I'm building).

If anyone has been down this route before and and found a good deal (lots of momentary pushbuttons in one handy semi-ergonomic flat-panel package), could you mention a brand/model? it's tough finding useful surplus stuff without mfr specific keywords

Hi,
NOT what you asked for, but 5 high quality buttons that use only 1 Arduino Analog input are Like These: 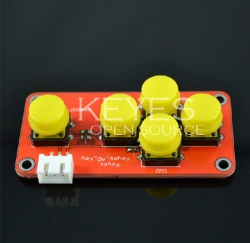 You can remove some buttons; sometimes I just use 4.

I think this is a good start 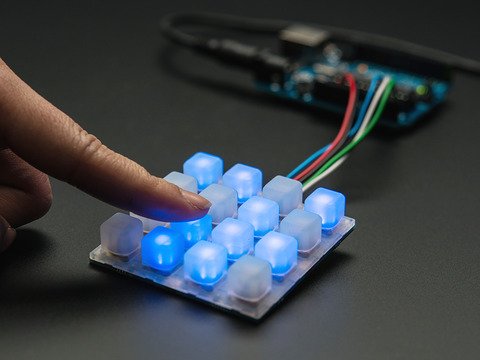 This item is just for the Trellis driver PCB assembly: LEDs and buttons not included. Trellis is an open source backlight keypad driver system. It is easy to use, works with any 3mm LEDs and ...

feedback leds -- good feature. i2c control, just what the hacker ordered. a little spendy -- but compared to the time investment in from-scratch DIY, not so bad. with these 16 buttons as the core, I can add a few extra switches on either side and have ample user input. looks like with a little ingenuity I could sneak my own labels into the silicon keycaps, as well (print on transparency stock, cut to size...) and different coloured leds could indicate different function groups.

still interested in salvage and surplus -- but I think for this project which is rolling along quite rapidly now, I'll go with the adafruit 4x4 matrix which I can get by mail in a matter of days.

Your adafruit link is only part of the full solution; you need to get the switch portion separately.

Yup you can get the PCB plus keypad as a kit from Adafruit. About $20 iirc, not bad. Have to add your own LEDs but 3mm leds are cheap as dirt

I had thought about a keyboard but it seemed kind of big/clunky... 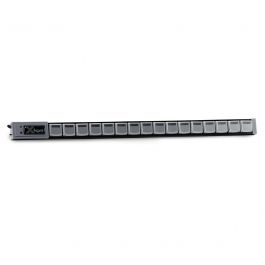 I like that 16 button stick, but jeepers. $100 US! My whole project costs less than that in parts