I gave the arduino power via usb, and then place the sensor shield on top of the arduino. I then connected a 6v battery pack(4 d cells) to a switching regulator and stepped down the voltage to 5v. This is the regulator

The output of it connects to my sensor sheild cause the shield couldn't take 6v hence why I used the regulator. Now I have a servo MG996r connected to the sheild:

Hobbyking - the world's No1 Online Hobby Store. We stock a huge selection of RC products from Planes right through to Drones and all accessories. Visit Us Today.

I ran a simple sweep program to go from 0-180 degrees and back, I actually got it from the arduino website.
Now the servo goes from 0-180 degrees, then stops and then for some reason the power light on the sensor shield gets really dim almost like if there is a short.

Now when I connected a smaller less powerful servo, it was basically working like I wanted it to. It went from 0-180 and from 180-0, and repeated over an over.

Im just curious to know as to why only the high torque servo this strange phoneme is happening to when I have all the current(2.8amps from battery pack,) and the voltage requirements needed??

***Note the mg996r stall current is 2.5A at 6v, and I set my regulator to have 2.8amps with 5v.
***And if your wondering why I am using a regulator instead of one of those big DC power supplies it was to avoid paying like $50

Some servos will be able to travel 180 degrees. Some won't. It may be hitting its end stop and stalling. Have you checked the battery voltage when this happens?

edit: Have you tried using microseconds rather than an angle? Vary the servo from 1000 to 2000 microseconds. Does it stall then?

This is on that servo page: Operating voltage 4.8-7.2V

Are you sure the D-cells are fresh, and are able to produce that current.
One way to measure that is with a DMM on the 20Amp range.
Briefly measure the short circuit current of a single 1.5volt cell.
It should be ~10Amp, depending on the resistance of your DMM leads.
Warning... Don't do this with e.g. a LiPo cell.!
Leo..

@surfertim
Ok I tried using the microseconds, it does the same thing. Moves at the desired position, then stops, and finally the power light on the sensor shield gets really dim(does not turn off).

I check the battery pack voltage before it goes into my switching regulator its 6v which is good, then the voltage where the regulator goes into the sensor sheild to power it, and thats 5v, which is also good.

I also forgot to mention when I take out the servo from the servo shield after the light goes dim, THE SENSOR SHEILDS light goes back to normal(being bright), LOL. I am so clueless right now.

Wawa:
This is on that servo page: Operating voltage 4.8-7.2V

Ye this has been done. I already measured my current output of my regulator an set it to 2.8amps which is more than enough. I need the regulator because my pack is 6V and my sensor shield is 5V. So i needed it to step down. I also dont have to worry about the voltage drops because the regulator keeps it at 5v, despite the current the servo pulls(this has been tested and stated on its specs thats why its called constant volt/current regualtor), since the SERVO has a stall current of 2.5a and operating current of 1amp.

No I didn't, but I feel like my sensor shield is bad, because the indicator led(for power) only turns on when I connect it to my Arduino, but when I connected the battery pack to the regulator then that to the sensor shield's external VCC an GRND screws, it doesn't light up, meaning the connectors to give it external power isn't working(I assume).

edit: Yup I just confirmed this. I connected my 5v regulators output(tested output) to the sensor shield(by itself no arduino), and tested the V and G pins that the servos connect to, and none have any voltage. So I am guessing the only way for the board to receive voltage and current is from the Arduino and there isn't enough current to run this particular servo.

That shield has no intelligence. Just two LEDs and a reset switch.
It's just an easy way to connect things to the Arduino.

Did you remove that jumper, to separate the Arduino supply from the external supply.

I don't see any problems in connecting 6volt directly to the screw terminal if the jumper is removed.
Leo..

OOOO crap...You are right, I did not remove the SEL jumper, which is 2 pins next to the external input. How do I remove it though? Do I unsolder both pins or can I just rip them off the board? AND FYI im pretty sure this is why the board isn't getting the extra power.

Just pull it off. The jumper just shorts 5volt from the Arduino and 5volt of the external power.
Could be potentially unhealthy for the Arduino if you leave the jumper on.
With the jumper removed, you can use straight 6volt battery power on the screw terminals.
Leo..

Removing the jumper made no difference. There is still 0v at the pin connectors for the servo an when I run the code the servos move to a position depending on what second, usually 1000-2000 micro, and then stops, then the led on the sensor shield goes dim. For some reason it wont take angle positions in the code.

Should I just get another board? Or can you just suggest me another servo sheild that can handle an mg996r and a 5521mg servos for arduino?

Here is an image of the SEL pins. I took off the jumper(that black thing between the two pins).
Do you also want me to take off the pins? 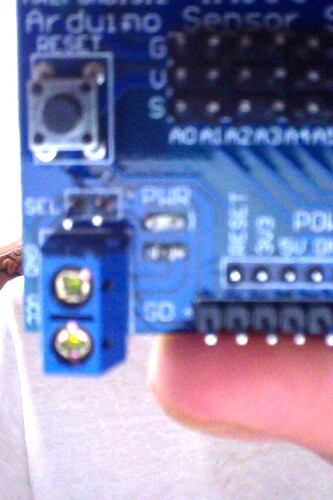 Can you connect the power supply directly to one of the three pin servo connectors? They are labeled "G V S". Those are the ones you are checking the voltage on, correct? Connect power supply ground to "G" and V+ to "V". If you use an ESC with a BEC, it supplies power to the servos that way.

You are the man. I connected the power supply directly to those pins on the board V and G, and test most of them, and there were getting voltage, then I connected my servo and it was working, although not for long, since my connection was two wires(I'll buy some connectors for it), but the main thing is the sensor shield Power light does not go out or dim. Thanks man.