OK, next problem: anybody seen a servo symbol for Eagle? I found a DC motor symbol in the libraries but nothing yet for a 3 wire servomotor.

Just put a 3-pin header in your circuit. Servos aren't components that actually go on the PCB, their wires are soldered on, so all you need are the holes.

I'm not designing a PCB. I'm designing an Arduino-driven display. I need symbols for the external devices that I'm connecting to the Arduino board. Switches and LEDs I've found in the libraries; servos and power supplies aren't.

Exactly, because they're never included in the schematic as actual components, they are external devices as you said yourself. You put the actual amount of pins needed to drive it. If the servo uses 3 wires, then add a 3-pin header. If it uses 4, use a 4-pin header. Same thing for power supplies, they don't get included. Instead, you add a 2-pin header where you solder the VCC and GND leads on. Same goes for LCD displays, and many other components.

rtjones:
I'm not designing a PCB. I'm designing an Arduino-driven display. I need symbols for the external devices that I'm connecting to the Arduino board. Switches and LEDs I've found in the libraries; servos and power supplies aren't.

What are you using Eagle for?

Eagle is great when you want to design a circuit with the purpose of building a circuit board. Typically, you run your design through some CAM processor, and send the resulting output files to some contractor that will make your PCBs, and perhaps populate those PCBs with components.
As a second artifact, you will also get schematics that document your design. You can use this to communicate concepts to other people, without the physical device being included.

If you are using Eagle as a "drawing program" to create those schematics, rather than to produce PCB files, then the first thing you can do is to just add in text to represent the objects. The second thing you can do is create your own library. Create a library file in your eagle folder, then "use" that library, then "open" that library. Now you can select packages/symbols/devices by name, and if you type in a name that does not exist in this library, you're asked to create it. You can then draw into a drawing surface as much as you want, including adding pins for inputs/outputs, and areas where names and values will go. There are tutorials for this (google something like "eagle custom library") that will make it easy.

If you're using Eagle to make PCBs, you really don't want to solder in the servos on the PCB. Thus, you want some connection to the PCB. This means you search for "header" in the parts library, and select a header of the appropriate pitch/size/mechanical layout, and use that part. Label it "Servo A" or "Speaker C" or whatever, and use that in the design. In the schematic, you'll see a connector symbol, not a servo (or speaker) symbol, but that's OK -- you're designing a PCB, not a complete system.

The schematic I am making for the display I am building is basically a full system schematic, so yes, I want to include every component from the AC plug through the power supply and Arduino, all input devices and all output devices. I want to fully document the entire electrical system for reference in case I need to troubleshoot something or modify it in the future. I don't want to have to rely on the infallibility of my memory, which isn't, in such cases.

What you want is to create a new library, with a new symbol (which is where you draw your thing), and a new device (which is what you add in the schematic).
Additionally, you may want to create a new package, which is what will go onto the board for the symbol in question. However, because Eagle really is for making PCBs, if you add packages for "documentation" purposes, then you'll have a hard time actually building the PCB out of it...

I'm beginning to get the feeling that Eagle really is not the software that I need. Is there another freeware schematic-only drawing package that isn't encumbered with the PCB making tools? I really have no use whatsoever for the PCB stuff, just the schematic drawing features.

rtjones:
I'm beginning to get the feeling that Eagle really is not the software that I need. Is there another freeware schematic-only drawing package that isn't encumbered with the PCB making tools? I really have no use whatsoever for the PCB stuff, just the schematic drawing features.

er Eagle is designed for building PCBs, so hardly "encumbered"!

In general, you have your general-purpose drawing programs (inkscape, for instance), and then you have your programs that support both schematic/pcb. There are some simulation packages that might be schematic only, but they're "encumbered" with other things...

Creating an EAGLE device really isn't that hard. I have this, if you want it: 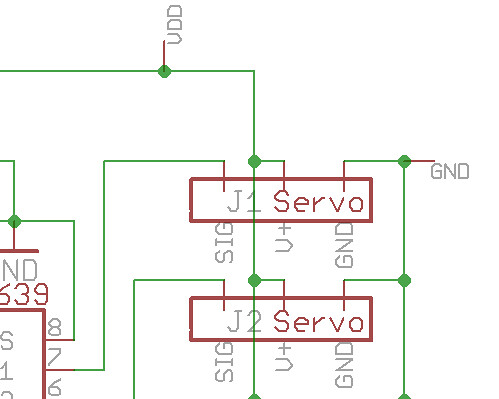 I finished my schematic, to my satisfaction at least, by creating the parts in place with lines and circles, etc. They aren't added to the library, so I can't reuse them in any future project diagrams, but it got me finished with this one. I'm not even sure that the freeware version of Eagle allows adding parts to the libraries. Some of the buttons needed to do that appear to not be enabled and visible here, or else I'm just not looking in the right places.

I'm not even sure that the freeware version of Eagle allows adding parts to the libraries.

It does... Try this tutorial: http://www.instructables.com/id/How-to-make-a-custom-library-part-in-Eagle-CAD-too/

I can't reuse them in any future project diagrams

You can always cut&paste the "drawing" part into a library part.