Hello, I don't know if anyone can help me or not. I am building a loop pedal, I've built it on breadboard at the moment. this is what I've built. It only has one led on it at the moment, this is to show if the loop pedal is in record mode (when lit) and when in play mode (not lit).

I am wanting to build a circuit like this, but I only need 6 common cathodes with 4 push buttons ( a button for each track) 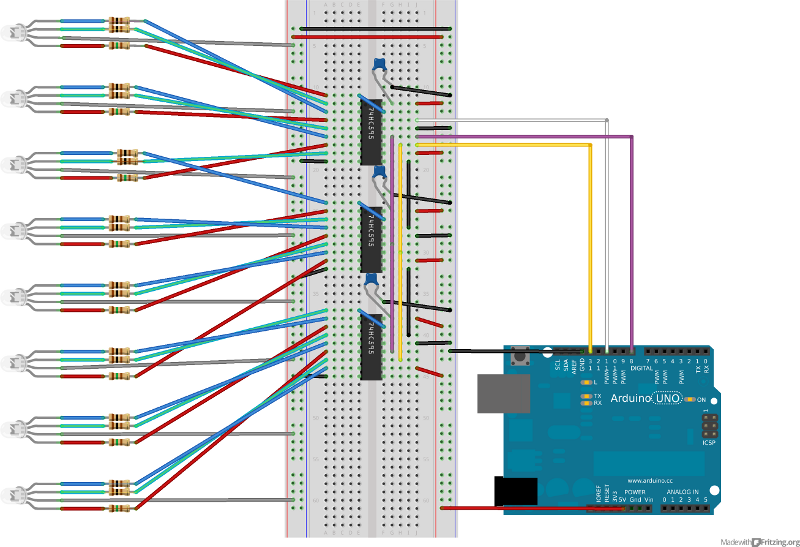 please could someone help me out massively and show me how I would build this on breadboard with a layout image like on fritzing. Any help would be amazing. Thanks

You didn’t show your circuit. Did you forget to post it?

jovid196168: I'm wanting to use common cathodes for these ones.

Same circuit, only the common pin of the LED goes to ground, not to +5volt. Data that you shift out has to match too. A HIGH will now enable the LED.

Show a picture of YOUR setup and code (wrapped in code tags). Leo..

This is my circuit at the moment, I'll be removing the led that is on the circuit which is to show if the pedal is in record mode or play mode. turns on for record mode and turns off in play mode. I've layed it out different to this diagram. But I plan to add a rgb led for each track. I currently have 4 tracks on this circuit (1,2, 3 & 4), for this I need to use a shift register because I'm running out of pins. so I need to add 6 rgb leds like this

This is my code I am running at the moment https://www.dropbox.com/s/zaf11dfbwx39bwl/My_Midi.ino?dl=0

I did have a go at programming, got the led to light up green and red with a push button but it's not correct for what I need it to do.

I have now been told to use bi coloured led's as they light up red and green when the power is reversed. But I don't know what route to go down. I need a little help

Bi-coloured LEDs need two pins (and a resistor) each.

Multiple switches with a resistor network can be connected to one analogue pin.

A digital RGB LED (strip or normal LEDs) uses ONE pin for a whole string of LEDs.

Running out of pins? Analogue pins can also be used as common digital pins. Leo.

I've seen bi colour led's with 3 and 2 legs. Is there any difference? I only need the 6 for 6 pedals. My midi controller has 10 pedals but only need 6 of them to have led's. I probably will need more led's after for the logo but I don't know what I'm doing with that yet. I just want to focus on the pedal led's A 3-pin bi colour LED has a common anode or common cathode. It's like an RGB LED, but with one pin/colour missing.

A 2-pin bi colour LED has internally two LEDs in parallel, but in oppsite directions. Current one way lights one LED, current the other way lights the other one.

Thanks for your reply I have bought bi coloured led's with 3 legs. I'm just not sure how they connect up using shift registers and also buttons to turn them on different colour/off. Done a lot of research on them, just can't find what I need

For three-pin LEDs, the two outer pins are the LEDs. The center pin is the common pin. If they are common cathode, that center pin goes to ground. If common anode, connect it to 5volt.

Not sure what you want from the setup. Press a button, and light up the corresponding LED. Press it again, and change the colour?

You basically send a byte (eight bits) to a shift register. The eight bits representing the resulting output pin states.

I now know how to wire them up now, thank you for the information! just waiting for my parts to come now. I' probably just have to have a go at shift registering with normal led's first. As I've never done it before, the reason why I want them to light up red and green is to show if the current track selected is playing or recording. I've built a midi controller/loop pedal, so I'll have to achieve this with midi controls with the correct midi value as the pedal so there is a mode pedal think it loads into play mode first but if pressed it will then put it into record mode and if it's pressed again it'll go back to play mode. but if in record mode and you press track 1, or track 2, or track 3, or track 4 depending on which track is selected it'll start recording which I will then want the led to light up red above the track. If I press the track 1, or track 2, or track 3, or track 4 depending on which one is selected twice it will play that track so I'd want the led to light up green. It's hard to explain in text