I am trying to power off the arduino via cutting power to the NPN transistor so the accelerometer will accumulate 3.3V on the interrupt until the registers are read thus powering the PNP which wakes the arduino and then the arduino will take over the NPN and power it so it keeps on. After this it will read the register of the accelerometer and so the PNP will become off. The arduino does it's job and then cuts the power to NPN thus powering itself off. And the cycle repeats.

The problem is that I seem to get something wrong with the transistors and can't actually get it to work.

Any help is appreciated. 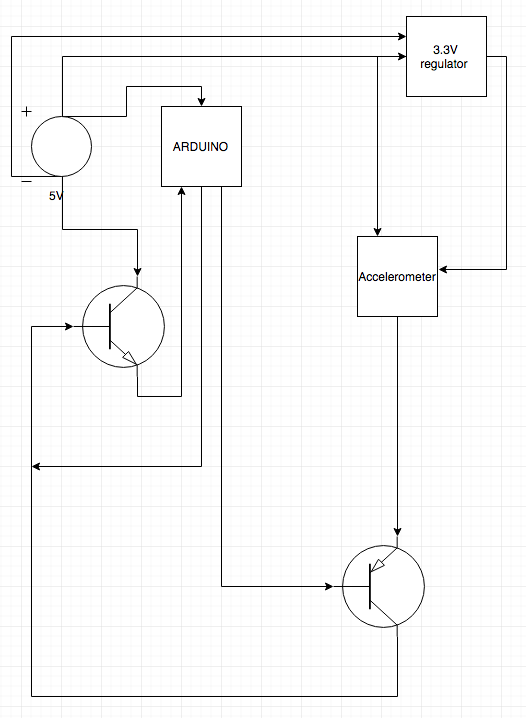 Sorry, but the schematic makes no sense. You need resistors to go with transistors.

There is no reason to use transistors. The accelerometer can wake the Arduino up from sleep, which if done correctly, as described here, is nearly the same as being turned off.

Pretty much everything in this idea is wrong.

What accelerometer? Analog output or digital? Based on you saying "registers" it sounds like a digital one. Voltage does not "accumulate" unless you have an integrator in there, which I don't see. A digital sensor might be able to create an interrupt signal that can be used as an input when there is activity above a certain threshold.

Never apply voltage to an input pin of an unpowered chip.

There's no reason to physically shut off the microcontroller. Get a Pro Mini and use sleep modes.