My group and i are trying to make a simple quadcopter that stabilizes it self.
All it has to do it show that it can hover. The sensor we're using is the memsic 2125 accelerometer, we don't care about drift x y translation, all we care about is being leveled at all times.
So basically when its hovering we want the memsic 2125 to always send the arduino a 50% duty cycle.
How do we program the arduino so it will keep the quad-copter leveled
Again this is just a really basic concept for stability using only a accelerometer.
We have been trying to use a simple p controller to stabilize it but it keeps oscillating. I looked at the aeroquad on google but the code was way over my head. I just need a controller that i can understand the concept of and how to implement it.
Any help will be appreciated
thanks 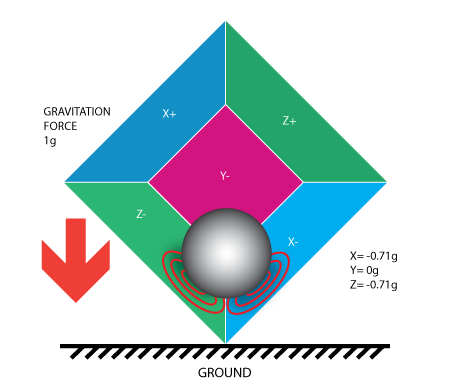 A Guide To using IMU (Accelerometer and Gyroscope Devices) in Embedded...

A Guide To using IMU (Accelerometer and Gyroscope Devices) in Embedded Applications. - This article discussed the theory behind accelerometer and gyroscope devices. It shows a simple  Kalman filter alternative, that allows you to combin...

To summarize, your accelerometer will detect pitch and roll, but not yaw. I suppose yaw isn't that important to you if your only specification is that it's to hover (i.e. it's ok for it to be spinning as it's doing it). But using only an accelerometer, you'll encounter noise, or jitter, and your readings won't be as accurate as they might need to be. That's why folk use a gyroscope, which is more accurate than an accelerometer. The reason a gyroscope is not used on it's own, is because of 'gyro drift', where the gyroscope becomes inaccurate over time due to varying reference voltages.

So, if you want an accurate measurement in both pitch and roll, use an accelerometer and 2 DOF gyro. Have a read here aswell:

FAQ: What's the difference between a gyro and an accelerometer? Do I need both?

[Marc Ramsey gave a fantastically clear and concise answer to a question that's asked here every week, so I'm going to reprint it here with some slight edits as a FAQ that we can link to from the front page.] Q: What's the difference between a gyro...