[Solved] Question about ICSP and SPI

and I had stacked these shield and after 2 days digging, I resolved SPI SS problem
but it’s not clear…

Please look at picture I attached.

How is that possible? 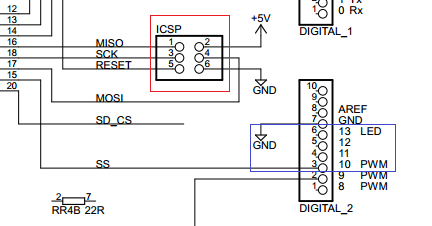 Yes, WiFi shield seems to be connected to arduino through ICSP…

The hardware connection could be made from either set of pins. Most newer shields use the ICSP pins to maintain SPI compatibility with the Mega and the Leonardo.

Why the author of the schematic didn't draw a line
between ICSP and D11~D13 if they are connected ?

Ah ha... I understood.
Thank you for your kindness. It's really helpful.